It's no secret that I'm a fan of (Anni) Ann Margaret Hogan. From her glorious time with Marc Almond, in Marc and The Mamba's, through to  Kickabye, Anni's first solo album which I bought from Selectadisc Nottingham, on its release all those years ago. Too many glorious projects in-between brought me to Honeysuckle Burials, an exquisite work which truly highlighted Anni's ability to produce incredible music, full of emotion, music that stirs, and which I considered and awarded Phacemag's Album of the year 2020.
Ann Margaret Hogan's latest album 'Funeral Cargo' is? Well I'm still taking it all in. So far A4 Returns part 1, is my favourite, followed by the next track 'Wolfswaltzer'. It's incredibly moving music packed with emotion which will assure it lives forever. Whenever I say hello to Anni, I always pass my love on to her piano, I secretly love them both... (but don't tell the piano...) best pauliepaul xx
​

Ann Margaret Hogan’s latest album continues her navigations in to the ancient past via landscape, sound and memory begun on 2020’s Honeysuckle Burials. While that collection was inspired by her exploration of the ancient trackways, burial mounds and iron age hillforts of the Clywdian Range in North Wales, the inspiration for Funeral Cargo lies closer to home: Hogan’s birthplace in Oxton, on The Wirral, where Vikings crossing the sea from Ireland settled around 902AD; and the place where she now resides, looking out onto the Mersey from her home Studio Blue. ​

All but ‘Wolfswaltzer’ – an affectionate tribute to friend and musical collaborator, Kraftwerk’s Wolfgang Flür that its author describes as: “a simple waltz of coffee, food, friends and music”– paint vivid aural pictures.

“Forty generations ago, The Wirral had a thriving Scandi community,” she explains. “There was a Norse parliament at Thingwall; Meols – previously Meir – Sandbank was a Viking sea port, walkable along the coast from me, and a lot of Viking remnants have been found there. Raby Mere, where I used to drive little motor boats as a kid, was a boundary settlement; Thurstaston has the legend of Thor’s Stone, a large red sandstone rock I used to climb as a kid and regularly dog walk now. I found huge inspiration, as you can imagine.”
The eight, mostly improvised, solo piano pieces that trace this ancient landscape of rock, river, sea and sky are augmented by atmospheric field recordings from Hogan’s walks around these shores, the Studio Blue garden and the Wirral docks.
​All but ‘Wolfswaltzer’ – an affectionate tribute to friend and musical collaborator, Kraftwerk’s Wolfgang Flür that its author describes as: “a simple waltz of coffee, food, friends and music”– paint vivid aural pictures. The roiling waters of the river and it’s deep blues undertow, the dancing patterns of sunlight on waves, clouds scudding across luminous estuary skies and the calls of birds on the wing around Studio Blue, where it was recorded last spring as the country first went into lockdown. For Hogan, like all of us entering this strange new reality, it was a time of reflection and solace in nature during that long, warm, sunny season.
​ 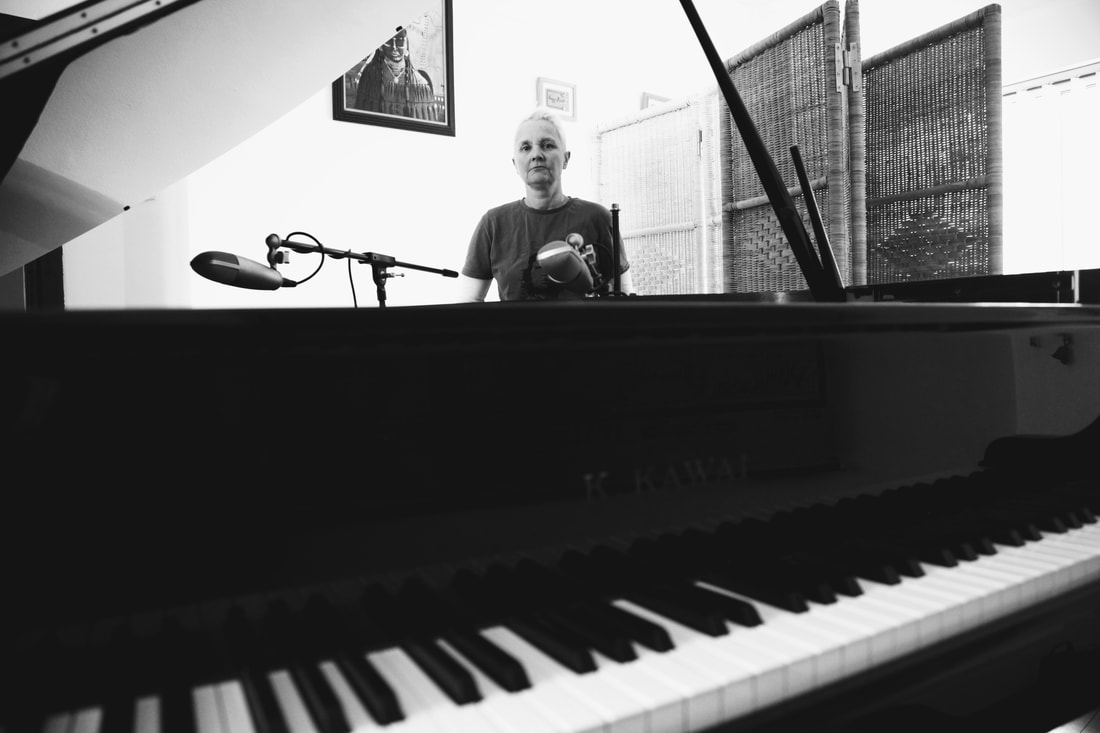 “I was immensely inspired by my local natural world,” she says, “and took very long dog walks, making many field recordings and just feeling the atmospheres. The fog on the docks really inspired the piece ‘Funeral Cargo’ and I actually use a tiny bit of foghorn at the beginning.” Intuiting the ancient past, Hogan suggests the imagery of the title track might echo the symbolism of a Viking funeral. “It might symbolise death – I had images of bodies on boats. But then I felt more it was about the symbolism of fire; burning everything and moving forward.”
The album was mastered by Minimal Waves founder Veronica Vasicka in New York. Cover art is by A.Burnham. It will be on silver moon vinyl.
​