‘Modern Witchcraft’, the follow up to last year’s debut double A-Side  ‘Are You Ready’ and ‘Hell Is Where the Heart Is’, sees the band explore Britain’s lost highways in their darkly psychedelic animation.
​Available digitally at all major outlets, the single comes with a limited edition print based plus a bonus track ‘Black Milk’ recorded in the band’s former residence Nightmare Hall and is available exclusively via Pretty Ugly Records: https://prettyuglyrecords.bandcamp.com

Over the last few months, the SEX CELLS duo of Matt Kilda and Willow Vincent, have been locked in a studio conjuring sonic spells with producer Dave M. Allen (The Cure, Sisters Of Mercy, Yassasin). ‘Modern Witchcraft’ is the first track to emerge from this experimentation and the launch of a series of single releases from their forthcoming  ‘Cheer Up The Apocalypse Is Here’ EP due later in the year. 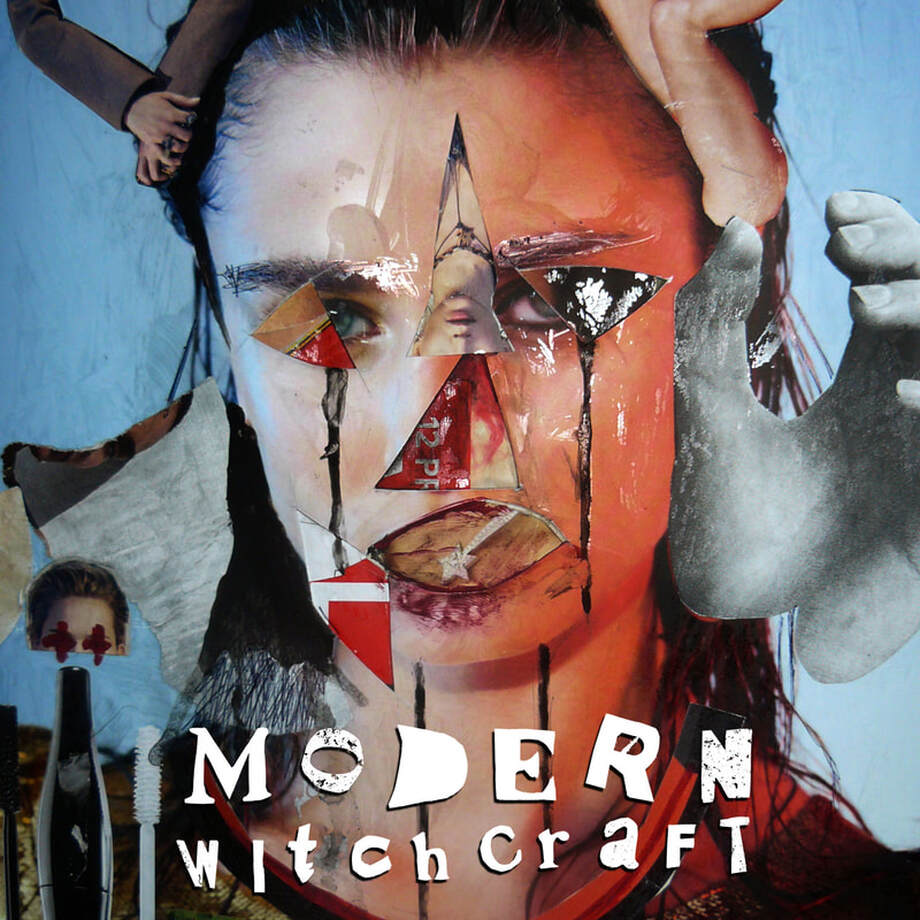 SEX CELLS formed in South London in 2016, bringing together Matt’s background in the visual arts and anti-folk / punk roots, with Willow’s passion for feminist literature and experimental electronics. Through their DIY videos and visceral live performances, the pair have built a presence which a recent fan review referred to as “helping define the anxiety and utter dread of late-stage Capitalism”. 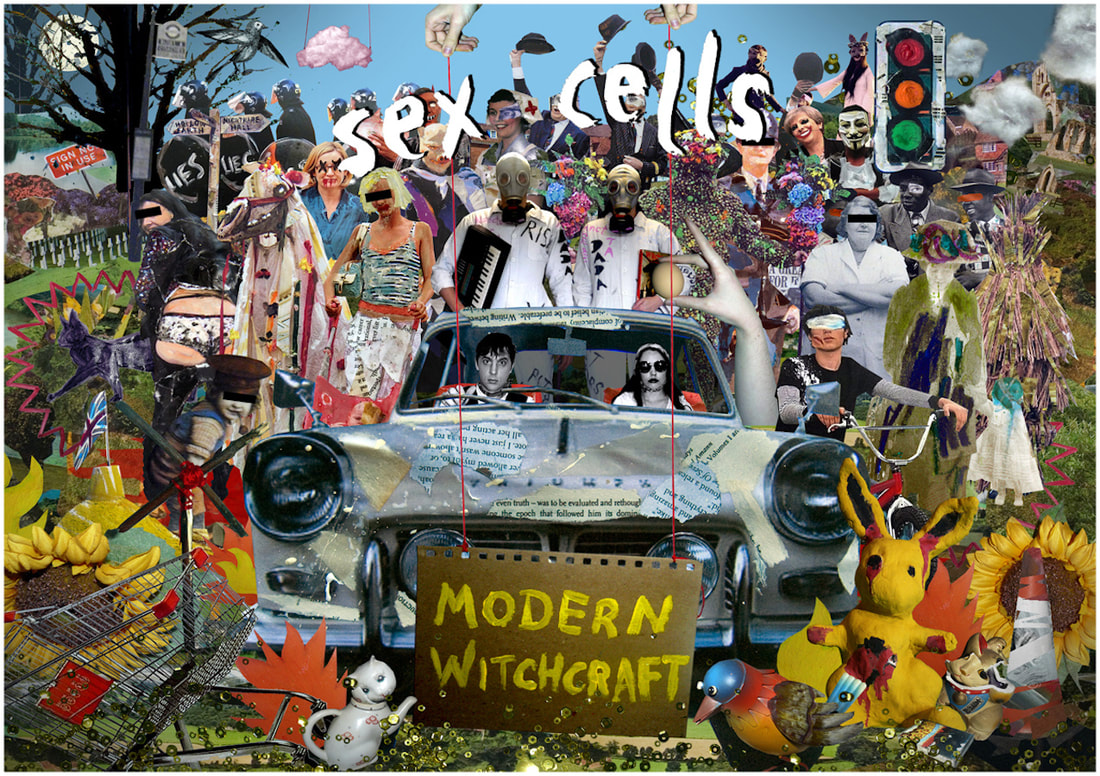 Matt: It’s never been a major influence for me as a listener, but I’ve grown to love synthesisers. Something about a cold machine being mishandled by a flawed human is attractive.

Willow: Yeah, it’s not necessarily a sonic influence, even though we do use synths and drum machines! However, one thing that does inspire us about the eighties is the fact it was the era of the great political pop song - stuff like ‘Let’s All Make a Bomb’ and ‘Two Tribes’. We’re really into the idea of taking quite brutal, frightening themes and setting them against a backdrop of bass hooks and traditional dance beats - the image of having a massive party at the end of the world. After all, to quote Super Hans, a synth is the best instrument for creating a powerful sense of dread!

Do you find it easy working with a producer you can’t be too precious with your song?

Matt: I suppose every moment has the potential to be precious, but moments are fleeting, so being precious in the sense that you hold tight to an idea… that can suffocate the present tense. Keeping things in motion is important, and that requires letting go, allowing music to be part of the moment.

Willow: Some things are supposed to be left the way they are, for example, a really special bedroom recording that captures a specific, pivotal moment in time. But if you’re going to get in the studio and work with a producer, surely the most exciting thing about that is the prospect of invention and collaboration.

Matt: Sophie Denis was my first love, but she didn’t reciprocate.

Do you share your creativity with other genres- writing- painting etc

Matt: I suppose because we work so closely together, it’s like building your own world, so alongside the music, you need the books, you need the painting on the wall, and of course you need a good movie! It’s all forms of communication, and it’s healthy for us to be exploring the themes and responding to the vibe of the music, creating something that is connected but also could be considered standalone. It all combines in one way or another, but ultimately all roads lead to music.

Willow: Yeah, our artistic pursuits are very much connected to our music, from writing to visual media. Comes in handy when you have to make your own music videos!

Willow: Of course, there’s always something going on in London. It’s really inspiring seeing so many people starting up their own creative communities, particularly in a city that can feel quite disheartening at times, like a huge antibody trying to push us out. We’re lucky that we do still have a few thriving, independent venues with promoters who are willing to take a punt on the new and unknown, although they need protecting!

Is the music industry changing and if so who’s benefiting?

Matt: Er … over all, no I don’t think so. The same old boys are holding tight to the reigns and they’ve still got the monopoly. That said, there’s a healthy underground of bands, labels, promoters, writers, etc appearing at the moment. There’s definitely a ‘thing’ in motion. As for who benefits, I’m not sure anyone’s supposed to benefit outside of the music being enjoyed, and for that you just need to support those who are giving the bands a platform, like the promoters, venues, zines etc. Of course, the bigger picture remains, life’s algorithm is set to favour the bland and / or better connected, which is frustrating across all of life, from British politics to the art world. For the authentic scumbag, it’s about the communal experience.

Are you comfortable playing live?

Matt: I’m never comfortable playing live, it’s a ridiculous thing to do on paper, putting yourself on show in front of a room full of strangers. But, there’s a compulsion involved, and that mix of anxiety coupled with misplaced want makes putting yourself in such a vulnerable position incredibly potent. When the room disappears, and everything feels magnetic and almost weightless, that’s the moment it makes sense!

Willow: Live performance is definitely one of the most important aspects of making music, for me. It’s where all the learning happens, and where experiments get the chance to sink or swim. I wouldn’t say it’s comfortable per se, but there’s almost something inevitable about it, like giving in to a primitive, pre-cognitive instinct.

What’s next for the band?

Willow: Music. Sex. Art.
Matt: Loads of gigs and our next single drops in July!