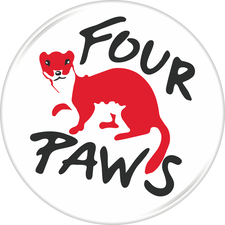 In January one of my favourite charities lost a very special person.
Please consider a donation to this amazing cause.
Click logo for details & thank you Four Paws.
​ Best pp
It is with great sadness that the global animal welfare organisation FOUR PAWS announces the death of Founder and President Heli Dungler, who died suddenly and unexpectedly in January 2020, at the age of 56. Heli Dungler has decisively shaped animal welfare over the past 30 years and expanded FOUR PAWS into a global organization.
“His death is a severe blow for us and fills us with great pain. Our thoughts and our deepest sympathies are with his wife, his daughter and all his relatives during these difficult hours” says Josef Pfabigan, board member of FOUR PAWS and long-time friend and colleague of Heli Dungler.

"Through his passion and tireless efforts, FOUR PAWS was able to save the lives of many thousands of animals," : Josef Pfabigan.

Heli Dungler was born in 1963 in Waidhofen an der Thaya in Lower Austria. In 1984, he started his career with Greenpeace, Austria. During this time, he nurtured a desire to actively promote animal welfare. In 1988, he founded the animal welfare organisation FOUR PAWS in Vienna and initially focused on animal protection issues such as fur farming, battery farms and circus animals. For decades, through negotiations with decision-makers around the world, he campaigned for higher animal welfare standards in agriculture, for legislative changes in the keeping of brown bears and for the protection of big cats and stray animals. Thanks to his tireless work, today FOUR PAWS is a global animal welfare organisation, represented in 15 countries and revealing suffering, rescuing animals in need and protecting them worldwide.
"Through his passion and tireless efforts, FOUR PAWS was able to save the lives of many thousands of animals," says Josef Pfabigan. "The world has lost a very special animal lover and visionary. The employees of FOUR PAWS, his relatives and friends mourn the loss of a very special, charismatic and humorous person. We will honour his memory by continuing the work he loved so much."​
share
​
google.com, pub-1336815800049544, DIRECT, f08c47fec0942fa0