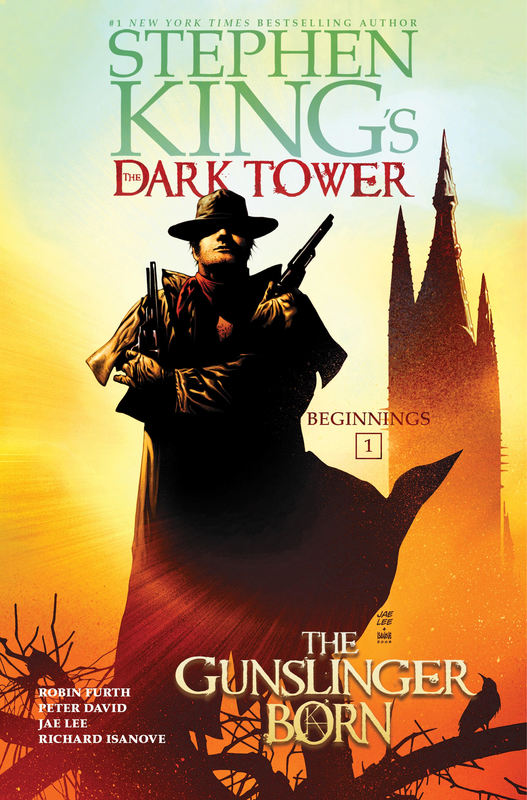 A man in black fled across the desert, and the gunslinger followed.” With these unforgettable words, millions of readers were introduced to Stephen King’s iconic character Roland Deschain of Gilead. Roland is the last of his kind, a “gunslinger” charged with protecting whatever goodness and light remains in his world—a world that “moved on,” as they say. In this desolate reality—a dangerous land filled with ancient technology and deadly magic, and yet one that mirrors our own in frightening ways—Roland is on a spellbinding and soul-shattering quest to locate and somehow save the mystical nexus of all worlds, all universes: the Dark Tower.

Now, in the graphic novel series Stephen King's The Dark Tower: Beginnings, originally published by Marvel Comics in single-issue form and creatively overseen by Stephen King himself, the full story of Roland's troubled past and coming-of-age is revealed. Sumptuously drawn by Jae Lee and Richard Isanove, plotted by longtime Stephen King expert Robin Furth, and scripted by New York Timesbestselling author Peter David, Beginnings is an extraordinary and terrifying journey into Roland’s origins—ultimately serving as the perfect introduction for new readers to Stephen King’s modern literary classic The Dark Tower, while giving longtime fans thrilling adventures merely hinted at in his blockbuster novels.

Bringing the dramatic history of Roland into chronological order—as originally published in the novels The Gunslinger and Wizard and Glass--The Gunslinger Bornbegins with a reckless act of courage that gains Roland his first set of guns and earns him and his friends, Cuthbert Allgood and Alain Johns, a special mission to the town of Hambry...not only for their personal safety but on behalf of the Affiliation—an alliance resisting the ruinous advance of “the Good Man,” a monster named John Farson. But the expedition will quickly become Roland’s first experience of the evil forces that he will encounter again and again throughout his life, and in a myriad of guises. And he will also discover the overwhelming power and pain of true love, through which, more than anything, he will learn beyond a shadow of a doubt what things are worth killing for.
google.com, pub-1336815800049544, DIRECT, f08c47fec0942fa0