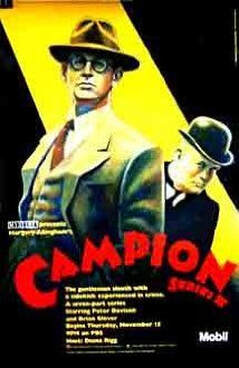 ​I’ve read around 5 or 6 Margery Allingham novels. At the same time, I’ve started another 4 or 5 books, not finishing them, usually for the same 2 reasons .

2/ The absence of Lugg, Campions ‘Man’, evident to the point, where I stop reading the adventure, choose another adventure, where he: (Lugg) takes a prominent part in the story from the off!

'Campion' and 'Lugg', are two of my favourite literary characters. Created by Margery Allingham in the late 20’s, some would say her reply to ‘Lord Peter Wimsey’, the dashing amateur slooth created by Dorothy L Sayers; portrayed very well by Ian Carmicheal, in a series of excelent radio dramas.
'Peter Wimsey' is a Lord in Sayers books. Margery Allingham constantly hints to 'Campion' being far, far closer to the Crown than that...?

Back to the point, because, because Margery Allingham created these two of my favourite literary characters, I forgive her for writing in a style I often find difficult to follow.

This might be my fault, l have always had difficulties with words, in particular spelling, grammar, the writing and reading of.
I’m left handed, when I was very young, I started writing my name from right to left : ‘luaq’  -  I’ve used a  q to replace the p  ….for dramatic Effect! Affect!

At my first school, infants. Teachers very often took the pen out of my left hand, putting it into my right hand, tightening my right hand fingers around for emphasis. I remember the pen...
The pen was grey, it was shaped like an ink pen, but it was a ball point pretending to be an ink pen?

Hopefully, this goes someway to explain why I sometimes abandon a Margery Allingham (Campion) novel.

When it’s good though, when Margery is on a level I can grasp, I’m completely entranced/engrossed in the story.

In her first Campion novel, Campion was almost a bit part character. I kept reading, and reading, seeing his character grow and grow,  until ... well read ‘The Crime at Black Dudley’ ( 1929 - the first Campion Adventure ) for yourselves.

The above paragraph contradicts the second reason I stated for not finishing a Margery Allingham 'Campion' novel. Because Lugg was absent in ‘The Crime at Black Dudley’, a book I most certainly finished, again.

I was aware of 'Lugg', as a character before I read ’The Crime at Black Dudley’, thanks to the ‘Campion' TV series.

'Lugg' was played by Brian Glover, 'Campion' by Peter Davidson.
I don’t want to judge the  portrayal of the Allingham characters by Glover and Davidson, because TV, is well, TV.
Out of the two actors however, I’d suggest Brian Glover got closest to the  Allingham characters. In truth, both actors had little chance of giving real depth to these incredible deep literary characters, often the case.
For the record, I always thought the actor ‘Lesley Howard’, fitted my screen image of the modest aloof hero, Campion to a T
​
Back to 'Lugg', what do I love about Lugg? I love his loyalty, his honesty, his criminal past, his connections, he would never suck up to Campion; he would always tell it straight!
Very opposite to Lord Peter Wimsey’s man, who is relatively rendered insignificant, relegated to the past, having saved Lord Peter Wimsey's life, in the Great War of 1914 - 18 he is given employment.
​I would've  loved Dorothy Sayers to have given ‘Bunter’ more freedom as a character, using the loyalty he showed saving Wimsey's life she could have created a 'Bunter'! Who I might be writing in praise of now.
I suspect Margery Allingham felt the same way. She gave 'Lugg' soul, freedom, his own personality, free from the class constraints still adopted by Dorothy L Sayers.

'Lugg' is a large, bald man, a former criminal who reformed after he "lost his figure". In Police at the Funeral, he has recently grown a very large white moustache, which he also sports in Sweet Danger.
Lugg, in The Fashion in Shrouds, is the originator of the curious sentence, "It's crackers to slip a rozzer the dropsy in snide".[2]This sentence frequently appeared in Mad magazine and has achieved some notoriety as an Internet meme. Unfortunately, it is seldom attributed to either Lugg or Allingham. The sentence contains English slang and means, "It's madness (crackers) to slip a policeman (rozzer) a packet of money (the dropsy) in worthless money (snide)" or "it's madness to try to bribe a policeman with counterfeit money".
Explaining why Lugg never seemed to age over the series of books, Allingham herself suggested that, like the detective's horn rims, Lugg was “part of Mr Campion's personal accoutrements...Lugg is his sense of humour, and is disliked by some of his best friends”[3] as a result. The pair have also been seen as a classic comic act,[4] the one hypermanic, the other the lugubrious foil for Campion's wit.[5]  P. D. James however considered the character too close to the traditional stage cockney for full effect.[6]
In fact, Lugg's character is more subtle and nuanced than that. Mr Campion himself displays the indifference to social standing which betokens those who have been born to it; like the legendary "true aristocrat" which it is constantly hinted that he is, he associates freely and without embarrassment with all classes of people. Lugg, in order to prick this cosmopolitan insouciance, affects—when it suits him—a comic aspiration to "better himself" and to lift both himself and Campion "out of the gutter," an aspiration constantly frustrated by Campion's insistence on mixing himself up with crime. In this way he often succeeds in shaming, or at least embarrassing, Campion, and thus the status dynamic between the two men is made far more interesting and attractive than the traditional master-servant relationship as typified by Lord Peter Wimsey and his man Bunter.
Lugg's first name has been linked to the unfortunate British defeat in the Battle of Magersfontein during the  Boer War.[7]
​
share
​
google.com, pub-1336815800049544, DIRECT, f08c47fec0942fa0