After the release of Eurabia Vol. 1 Cairo Liberation Front are back with a new volume of their Eurabia series, featuring their new vocalist Bagdaddy. Eurabia Vol. 2 introduces a unique collaborative approach to modern-day Middle-Eastern electronic dance music.
Cairo Liberation Front (CLF) was started by Yannick Verhoeven and Joep Schmitz; two geeky, somewhat naïve Dutch devotees of Egyptian electro-cha3bi. This highly infectious music –originated in Cairo – prompted the duo to assemble tracks and create mixtapes. The goal: to promote electro-cha3bi to the rest of the world. CLF’s mixtapes rapidly gained recognition from international media such as The New York Times and The Guardian. As it turns out, their love for electro-cha3bi was just the root of their own musical journey. The duo became inspired to compose and create music, which first resulted in Nymphaea Caerulea (Höga Nord Rekords, 2017) where they joined forces with US based psych producer Al Lover.
Besides the effort in the studio their live shows caught on quickly as well, with electrifying sets at festivals such as Amsterdam Dance Event (NL), Best Kept Secret (NL), Dour (BE), Pukkelpop (BE), Fusion (DE) and Plisskën (GR). In addition to follow their giddy quest to spread cutting-edge Middle-Eastern sounds, CLF initiated Eurabia; a self-curated club night inviting groundbreaking artists like Rizan Said, Islam Chipsy, Maurice Louca and Acid Arab. While Eurabia originally came from a dystopian theory, which believes the Arabic culture is here to takeover the Western society, CLF is positively embracing the emerging of different cultures. 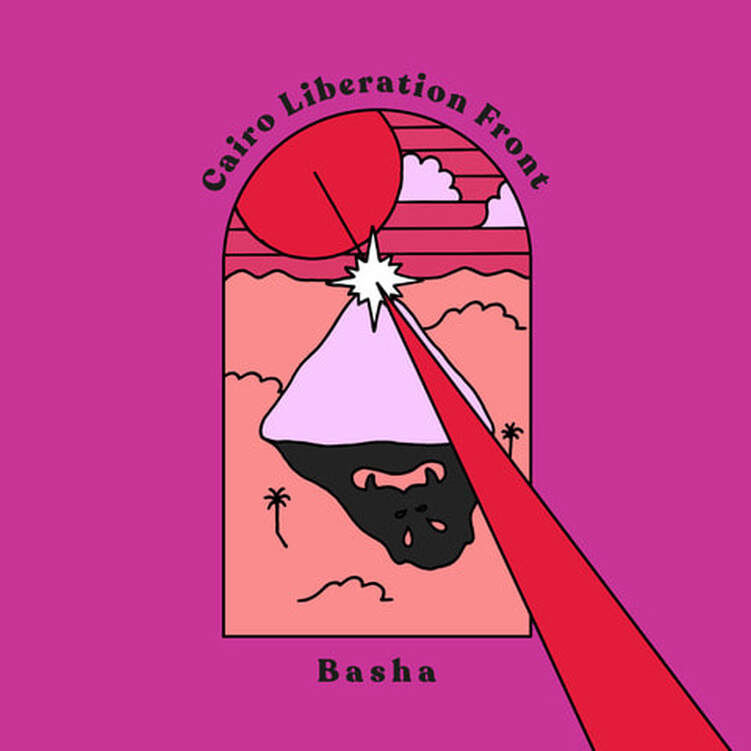 Artwork Link - residentadvisor.net/dj/Cairo Liberation Front
​On Eurabia vol. 1 (Byrd Out, 2018) Cairo Liberation Front introduced the world to vocalist Bagdaddy, who led the charge for tracks Tilly and Atash. This fiery punk, born in Iraqi and raised in the Netherlands, never sang in her native language before. These songs gave her incentive and space to express her own personal experiences and emotions. This collaboration let them to team up more frequently, in the studio as well on stage. Bagdaddy’s attitude connected to the values and believes of the collective’s DIY-ethos, so joining CLF felt obvious. Becoming a three-piece group led to a new chapter of CLF’s journey. During the live shows new ideas arose, which resulted in Eurabia vol. 2. On this new record CLF experiments with new sounds, while not forgetting where they came from. For instance on leading single Basha, a track which reminds of UK dance acts such as The Prodigy and Basement Jaxx, while the unheard-of vocals of Bagdaddy ensured a unique approach to electronic Arabic dance music.
Though its sample size is small, Eurabia Vol. 2 offers a sprawling glimpse in CLF as an original, freethinking and tirelessly exuberant musical collective. It is built equal parts on collaboration and friendship, as well as exploring the endless possibilities of forging together mentalities that could not be further apart in their execution, dovetailing everything into open-minded but well—honed production values.

Sounds like you’ve had quite a journey can I take you back to your early youth, Influences/ first steps towards where you are now?

So we used to listen to a lot of punk music when we were younger. As our mc Joep for instance is a a stoner-doom drummer and our dj Yannick a bass player. During an internship at the Incubate Festival, a weeklong multidisciplinary festival in own hometown Tilburg, we met and discovered electro-cha3bi; an fascinating music genre from the popular neighbourhoods of Cairo which made us decide to rid of our instruments and starting dj-ing so more people should be aware of this amazing music. After creating lots of mixtapes and touring we decided to produce Arabic-inspired music our selves, causing us picking up those instruments again. During that time we met with our current vocalist Bagdaddy and started recording together. As Bagdaddy also got a background in punk and hardcore music we connected really well, both in the studio, as on stage From that moment for us it was more than obvious to proceed as three-piece.

Were you a studio project at first?
.
No actually the other way around; we started playing Arabic music around the clubs and festival as we found out that extreme right wing parties gained popularity and lots of people had a disturbed image of the Arabic culture. We’re trying to share a more positive side of this culture by playing this kind of music. Us producing tracks became a bit later in this process.

Can playing live give songs a different feel / life?

Well yeah, it definitely can. First of all for us these live shows are for us a great way to experiment with new ideas and to try out new songs. From these audience responses we notice how we can craft these tracks in the best possible way. At the same time it’s really weird to see if we perform a song from our previous record called Atash for example. It handles about Bagdaddy’s plan to stop drinking, playing this for a wild festival audience who mostly all are drinking or did something extras to entertain their night.

Wouldn’t call it difficult, as it all resulted in a more natural way, as we the three of us all listening to lots of different genres and music from the Middle East is something we all got in common. So with those influences we just started playing ideas back and fort; sometimes based by a hook Bagdaddy wrote, sometimes a heavy 808 bassline made by Yannick or a darbuka pattern by Joep. With the three of us we trying to shape these ideas in an actually song and trying out live on stage. With Bagdaddy we actually were really interested how she would sound if she would sing in her own native language, as she previously never did this before. Sometimes she explains what the lyrics are about, sometimes not which is all fine by everyone in the group. It also ensured the pronunciation of Joep and Yannick of the Arabic language is getting better and better ever since Bagdaddy joined the band.

Did you encounter any difficulties from section of Arabic society when ‘embracing different cultures’ is it still a fight - is it a fight?

That’s an interesting one. We get critics from different kind of angles; first of all from a more left wing prospective that has critics about two Dutch white guys that shouldn’t make Arabic music. As we’re also making party music it seems like people think it’s just as joke to us, but the truth is we’re dead serious about what we do and well considered about every step we take. At the same time from the extreme right wing angle we’re not getting a lot of encouragement, as they don’t understand why we think it’s important to play Arabic music in this day and age.

On the other hand we noticed Bagdaddy is getting some critics from the Arabic society. Not cause she’s embracing the ‘west’ but cause she’s a girl and is not afraid to speak up. In more conservative Arabic society that’s a no go, especially because her gender. And that’s actually why we think it’s relevant to give a vocalist like Bagdaddy a platform and to make sure she can say whatever the fuck she wants.

In our experiences everyone has a different opinion as for example the Arabic society is not based of one opinion, but all based from different individuals, with all different opinions. Some are of a more conservative nature that believes Bagdaddy shouldn’t be on stage and a girl shouldn’t crowdsurf. Some Arabs are more progressive and thanking us after a show as they think this fusion between Arabic and Western music is something they have never heard before. For us, as music lovers, it’s all about pushing sonic boundaries and creating something, which hasn’t been made before. For our previous EP for example we asked the Syrian keyboard legend Rizan Said to play at one of our tracks called Manuwar, where we took inspiration from Dutch gabber and early rave music. In our opinion this something we like to do, as we ourselves haven’t heard an avant-garde dabke keyboard solos on top of Thunderdome inspired 909s.


Does your music cross paths with any other artistic genre- any writers/painters ...?

Yeah it’s growing and growing actually. Especially when we started hosting our own club nights called Eurabia, we started working with artists from other disciplines, for instance with Sjors Driessen (Topsy Turvy Magic). He’s a brilliant illustrator who we have a long lasting collaboration with as he’s doing a marvellous job doing illustrations for posters, but also currently on our artwork and merchandise. Also with Narges Mohammadi, aka Fatima Ferrari, a visual artist from The Hague we often work together. She made several custom items for the decoration of our Eurabia nights. As well by visual artist Myriam Gras, a friend of us from Tilburg. In all those scenarios we found out it’s really important to work with other (visual) artists who are like-minded and understand what you’re doing and why.

Well, during Amsterdam Dance Event we’re hosting a new edition of Eurabia. This time we’ve invited DJ Dziri from Brussels, SiiN from Berlin and the Dutch-based LazerGazer & Fatima Ferrari. For us it’s going to be a special night as we’re releasing our new record Eurabia Vol. 2. And after that release we are going back to the studio for our plans of the third volume, which might complete the trilogy.