​James Baxter is very busy. Very talented AND very busy, should I say. His new E.P. is set for imminent release, and his latest single 'Soap and Water' is out now, so do yourselves a big favour.....
​I managed to catch up with him and ask a few questions...
Where are you on the 'being disciplined with your self' scale, James? Near the top or the bottom?
​
I am right at the bottom. I don't even like saying the word discipline, it hurts.

Can you remember the song that made you want to sing? Hard question maybe, but mine was Rocket Man or Your Song or ... it’s a hard question....

​I wouldn't say it was a specific song, but Nick Drake's album 'Five Leaves Left' was the catalyst for me. It gave me the courage to put my music out and helped me discover my own identity with which to present it.
Maybe connected... or not... Did you listen, or not listen, to mum & dad's vinyl? (I hope they had vinyl...)

Haha! I did and still do listen to my parents' vinyl!
Highlights are 'Mudslide Slim', by James Taylor and 'The white album'. Shit changed my life, haha!
I stole all my parents records and they live in my living room now.

I’ve had a mixed message about music at school. Jack Tyson Charles said he loved the encouragement from his music department and Michael Kilbey mentioned it as well.
You're so accomplished - your voice in particular, for me. Where did that start?

I never could get on with formal lessons. I bailed on clarinet lessons, bailed on drum lessons and never bothered with any others. I'd rather develop my own identity and if that takes me longer through trial and error, or means that I'm not able to do certain techniques, I'm weirdly happy with it. I know a lot of musicians would probably be tearing their hair out at the thought of this, but that's how I like it. Vocals is the one thing I wish I'd had some training on, but again, I've developed my own methods and techniques that are probably totally fucking wrong, but fuck it. I like it. I'm comfortable with it - and thanks for the compliment! 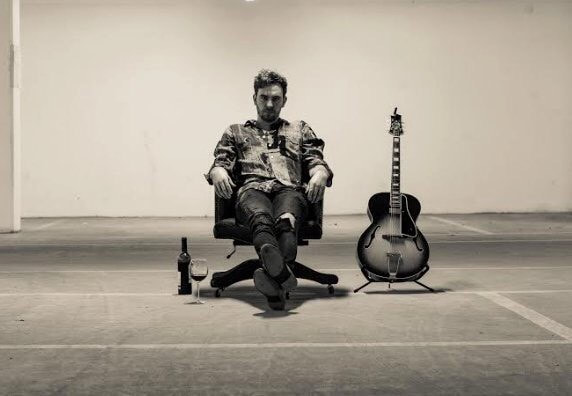 So was it always music, James?
Your love.. could you ever see yourself doing something else?
I ask because more and more creativity seems to be crossing over. I suppose it’s always been there. John Lennon’s writing & wit has been published. Ronnie Wood’s paintings are gaining more and more respect in the art world. Peter Doherty is well known for his paintings, as well as poetry and of course, his songs.
What I’m trying to say, is :
Do you have a novel, or a landscape in you?

​I actually studied art at college as a foundation degree and I really enjoyed it. I'm not a massively talented painter, but I love the freedom of expression that art offers. I remember my final piece for my pre-degree, was about self-fulfilling prophecy and the power of suggestion. A load of half completed canvases and an invitation to the viewer to complete them. I predicted how it was going to go and tried to influence the outcome.
In reality I think it's just because I'm fucking bone idle and I couldn't be arsed to finish my own work, but my tutors loved it! That was art. I ended up with the second highest grade of the graduating class!  I could have had the highest if I ever showed up to classes! I was an ass.

Finally James, I think your talent stands out a mile - but It must be difficult in the ever changing music business?

Appreciate the compliments - you're making me blush.
I am currently about to release a new EP and I'm really excited about the next year. I just announced an Irish tour, plus I have a whole host of summer dates to announce over the coming weeks. People are slowly starting to take notice and i have great support from the local scene, my management and local press, which is just awesome. The way people listened to music went downhill for a while, but I think we're seeing a resurgence of the LP and more attentive crowds at shows, which goes to show the way people are digesting music is changing for the better. If Spotify could just sort out its royalty scheme to give back to the artists more fairly, we'd be in a better place, but beggars can't be choosers!

Whats coming up next, James?

The next shows are: 5th May at The Loft in Southampton, co-headlining with my label buddies, The Dead Freights; then 22nd May at The Water Rats in London with Naked Elephant, - both really hot bands right now, doing some really interesting stuff. 2018 and 2019 are going to be very exciting and hopefully big things are on the horizon.
I truly feel that we are heading into a golden age of British music, James, and you're right in the middle. Thanks for the chat - (don't forget my Water Rats Guest in X) pauliepaul x
google.com, pub-1336815800049544, DIRECT, f08c47fec0942fa0