"Yes it chose itself and that’s what’s so brilliant about the synchronicity of five people working together and all agreeing that this is the song that excites them the most." 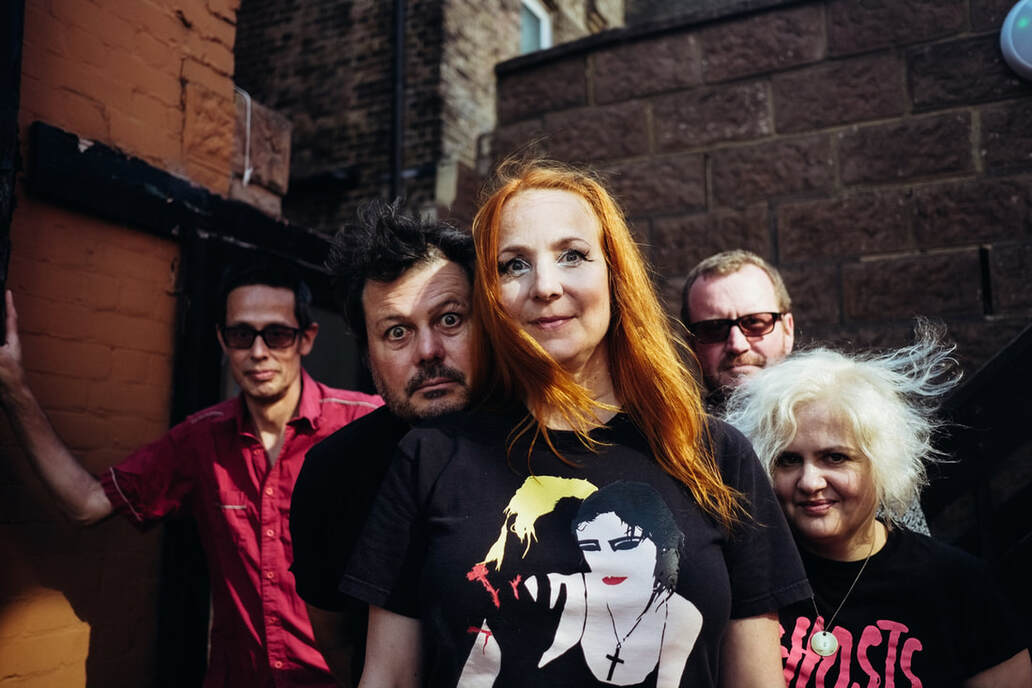 Salad.com - pic link
​
​Hi Marijne, nice to talk to you - firstly
Can I ask you about playing live? I know you’ve already done a few gigs - the Scala, for example…

Yes we did The Scala and played with Echobelly. That was a lot of fun! It was the first time as a full band we’d played and shared an audience. As Salad Undressed, which was just Paul and I, we’d done the Starshaped tour just previous to that, so it was nice to get the whole band together and play again.
Was playing live easy to get back into?
No, it wasn’t actually! (Laughing) It’s funny, because prior to the gig on the 27th September at The Lexington, we had rehearsed for months just to get the vibe back and my brother came to that gig and he said ‘Wow! You only rehearsed for a week and you sounded amazing!’ Well, I daren’t tell him….months of just gelling and finding our feet again.
It sounded pretty good to us straight away, but we knew that wasn’t good enough for the audience. The muscle memory is there, with songs like ‘Drink the Elixir’ and yeah, it was scary playing live again, but I think our fans were very kind to us.
You’ve got another gig at The 100 club coming up, haven’t you? Indie Daze?
Yes, we’re playing with The Bluetones on the 3rd October at The 100 club. Our first real official gig with Salad reformed was at last year’s Indie Daze at The Forum. It was very exciting and lots of people came to see us. The 100 club is a great venue, great sound, well it’s legendary. This time round they have changed the format slightly, which I quite like, you can really focus on 2 bands each night.
The Salad undressed album is out now isn’t it, how's the new Salad album coming along?

Yes, we’re working towards March/April next year. We’ve already recorded the first single and we’re now at the mixing stage. it’s called ‘The Selfishness of Love’ and we didn’t think we’d be recording this song because we had a pot of songs to choose from for the first single, but then Charley just said ‘Why aren’t we recording The Selfishness of Love? It’s really good!’ And we all thought yes, we’d kind of forgotten about that one! Then the song just took over, it had a life of its own and now it really is the standout track/first single of the Salad comeback album.
How exciting!
It’s really exciting it wasn’t even our choice!
​So the single chose itself!
Yes it chose itself and that’s what’s so brilliant about the synchronicity of five people working together and all agreeing that this is the song that excites them the most.

“You bite the hand that feeds, you gotta lotta needs… and when you’re feeling blue, want me to feel it too” :  'selfishness of love'

​I’ve heard many stories about bands – that getting on together is as important, if not more important than being able to play together?

Yes it can be very, very difficult. I was in a band in between, about 9 years ago, called Cowboy Racer, just two of us, which worked in terms of, he did the music and I did the words and the melodies, but we had differences of opinion about artwork ideas, how to promote ourselves, how to play live… and in the end, unfortunately, he listened to some other people who were close to him, who said ​‘We don’t get this, why are you doing this?’ and eventually we split. We made a lovely album. I don’t know if you are aware of it, Cowboy Racer? It’s on Spotify and iTunes and is called ‘Love Stationary’
I’ve not listened to it but I’m aware of it. It’s on my list of things to listen to!
Well anyway, back when Salad were touring in the 90s, we often said how great it would be if we could bottle what we had as four people – and then as five people… if only we could have bottled that, then we would have been really successful! The jokes, the camaraderie… it was really special. I missed it enormously once it was over, we were like a family. I have my own family, but they’re my second family.
Do you look back on your first album, ‘Drink Me’ with fondness? I’ve tried to listen to it on Apple Music but I couldn’t find it.

It’s not on any streaming services because our record company haven’t put it on. It’s one of the things we need to sort out. I’ve tried to contact the people at the record company about this but they’re all new so it’s tricky. I do look back at that album fondly, because it was the first time we were put in a studio with a producer. We were in Pink Floyd’s studio in Islington and we were being paid and we thought ‘Yeah, we’ve arrived!’ Our producer was the producer of The Breeders’ album, the one with Cannonball on it, so we thought it would all be perfect for us. It was troublesome in the end, and difficult to record. I remember sitting on the roof of the studio, crying my eyes out, thinking ‘I don’t know what I’m doing, this is all brand new for me and I’m not sure I’m up to it’. We had to dig deep. The producer and I didn’t always see eye to eye, he didn’t always understand our process,  but it became the album of the summer in 1995 for many people and was in the top twenty! I love that people are still going on about it. We had the idea that we might do a small ‘Drink Me’ gig, but we’re putting that on the back burner for now because we do want to move forward. We are not a nostalgia act. It definitely helped an awful lot going on tour with Sleeper and The Bluetones with the Starshaped thing. What a beautiful reunion of bands that pretended to hate each other! [Laughs]
Yes I’ve heard you speak about that so-called rivalry that wasn’t really there!
​It was made up by the press and so we all thought everyone hated each other so nobody spoke to each other which is why it is wonderful to see that we’re all on the same page, just enjoying what we do and meeting like-minded people who have been through similar experiences. We’ve all done the band, done the family, done the job etc. and have come back to music for the right reasons.
Can I ask you a bit more about Salad Undressed? Is that an acoustic project? Does it allow you to express another side to you? Or do you see it as another part of Salad?

Well, even though we started out live as an acoustic outfit, the album is fully instrumented, so yes, you’re right. Salad Undressed was a chance for us to fully express ourselves without anyone looking over our shoulder and that’s how so many bands are doing it now, they’re doing their own thing. In the past twenty years, the producer of our last album ‘Ice Cream’, Donald Ross Skinner, and Paul Kennedy had been writing TONS of songs together. They didn’t know what to do with them. They had recorded them so we also dipped into those songs and the result is a very colourful, melodic but chancing-it Salad sound. We did exactly what we wanted to do, what felt right, and I think people smelt it!
That certainly comes across - I was listening to some of those this morning and your voice still sounds great!
​Thank you Paulie Paul!
Does your art transfer through to other genres? I know of other musicians who create other art forms like poetry or painting…
I’m glad you asked. Art is my life, being creative and being able to express myself creatively is my life, whatever genres or mediums that may be at the time. Music is the one I feel the most comfortable with and that’s why I’m SO happy to be back at it. Everything else in life (including motherhood!) has been a fair effort, but music….. It’s like I’m MEANT to be doing it and I know that everyone in the band feels the same. I’ve made leather handbags and printed my own leather, I’m an editor, and I’ve edited trailers for programmes and done voice over work, but I also have a side of my brain that really love numbers. Numbers make me feel really safe so I enjoy doing my own accounts! But there have been times when I’ve found myself feeling really low, realising it's because I’ve not been able to express myself creatively so, inspired by a quote from Kurt Vonnegut, I make sure I express myself creatively every day, even if it is singing I the shower, or writing a shitty poem, it doesn’t matter because it’s a lifeline for so many people.
Thank you so much Marijne, I might see you at Rita and Michelle's book launch but I'll look forward to your headline gig at the O2 in Islington!
pauliepaul
PS/ Also worth mentioning that along with the new Salad album (first one since 1997), we are also releasing a second Lost album. Called, you guessed it, The Lost Album Vol. 2.
These are tracks recorded as demos for the 3rd Salad album which we never got to released in the late 90s. Vol. 1 went down very well with the fans (released Nov 2017), and the collectors amongst them can't what to get their hands on these last lot of tracks written and recorded in the 90s, (20 tracks or so) but are only seeing the light of day now.  It will be like a bonus album that will be be sold alongside the brand new Salad album, working title ‘The Salad Way’ of which we are releasing our first single in 21 years, 'The Selfishness of Love’ of which I already mentioned.
​
share
google.com, pub-1336815800049544, DIRECT, f08c47fec0942fa0