There's no way any of us can travel to North Wales, but luckily Anni Hogan has transcribed the pastoral beauty in her piano pieces. Honeysuckle Burials captures the romantic Welsh atmosphere in all of it's lyrical beauty, painting and melody. Hogan, reflective for a Wales she can only translate through song, is also reflective of the many artists she worked with in the eighties. She discusses her many guises with Eoghan Lyng.

I love your new album...

Oh great! I was wondering what you'd say; "Oh, I hate your album". Ha ha. It's great that you like it!

Honeysuckle Burials, a series of lyrical piano paintings, is an excellent release. How long did it take to record?

Not long, actually. Maybe a couple of months. I went to North Wales, where the natural setting helped the recordings. Walking along the Clwyds , you can see Roman hillforts & Neolithic burial mounds. If you're a nature person, it can make you tick.

The Welsh countryside has served as Robert Plant's muse.

Oh yeah! I mean, where I was in Wales it was very green. Walking far enough along the Clwydian range, you can see their awe inspiring spinal column. There weren't many people, might have met two. This was back in July. So, did a bit of recording and finished it when I got back. Without being too up anywhere [chuckles], I tend to be profoundly visual when I'm writing. There was a vibe and I immersed. 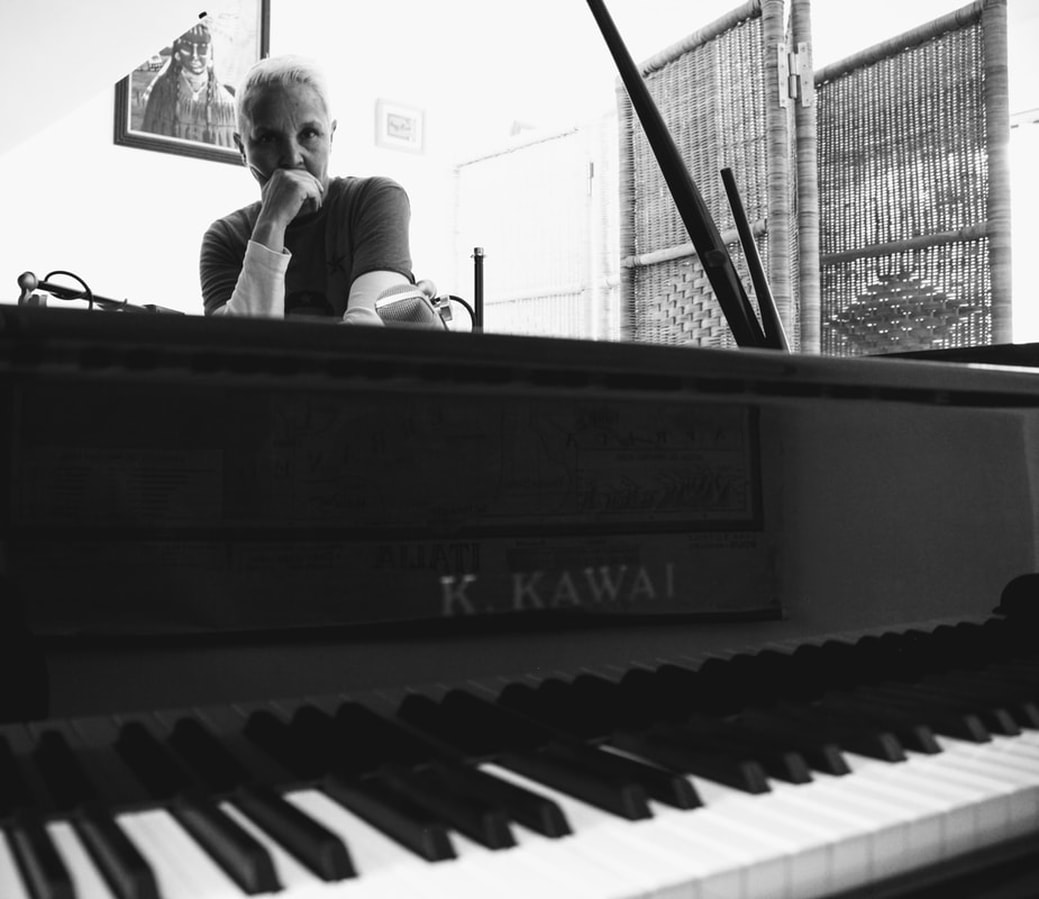 "We were both in the Mambas. The original lineup of Marc and The Mambas was basically, Matt (Johnson), Marc (Almond) and me."

​The songs are longer than those normally heard on the radio. Was that your goal to write long songs?

I tend to write in a repetitive, improvised way. I sit and improvise. I tend to pick at it. I set up and almost meditate a bit; I meander. There's two ways: there's the way I know how to write ‘traditional’ songs structurally and then there's the opposite to that, the experimental raw way, which I imposed for Honeysuckle, I don't know if that's coming through, but I hope you get what I mean.

Am I right in saying you once collaborated with Matt Johnson?

We were both in the Mambas. The original lineup of Marc and The Mambas was basically, Matt, Marc and me. I owe a lot to Matt actually. He was a powerful motivator. I hate the term career, but he helped me on my "musical journey".  Matt introduced me to Simon Fisher Turner, who was making the Deux Filles album back in 1981, that was my first recording experience.  Matt was really influential. I still have my 7” copy of "Cold Spell Ahead" Matt gave to me, that song became "Uncertain Smile".
​
That first The The album is superb.

It's fantastic, isn't it? Are you talking about Soul Mining or Burning Blue Soul?

The album with "This Is The Day"..

Soul Mining. You should check out the other one too- it's really psychedelic!
​
You played percussion with The Style Council in the eighties?

Don’t put that on my tombstone! Hahaha No, I played vibraphone with them onstage. It's very unlike anything I've done. Paul asked me to play vibes with them. He saw me playing marimbas on The Tube with Marc Almond [the Paula Yates/Jools Holland music show]. So flattering to be asked.  I'm not sure I really fit in, I felt like a fish out of water. It was very much the lead bass player runs to the front of the stage for a slap-solo.

I guess Weller wanted to distance himself from The Jam's sartorial elegance.

You could say that! I don't want to be horrible about anyone. I did get to tour Italy and the U.K. with them. And it was packed out stadiums! Just not my scene.

Talking about experiences, what was the Gene Pitney duet like?

I was one of the producers on The Stars We Are. I remember him [Pitney] being very ‘Las Vegas’ or something,  very American showbiz.  I remember him ripping off his shirt in the vocal booth during his takes, he was very into it. He was very with it, unlike Nico. Nico was on the same album.

Still must have been a thrill to work with the chanteuse.

The Stars We Are is Marc Almond's most fondly remembered work. What do you think of the album?

I think it's a fantastic album.I still love the songs. I have recently been playing piano versions of many of the ones I wrote. I worked out "The Stars We Are" and I thought 'this is a great track'. And "Something's Gotten Hold Of My Heart" went to number one, I have a Gold Disc!
​You also worked with Budgie, the drummer now living in Cork..

Does he live in Cork? I thought he lived in Japan.

As a student, I met a drummer who had played on "Hong Kong Garden"..

That's not Budgie. That was the drummer before him[Kenny Morris]. I knew Siouxsie, Steve and Budgie from meeting where I was DJ'ing. I used to DJ at the Batcave in ‘82 / ‘83. We were good pals. Budgie played on my first record Kickabye. We were recording in the studio and he played some harmonica on the album. Great guy. The last I heard he's in Japan playing for that really famous singer. You'll know him when you hear the name. It's John Grant that’s it.
[Editor's note: Budgie played on John Grant's esoteric Grey Tickles, Black Pressure in 2015 and toured with him in 2018].

You worked with the indomitable Nick Cave in the eighties.

Same time as Budgie. This was in 1983 and I knew Nick and Anita Lane. Jessamy Calkin wrote all the lyrics except Nick wrote the words for our track ‘Vixo’  She's a feature editor with The Telegraph now. I remember the experience with Nick being very intense. Intense in a good way.

It would be remiss of me not to ask about my fellow countryman Gavin Friday.

He's such a lovely guy. I had met him briefly thirty years ago, but I got to know him properly for Soft Cell at the O2.  We worked together on “Angels of Romance” on my Lost In Blue LP which came out last year. He's such an amazing musician. The Virgin Prunes are the best band that has come out of Ireland!

But of course he's also works with that band! He's such a multi-talented man. I love Ireland [imitates Dublin voice] "My name's Hogan, I'm from Irish stock". I have had great times in Dublin. I met Wolfgang Flür there. It was for a DJ gig. I think the venue might have closed down.  I'm still friends with Wolfgang and he also is on my Lost In Blue LP along with Gavin..

As one of Britain's premier female DJ's, do you think the industry has become more gender progressive?

Back to Honeysuckle Burials, what you recommend about it to fans of your older work?

Well, it was written when I was in a good creative place. There's a lot of nature vibes in it.  If you're into that kind of thing, it's a nice place to tap into. Give it a listen; it was all made with love.