​Firstly, can you talk a little about your early years with the Navajo? And your background?

That’s a big question, which I talk about in great depth in the book. But, just briefly, I started my professional life as a young schoolteacher on the Navajo Reservation in 1971. When I first arrived, the children in the classroom did not speak to me and didn’t even look at me. Their eyes looked downward. After a week of getting nowhere with the 36 children in my classroom, I wanted to quit my job and go back home to New England. The reservation felt like a very strange and inhospitable place to me. My Navajo teacher’s aide, well versed in white culture as well as her own traditional Navajo culture, saw how frustrated I was and asked, “Would you like to learn about my people?” I discovered that they didn’t talk to me because they didn’t know how to speak English. They looked downward as a sign of respect. What my teacher’s aide taught me opened up a whole new world to me—a magical and enchanting world where miracles can happen. It wasn’t long before I fell madly in love with my students, their culture, and their land.

They say to truly understand a culture you have to learn the language which you did - how much did that help in being accepted, or were you already accepted?

From the time my teacher’s aide taught me my first few words in Navajo, the students welcomed me into their homes, their ceremonies, and into their hearts. They were so delighted that a white person was making so much effort to speak their language, they totally accepted me and treated me as one of their people. They invited me into their remote homes, into their ceremonies, and into their hearts. Because the students saw how much I cared about them and respected their culture, they learned English very fast. They wanted me to know all about their lives. I also threw away the curriculum, which was designed for white, middle class children and had no relevance in their lives. We created our own learning material based on their own lives on the Reservation. Eventually my classroom was chosen to be part of what was then a novel idea—bilingual and bicultural education for non English speaking citizens. We were interviewed by the BBC.

​I spent my early years in England. In fact, I was at the queen’s coronation in the front, in 1953. My father was a liaison between the English and the American government. We lived in Woking, outside of London. I spoke with a British accent because at Langsmeade, the school I went to, I was corrected constantly for talking like an American. I was in the first grade. When I returned to the States, I was teased constantly by my little classmates because of the funny way I spoke. Because my father moved around so much, I constantly had to learn new accents and new languages. That’s probably why I was able to learn Navajo, even though it’s considered the most difficult language in the world and was the only “code” that was never broken in WW II and it wasn’t even a code. It was simply the Navajo people’s own language. ----
​ 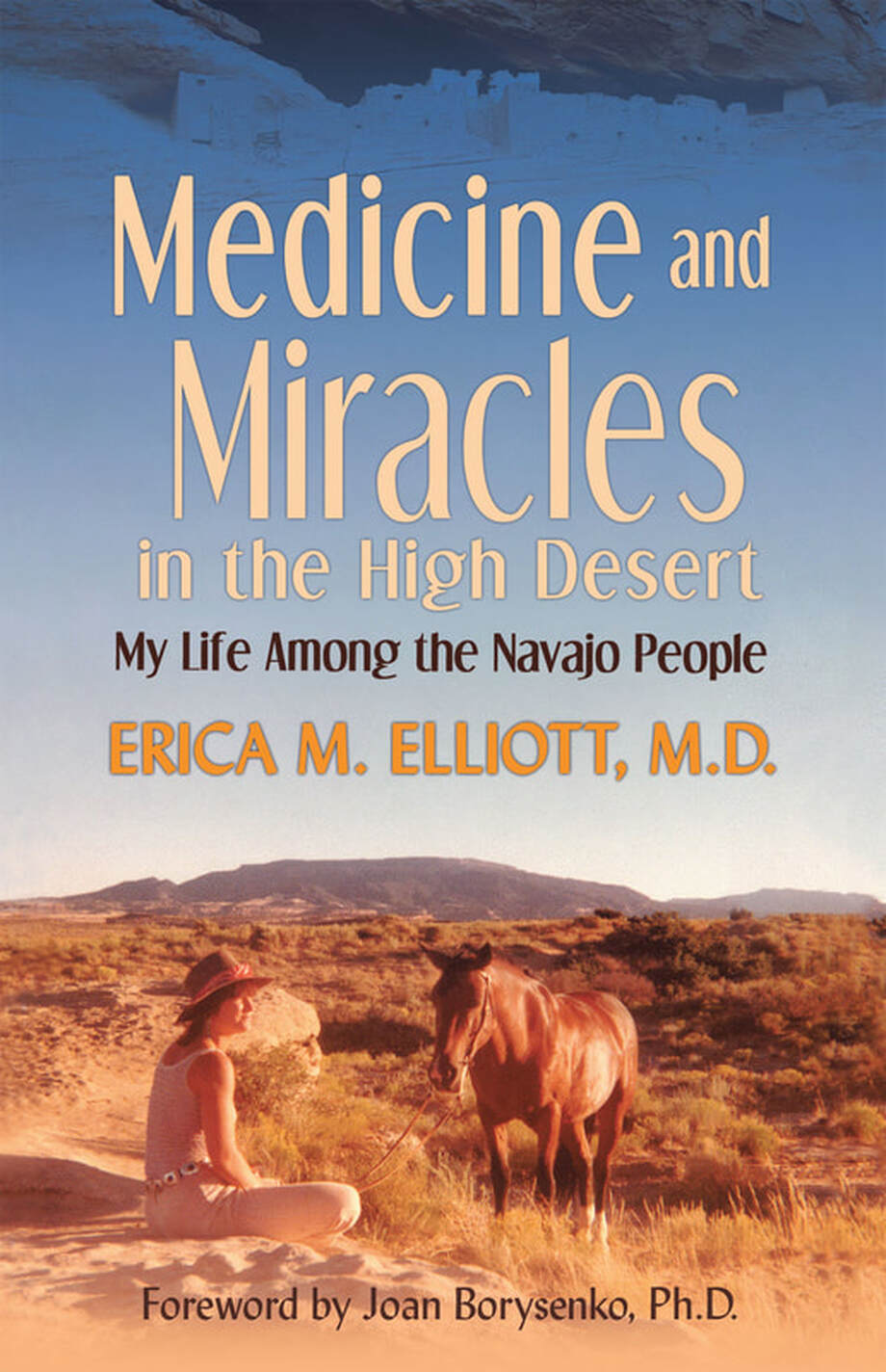 "Cuba, New Mexico, 1986
It was early summer—monsoon season—when I began my first job as a medical doctor, fresh out of training in family practice. An overcast sky greeted me on the day of my arrival, along with thunder and lightning.
Overhead, a dark cloud released a curtain of rain that poured down hard against my car, driven by gusts of wind. Within minutes, the red clay road turned into slick mud. My two-wheel-drive Honda slid from one side of the road to another as I struggled up the long incline toward my new home in the foothills of the Jemez Mountains overlooking the little town of Cuba, located in a remote area of northern New Mexico.
A four-wheel-drive pickup truck sailed past me. The driver peered through the side window at me, no doubt wondering about the newcomer snaking around in the mud."

​---- How was this book received by the medical world who happily prescribe drugs at the slightest symptom?

Most of my mainstream doctor friends are fascinated by what they read in my book. But they are too entrenched in the world of corporate medicine to change—even when they are miserable doing the bidding of the drug companies.

In the UK we have (well most people I know) a kind of sympathy for the Native American people - the injustice is hard to bare.

Yes it is indeed hard to bear. I feel the same way. It totally breaks my heart.

I did a piece on the Brando Oscar speech by Sacheen LittleFeather of the Apache nation it really moved me - sorry getting off the point - You must have seen first hand some terrible injustice; how do you deal with that?

I deal with it by writing about it and telling the truth about what’s really going on.

You’re very well-travelled are you settled now? Are you practicing still?

Yes. I will probably continue to practice medicine till I drop dead, because being of service to people in ways that I’m good at is deeply meaningful and fulfilling to me. I am completing my life’s purpose. I truly love my patients will do anything I can to help them heal—on all levels, not just their physical bodies.
​
Did you spend some time in Ecuador? What is happening there is a crime against nature!

I was in the Peace Corps for two years in the Andes Mountains in Ecuador, working with Quechua-speaking Indians. Yes, it’s hideous the crimes that have been committed in Ecuador by the petroleum companies.

Can I ask what makes you happy Erica - and finally what’s next for you?

I feel happy when I can be of service to other in a meaningful way, when I’m in nature, when I’m working in my garden, and when I’m with my friends.  I think what’s next for me—in addition to continuing my medical practice—is to write at least two more memoirs about the almost mythological journey to finding my life’s purpose.

You and your readers might enjoy my blog posts.

The posts are a mixture of excerpts from the memoirs I’m working on, along with cutting edge medical information that does not contain the usual dogma with vested interests by the pharmaceutical companies. Many people have found the medical posts to be very helpful. I write them as a public service because I have way too many patients (1200) and can no longer accept new patients into my practice—sadly.

Thanks so much Erica I'm enjoying the book, big cuddle from me Paulie in London x

Many blessings,
You seem like the kind of person I would enjoy being with and having tea together to talk about life.