TwinPeaksUKfest.com - Link
For fans of Twin Peaks, the cult American TV series created by writer Mark Frost and director David Lynch, the annual Twin Peaks UK festival is a highlight of their calendar. Celebrating the phenomenal cult hit, that has captivated fans for nearly 30 years, from its launch in 1990 to the most recent 2017 series, the Official Twin Peaks UK Festival was founded by British writer and producer Lindsey Bowden in 2010 and has since become a hugely popular and firm favourite with both fans of the series and with Twin Peaks cast and crew members.

This September the Official Twin Peaks UK Festival returns to London to re-create the eerie, fictional town of Twin Peaks, over the weekend of September 29th and 30th at the London Irish Centre in Camden with activities extended to Camden Square Gardens.  Guests will be able to rub shoulders with stars of the show as they dig into some damn fine cherry pie with a cup of coffee.  David Lynch Coffee in fact.

Just added to the exciting list of stars attending the event is singer, musician and actress Chrysta Bell
"Hailing from Texas, Chrysta Bell is a hugely successful singer songwriter, musician and actress, starring in 'Twin Peaks' in 2017 as Special Agent Tamara Preston. Her partnership with David Lynch started back in 1999 when they met.  Lynch has co-written and produced two of her albums; 'This Train' and 'Somewhere in the Nowhere', as well as co-writing her track 'Polish Poem' which featured on his 'Inland Empire' movie soundtrack.  Lynch has said of Chrysta Bell “The first time I saw her perform, I thought she was like an alien. The most beautiful alien ever.” Chrysta Bell joins the Peak-tastic line up of:

Dana Ashbrook played Bobby Briggs 1990-1991 in the original series; reprised his role in the prequel film 1992 ‘Twin Peaks: Fire Walk With Me’ and again in David Lynch’s revival series in 2017 ‘Twin Peaks: The Return’.  Dana’s well known to TV audiences from his appearances in popular series such as ‘Dawson’s Creek’, ‘Rules of Engagement’, ‘Law and Order’ and many more.

John Pirruccello played Deputy Chad Broxford in ‘Twin Peaks: The Return’. John is a well known TV/stage/film actor, comedian, and voice artist lending his voice to a great many TV and radio commercials, video games, cartoons, movies and TV series including ‘Two And A Half Men’. John can currently be seen in HBO’s smash hit comedy drama ‘Barry’
is one of this year’s star guests:

1. Tell us what you’re looking forward to about coming to London and attending the official Twin Peaks UK Festival?
JOHN: ​I'm really looking forward to meeting all of the great fans in person I've been interacting with online and the new ones too. A few of them have offered to buy me a pint. So…free beer! I'm looking forward to free beer in London.
2. Will it be your first visit to the UK? If not, tell us about your last visit
JOHN: ​It is not my first visit to the UK but I have not been for a good long time. It will be a lot like a new city I'm sure with an air of familiarity to it. I really loved London way back then.
3. Describe your character: Deputy Chad Broxford
JOHN:​Chad is a broken man. He’s arrogant, self-centred and entitled. And not entirely honest! Not nice.
4. What was it like performing in Twin Peaks last year?
JOHN:​Performing in Twin Peaks was like a dream. A wonderful dream that seems to be recurring!
5. Were you a fan of the original series or was ‘The Return’ your first foray into the world of David Lynch?
JOHN:​I was very much a fan of the original Twin Peaks. It woke me up like it woke up the rest of us fans. It was a disruption as David (Lynch) might call it. It was impossible to see television the same way after.

Singer Rebekah Del Rio will be performing at the festival on Saturday September 29th.  Rebekah is legendary in the world of David Lynch for her cameo in the film ‘Mulholland Drive’ (David Lynch, 2001) when she sang acappella ‘Llorando’ (the Spanish version of Roy Orbison’s ‘Cryin’’).  She also performed the song ‘No Stars’, written in collaboration with David Lynch and John Neff in Part 10 of  ‘Twin Peaks: The Return’.  ​​ 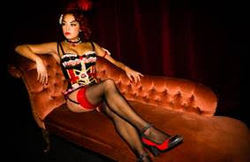 Alongside Q&As, signings and star performance events and more, the rooms and hallways of The London Irish Centre, housed in a beautiful Regency terrace in Camden, north London, will be transformed into the legendary town of Twin Peaks.  And Fans and visitors to the 9th annual Official Twin Peaks UK Festival will be able to enjoy a sumptuous feast of entertainment and excellent refreshments as well as guests, autographs, live music, opportunities to purchase official merchandise and a few surprise encounters along the way.

Welcomed by the One Eyed Jacks girls, festival guests will have access to screenings (including Lynch inspired fan made short films), and live performances from Lynchian burlesque and cabaret troupeThe Double R Club, who produce very funny, very dark, sexy and nightmarish scenarios based on their favourite Twin Peaks characters.

The festival Art Gallery will showcase inspired fan art including the popular ‘Return To Twin Peaks’ photographic exhibition by Canadian photographer Blake Morrow; his photos are coming straight from the Series Mania Festival in Lille, France.  Downstairs the Roadhouse/Bang Bang Bar will be hosting live music on both days of the festival, with DJ sets on the Sunday evening.  And there will even be live owls on show in the section named The Call of the Owl – a vital aspect of the Twin Peaks legacy.

This year a special treat will be in store for visitors – a train carriage will be parked in Camden Square Gardens, and will offer a thrilling VR experience – with actual locations shot in Washington State.  To enter the train car the fans will need to go through the circle of trees that is the ‘evil in these woods’ Glastonbury Grove.  After visiting the real life locations, they can relax in the picnic area.

The Official Twin Peaks UK Festival’s Founder & Producer is the vivacious and creative writer/producer Lindsey Bowden (left): “Twin Peaks is as legendary for its style as its eccentricity, its murders and its offbeat humour.  I love the unique mix of eccentric characters, eerie small town atmosphere and surreal storytelling. I created the festival in 2010 and through the last eight years it has grown and developed into something very special with a lot of the fans returning year after year. We look forward to welcoming long-time Twin Peaks fans and the new generation of fans who discovered Twin Peaks in 2017 with the third TV series. This year’s festival promises to engulf them in the world of Twin Peaks within the context of David Lynch’s wider body of work.”

Official Showtime merchandise will be on sale along with plenty of other damn fine festival merchandise including Lindsey Bowden’s own book ‘Damn Fine Cherry Pie’ – a Twin Peaks inspired cookbook, published in 2016 by Octopus Books and Harper Collins.