How Further To ​Olé

​ How Further To Olé 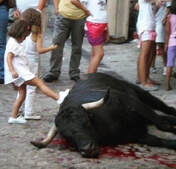 How further than this can mankind sink
$70,000 paid! ​A rhino’s death the sickest trade
For horn in China so highly prized, wins elections gives erections
“Highly blindly sought by the greedy elite of developing backward cultures”
“I know well Picard, the prime directive
But they wage war with the sea! Pick at species like vultures!”
Until they’re all gone, sorry you’ve had the last one
What price Is fair? Might take some thought, for the final Dead Rhino bought
​Too tempting still - even though killed if caught
For the African native still entrenched In slavery
To third world poverty & corrupt trade and industry
How further than this can mankind sink
Depriving a frightened bull of light
To disorientate for it’s ‘noble’ fight
Then startled it hears the baying Spain
It's pierced with swords terrified tortured
Desperately pleading to be free again
Yet death was applauded a brave gladiator lauded
When It’s ended don’t be offended
Listen, it's tradition It's only a bull
Not a peaceful prisoner filled with fear and searching for compassion
​Looking out for anyone to help him without understanding
Trapped for torture to die alone, with the smell of death In a barbaric bull ring
Then a Spain bereft of Remorse or shame, shouting loudly on their way home, proudly proclaim
“Final death Is quick!”
Leaving the pitiful bloody slashed body for Spanish children to kick
Olé
pauliepaul
google.com, pub-1336815800049544, DIRECT, f08c47fec0942fa0