Dave Robinson needs no introduction, I first met him at Vagabondz, a club night at Corsica Studios run by his son Jack. I  must admit to feeling privileged that night. Dave is such a big part of British culture and a fascinating man so when I got the chance to interview him it was difficult to know what to ask him. I just loved hearing the story, the history of an important time in British music/culture, told by the man who made it happen.
Did you work with Hendrix Dave?

Many years ago yes, I was his tour manager, but that was years before Stiff.

How did your involvement with Ian Dury start?
Ian used to do a lot of gigs but he never really caught the public's imagination at that time.
When he went to Blackhill who became his manager...(they had managed Pink Floyd etc so had a good CV) he met Chaz Jankle. Ian always had good lyrics and he was a great singer. Chaz was more into funk by and large and Ian was into Gene Vincent more of a rockabilly.
Well they wrote this album and while they were doing the demo which I heard and thought sounded good, they met a band called 'Loving Awareness.'
They were a hippy band their name really summed them up.
​
​They had been sponsored by Ronan O'Rahilly the founder of radio Caroline and had been rehearsing for nearly a year, never really having done any gigs when Ian and Chaz met them in the demo studio. They got together with the drummer and the bass player Norman Watt - Roy. It was an unusual combination....
Ian immediately changed the name to the 'Blockheads' which from 'Loving Awareness' was quite a shift.
Then they made their first album, which Blackhill really thought was going to get the attention of EMI and the majors.
I knew they would never get a deal with Ian...
He was 34 and unfortunately very crippled and he was very out spoken .... They went to a lot of meetings but I don't think anyone listened to the music or even thought about it, they just looked at Ian and thought he's too old, and he can't sing....
Then it all came back to 'Stiff' at that point, we were in the same building as them so they offered it to us as a kind of a favour.
Then Ian and Chaz produced 3 great singles that weren't on the album and it all took off.
They toured with Elvis Costello which helped. Ian saw this as a lifeline, and was very competitive but Elvis was just starting out, and really chilled. 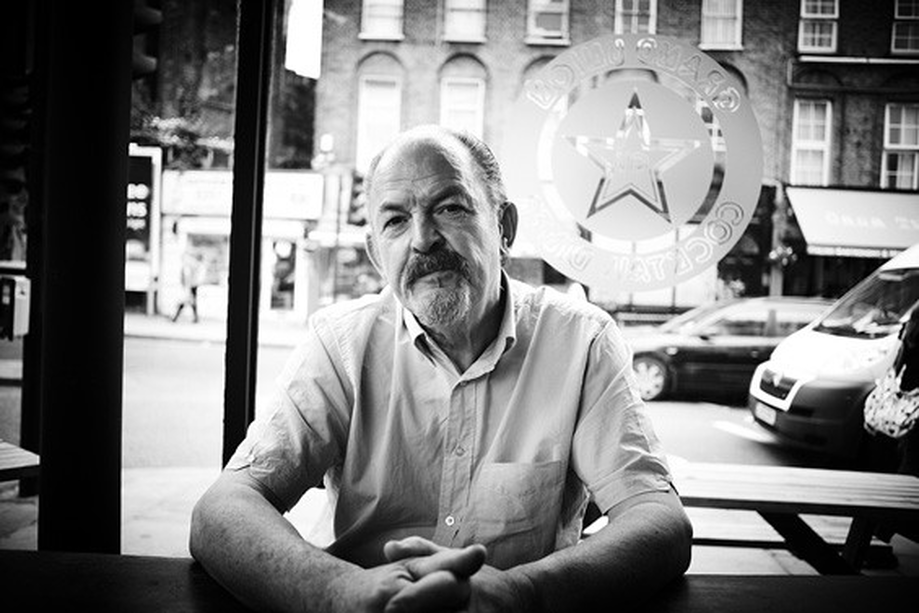 So those big labels missed a trick Dave, It was a good move for you.

It was Ian's son on the cover wasn't it?

Yes Baxter who is a musical talent in his own right .

​At one point Dave were you running Island records as well as Stiff in the 80's?

Did Island had a lot of stars at that time?

There were no names on the label at that time, the label was broke. It hadn't occurred to me that they were broke! To me Island was the model label. When I started Stiff I always had one eye on what they were doing. They were the complete package. They managed, had been the agent, owned the studio. They had the whole game in their pocket. If you signed with Island you had a lot of people looking after you.
Unfortunately when I got there... Well Bob Marley had died, U2 were still there and Steve Winwood, but every one else had gone!

No Grace had gone too. Nearly all the names had left the ship because of a lack of money, no one had been paid.
Fortunately, Frankie Goes to Hollywood had arrived at the label though, through Trevor Horn. They were having trouble because everyone thought their song  'Relax' was very risqué. So I worked on that, and got that going.
We were lucky with a bit of TV and then a radio 1 dj threw the record at the wall refusing to play it saying it was obscene.
​
​I remember that well, it was Mike Read...

This was marvellous PR. The BBC phoned me up and said they were going to ban the record, I said well I can't understand why, it wasn't definitely about anything!
Then they had to tell the press why they had banned it! They said it was about ejaculation.... I mean you just couldn't write a better PR script. -
Everyone had to have a copy, we couldn't press enough!
We found that we could change the mix to comply with the BBC and put it out again. We put it out 3 times in the end, and each time the public bought it.

I remember seeing Relax on 'The Tube' Dave, was that the lucky TV you mentioned?

The Tube was good, and then the T shirts, 'Frankie Says' ,they did really well. The second single 'Two Tribes' was great, and it had a great video which kept everything rolling.
Then the album came out , 'Welcome To The Pleasure Dome', that is still one of the biggest selling British albums. We shipped 1.2 million copies of it!

People bought albums back then.

They bought albums, they bought singles, they bought T shirts!
Another thing I did that year was 'Legend', Bob Marley's greatest hits. This pointed him at a new market.
Island had him in khaki looking dangerous and the British public didn't go for that.
They thought Bob Marley didn't like them! They hadn't bought into his catalogue, although he was a cult figure and a lot of people liked him he hadn't really had big record sales. This amazed me.
​Legend has sold around 44 million copies now , so we made some money back for Island because Stiff had to put a lot of money in to keep it going!

I think you get a lot of respect from people for signing who you did. Particularly with Stiff. Unknown bands at the time, which became really influential. Ian Dury is a given, but 'The Damned' for example.

The Damned played the Albert Hall recently! ...It's 40 years since we put out the first Punk single by them 'New Rose.'
A lot of who we signed were musicians, we found songwriters, people who could write and who may or may not have had oil painting looks.
We all hated that glam rock, so Stiff was a reaction to all that major record label vibe.
We got a lot of people who were turned down by the big labels or who had left. We had the slogan "Undertakers to the record labels."

What about the other slogan (laughing) "If It Ain't stiff It Ain't Worth A  W**k " . Who came up with that?

A guy called George Butler, he was a Scottish drummer in various Stiff bands. We were standing at a bar in a Kensington pub, and he was as pissed as a rabbit when he first uttered those famous words....

That's brilliant... What do you enjoy doing now Dave?

I do a lot of consultancy work, helping people and bands who want to put their own records out, that keeps me busy. I'm working on a Gregory Isaacs compilation at the moment, I love my roots reggae.

Finally Dave I met you at one of Jack's (Robinson) Vagabondz nights, in the small hours at Corsica Studio's. Do you still get out late nights/ early mornings or are you in by 9?