"Rita Osei is a Director, Producer and Writer. Nominated for Seville European Film Festival's Europa Junior Award. Rita's directorial feature debut Bliss! had its World Premiere at the 70th Edinburgh International Film Festival, Best of British Strand. Graduating from University of the Arts, London with a Joint Honours BA in Visual Arts, she began her career in Film and Documentary development at 1515 Productions. There she assisted Executive Producer Nick de Grunwald, son and nephew of Producers Dimitri & Anatole de Grunwald, who produced such films as 'The Millionairess'. Rita produced Award-Winning animation for Turner Broadcasting Europe (Cartoon Network, CN Too, Boomerang, Toonami) for 6 years. She founded Sugar & Water Films Ltd to produce her first short film, Threesome. It screened in the Calling Card Program at Telluride Film Festival and numerous additional film festivals, and was nominated for a Stella Screen Award. Threesome sold to Sky Movies and Canal + and was distributed worldwide by Canada based Buzz Taxi. She directed, produced and wrote short films: Too Much Love, Room To Let and Screen South part funded The Curry Club starring Cleo Sylvestre, Ruth Sheen and Olivier Award Winner Kenneth Cranham. All her shorts screened at international film festivals. Rita has directed 2 theatre productions, both A.R Gurney Jr. plays. She also writes poetry."

Hi Rita, yes,  I know its a cliche first question, but how -  what got you into making films?
​At school during the very early 80’s, and having the good fortunate to attend a state primary school which used Montessori learning techniques, I volunteered to go to a poetry workshop during class time. It was also being filmed for television documentary. The cliché of lights, camera, action and story was illuminating to me, and I was hooked.
Often the arts collide - you mentioned poetry at school - were you interested in other mediums? Did you study after school?
During the early 90’s I studied visual arts at Camberwell College of Arts on the newly founded joint honours BA degree course. It employed some incredibly inspiring lecturers, and included guest lectures from Zandra Rhodes, Brian Eno and the late Malcolm McLaren. My subjects were Fine Art, and the History of Art. I began the course as a painter, and before the end of the 1st year of the 3 year BA degree course, begun using film as a medium. That was complimented with studying the history of film on the history of art side. During the 3rd year I started to notice that most of my peers who were being preened for success were white males, and as we were pretty much an even split of men and women, it was a shock ​
I know a little bit about your drive Rita,  I'm not going to dwell on the obstacles that have tested you, but I know you've overcome a lot of negativity which must have involved a lot of self belief!?
I am a believer that self-belief is an internal part of a healthy existence, which requires consistent nurturing. I think if we give self-belief a mercurial component, attributed to a particular set of circumstances it disempowers. Women have had to learn this in a previously bias, hopefully changing, TV & Film industry. 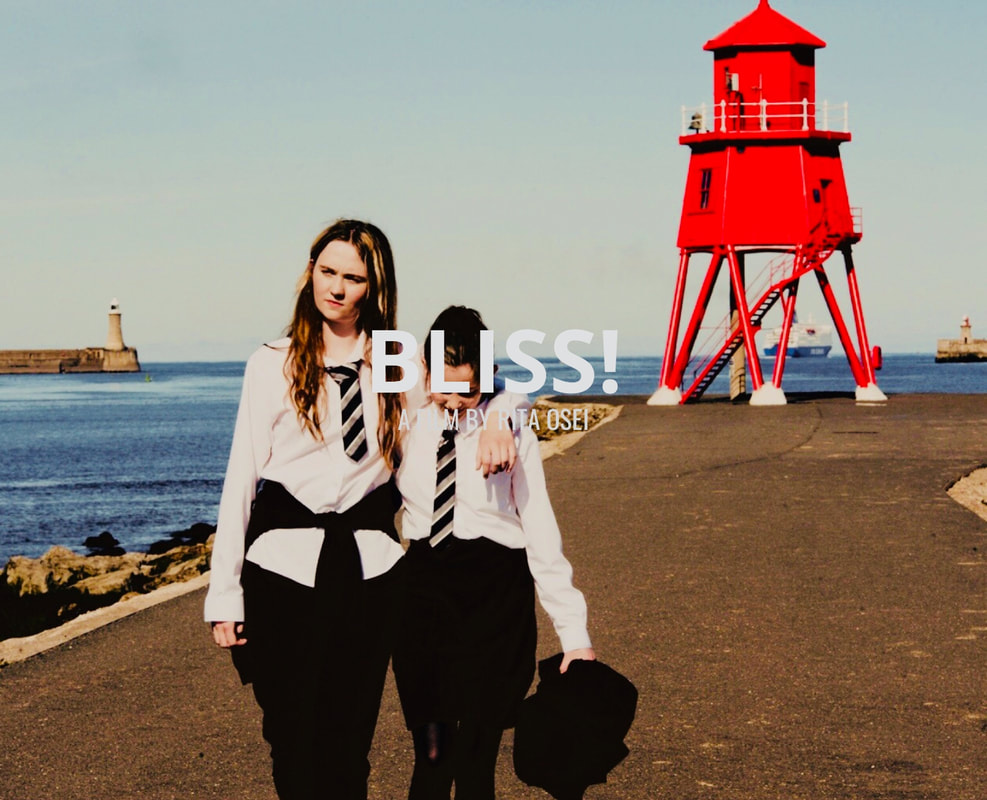 Michelle Olley reviews Bliss The Movie for Phacemag -
As a  film director, has the experience, journey, and subsequent success of Bliss The Movie opened doors for you? Can you talk about that journey?
Yes it has helped. I have had a few film directing offers since Bliss! Unfortunately none were right for me. I also recently had my very first availability check for a TV series. I was so excited that the producer had to remind me he was only checking availability at this stage. TV is now really interesting to me. Much innovation is happening through TV, Netflix, Sky etc..
I began developing Bliss! in 2003 with initial financial support from Northern Film & Media. Bliss! went through a long financing process before finally filming in 2015 and premiering at the 70th Edinburgh International Film Festival in the Best of British strand. The financing of Bliss! was a difficult experience, which I had to overcome. The early support from Northern Film & Media opened a big door in general, and with support from great mentors, including Oscar Winning Producer of The Deer Hunter, Barry Spikings, I’ve been able to begin to build my career as a Feature Film director. They are some of the people I hope I’ve made proud.

In 2008, thanks to Producer Jo Nolan nominating me, I received a Breakthrough Brit award from the then UK Film Council (UKFC), now BFI. The award, championed by the UKFC’s diversity department was a series of introductions, masterclasses and meetings in London and Los Angeles. Culminating in an award ceremony at the newly opened London West Hollywood hotel. The award opened another big door for me, and I hope to work with the BFI again on film projects.
​
​While all 12 Breakthrough Brits were in Los Angeles we were invited to the premiere of the documentary 2 Turntables and a Microphone. The audience was full with recognisable faces from the acting and hip-hop music scene, and just before the film begun it was announced that Barack Obama would be the Democratic candidate for the upcoming U.S elections. It was a magical and inspiring moment as the room erupted in celebration
What's next Rita?
Currently I’m writing, which enables me to direct and produce the projects I have to make.They include visual documentary, an episodic series and a feature film.This year I published my first book, a poetry anthology, through my new company Rich Witch Films & Publishing. WOMAN Remapping The Territory Our Way is 50 poems from 16 global female artists. It's available now via Amazon Kindle #WOMAN
The official book launch happens on the evening of Wednesday September 12th at Vout-O-Reenes private members club, London E1. With poetry readings from some of the artists featured in the book, including Marijne van der Vlugt, lyricist in celebrated Brit Pop band Salad. Salad are currently in the studio recording their first album in 21 years. It will be a special evening.
I will follow that up and share Rita, thanks so much for this, let me know, but i'll remind you about the book launch pp - xx
pauliepaul
share
google.com, pub-1336815800049544, DIRECT, f08c47fec0942fa0