London, November 25 2020: Universal Music UK has today announced the launch of 0207 Def Jam, a new frontline label and the UK home of the iconic Def Jam Recordings label, with a stellar cast of execs including the appointment of highly respected industry executives and Ghanaian London-born twin brothers, Alec and Alex Boateng as co-Presidents. 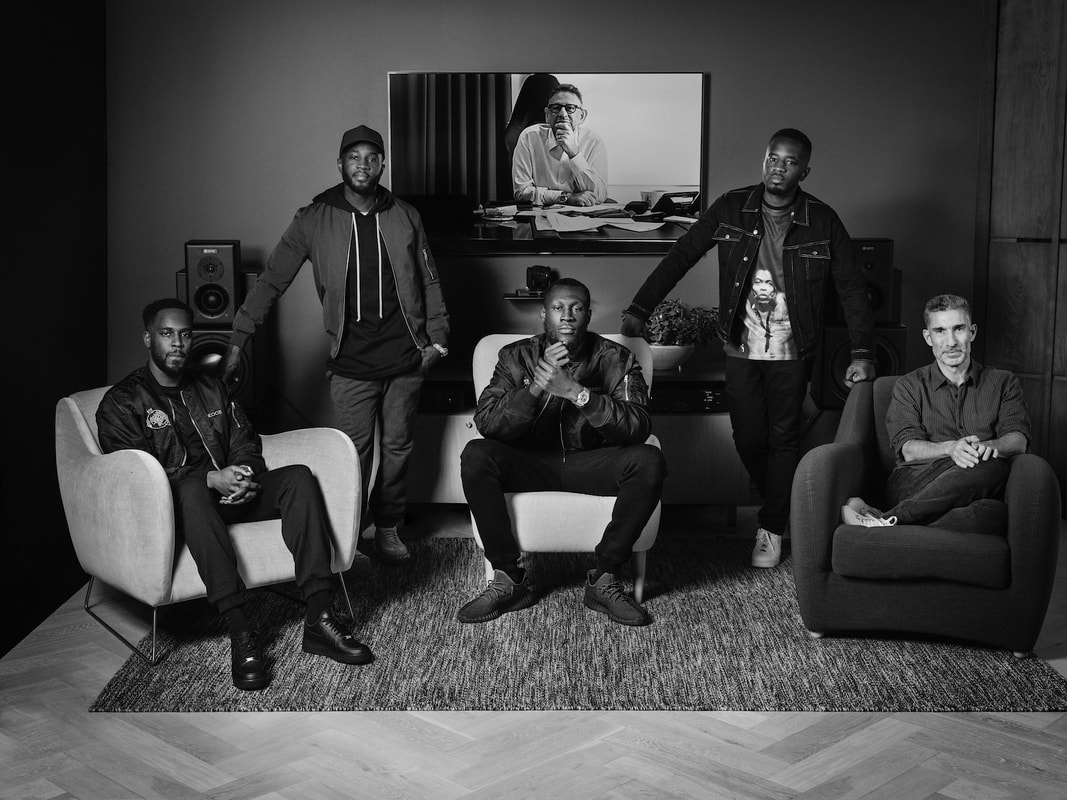 Stormzy pictured in October with (L-R): Tobe Onwuka (Stormzy’s manager), Alec Boateng (co-president, 0207 Def Jam), Sir Lucian Grainge (Chairman & CEO, Universal Music Group), Alex Boateng (co-president, 0207 Def Jam) and David Joseph (Chairman & CEO, Universal Music UK).
0207 Def Jam, which takes the first part of its name and inspiration from a telephone code in London as a nod to the music, culture and art the UK is famed for, is partnering with the legendary Def Jam label which has shaped and propelled cutting-edge hip hop culture around the world for over 35 years.

"I have no doubt that Alex, Alec and their team will only make the label and the brand even stronger.” : Jeff Harleston, interim Chairman & CEO, Def Jam

Alongside his brother, Alex takes the helm after 10 years at Universal Music UK, most recently as president of Island Records’ first Urban Division which has played an instrumental role in shaping the current and sustained trajectory of UK Black music. After taking the role in 2018 he oversaw UK campaigns for Drake, Tiwa Savage, Buju Banton, Nav, Giggs, Unknown T, Ray BLK, M Huncho, Tekno and Miraa May whilst also spearheading the campaigns for George The Poet’s debut book release, British film, The Intent 2 and UK based clothing brand/label Lizzy. Alex is a member of Universal Music’s Task Force for Meaningful Change, which was created as a driving force for inclusion and social justice. He joined Universal Music in 2010 in a digital role at Island Records before going on to hold positions in marketing and A&R, a period which included campaign launches for Tinchy Stryder, Drake, The Weeknd, Nicki Minaj as well as A&R for artists including JP Cooper, Sean Paul, Jessie J, Dizzee Rascal, Donae'o and Big Shaq.  He started his music career balancing a marketing degree with DJing, multiple shifts at radio and running his own marketing and promotions company with his then BBC 1Xtra colleague G Money, moving on to consulting roles with Atlantic Records, Polydor and AATW.

Alec joins 0207 Def Jam after seven years at Warner Music, most recently as co-head of A&R at Atlantic, where he collected a clutch of industry awards and played a pivotal role in the commercial and cultural success of acts who have defined their era, including the emergence through to her chart-topping dominance of Jess Glynne, the revolutionary rise of Stormzy, Burna Boy’s rapid ascent to global superstar as well as the likes of WSTRN, Rita Ora, Kojo Funds, Stalk Ashley, Preditah and many more. A seasoned broadcaster, he also spent over a decade at BBC 1Xtra where he hosted the breakfast show for several years and a series of other specialist shows with a focus on breaking new British music. Alec remembers a passionate deep-rooted love of music as a child, evolving into DJing and leading the award-winning UK mixtape team Split Mics before halting university after he was headhunted to cut his teeth in A&R. First, he worked with Ministry of Sound and then began operating his own co-owned music company alongside the late industry lawyer Richard Antwi. Together, they oversaw a plethora of success with Wretch 32 and worked with artists such as Popcaan and Gyptian amongst many others.
Alex’s former Island colleague Amy Tettey will be joining the team as managing director after 11 years, the past four as finance director, at the Universal Music label where she worked across the entire roster of Island artists including everyone from Amy Winehouse to Drake and Dizzee Rascal to Giggs. Alongside Amy, Jacqueline Eyewe and Char Grant join as marketing director and A&R director respectively. Jacqueline - previously senior marketing manager at Atlantic where she spearheaded the marketing of Black music - has been deeply rooted in contemporary Black music and culture for the last decade. She joined Atlantic in 2015 where she has worked with artists including Stormzy, Burna Boy, Lizzo, WSTRN, Kehlani and Cardi B. Char, whose 10-year career has been immersed in artist development and management as well as songwriting, joins from BMG Music Publishing where she has published the likes of Giggs, Ghetts and producers P2J, TSB and AOD.

Alec and Alex report to Universal Music UK Chairman & CEO David Joseph. He says, “Bringing the Boateng brothers together at 0207 Def Jam is an important moment in British culture. Alec and Alex have always done things their own way with success always quick to follow. They have already assembled an exceptionally talented top team with a clear vision for this exciting new chapter in the history of one of the world’s most famous labels”.

Jeff Harleston, interim Chairman & CEO, Def Jam Recordings said, “It is a perfect fit having Alex and Alec at the helm of 0207 Def Jam. Their creativity, artist relationships, and connection with culture are all key elements that have made Def Jam such an important label for over 35 years. I have no doubt that Alex, Alec and their team will only make the label and the brand even stronger.”

Alec Boateng, co-President of 0207 Def Jam says, “Music, art and artists really, really matter. I’m super excited to play a leadership role in this brilliant new space we’re creating for amazing music and talent to live and evolve. A space which will support both our teams and our artists to be the best version of themselves.”
Alex Boateng, co-President of 0207 Def Jam says, “Especially in these times, this is a real privilege. I'm proud our collective journey now includes partnering a legendary label with a style that only London and the UK can provide. Looking forward to watching and guiding where the music and art takes the journey next.”
​
share
​
google.com, pub-1336815800049544, DIRECT, f08c47fec0942fa0