"We have all done it and everyone is lying if they say they haven't!" Mouth Wide Shut is a refreshingly honest piece of new writing exploring becoming a woman in 2018. Drawn, in part, from the real life experiences of writer/performer Georgia Bishop the show takes a candid look at the trials and tribulations of moving into womanhood. Mouth Wide Shut is a side-splitting, cringe inducing, tear jerking premiere directed by Kennedy Bloomer with an all-female creative team."

We're looking forward to this oh yes! As part of The Camden Fringe Mouth Wide Shut is a brand new play written and starring Georgia Bishop and directed by Kennedy Bloomer. paulie spoke to them ahead of the performances - fran 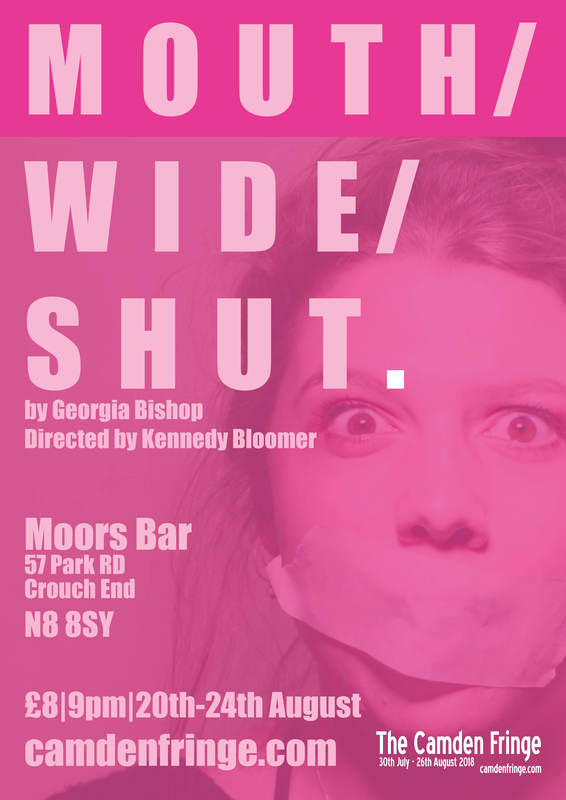 Tickets - Times & Details
Hi Kennedy/Georgia I'm getting the impression that a lot of hard work is needed to get a fringe production from idea to performance has this been a long time in the planning?

G:We'd talked about putting on a play together and I started writing it last summer so from initial idea to actually performing it has been a year long journey.

K: This play has undergone so many redrafts and edits. I encouraged Georgia to write something for my MA Theatre Directing showcase in 2017 but ended up going down a different route. After that we picked it back up and just thought - we need to get this on somewhere!

K: Main obstacles are definitely finance and making sure that we can pay our rent but also save up for the venue fees haha! We're just two artists trying to get some work out there but we were determined and it's working out pretty well. We've had great support for our crowndfunder campaign but we still have a way to go! https://www.indiegogo.com/projects/help-mouth-wide-shut-get-to-the-camden-fringe-sex-women#/

Is it a new play Georgia, I understand you are also performing is that an advantage or disadvantage for a writer when working with a director?

G: Yes it is a new play and it's a one-woman show that I'm performing. I I feel like it's an advantage because I know what I've written and know my character, and myself and Kennedy have such a good working relationship and prefer to collaborate, discuss and play with the text to really interrogate my writing so I can get the best performance out of it.

How did you meet Kennedy have you worked together before?

G: Yeah, we met at Mountview Academy of Theatre Arts accommodation day and both had nowhere to live. We got on straight away and ended up finding something to live together so were housemates while we were training. We don't live together anymore but that's how we starting working together on this play. I was on an acting course and Kennedy was on the directing course. We have worked together before at a one-night show in the grounds of Moseley Old Hall in the West Midlands, which was really fun to explore.

I'm intrigued about the play, I have made short films in the past and compromise seems to rule during production, has the play fought you along the way?

K: It's gone through so many edits just because we want it to be the best it can be. I wouldn't say it's fought us but it's definitely made us very excited so we end up playing with it in a lot of different ways... but sometimes they don't fit together very well.

G: From a writing perspective I've definitely hit a few brick walls but then its great when you suddenly have a lightbulb moment. In terms of compromise, whilst I was writing it, it was important to not be precious about things if they weren't working and being okay with scrapping whole sections sometimes. It was always needed to move the play forward.

Finally good luck my office is in Crouch End so I hope to see Mouth Wide Shut on one of the nights.. paulie