first published a while ago...

Building on the gains of regional touring and an overwhelmingly well reviewed and received sophomore effort, The Popravinas (pope-rah-veen-ahs) return with nine new tracks of indie California gold.

"We really wanted to get more music out as soon as possible," explains John Adair, the band's multi-instrumentalist and producer, "to capitalize on our second albums' wide, international reach."

The band formed in the mid-2000's and until 2017 had only released one effort,  Everybody's Fault But Ours (2008), which garnered some nice press and a few end of the year "best of" lists.  2017's "California Sonic" reinvigorated the band with extensive touring and considerable airplay on independent radio and online outlets around the country and around the globe.

Eddy, the group's songwriting force, touched on the success of the first single, Sofia (CMU), from the new release, "Willy Nilly." Originally commissioned as reward to a past crowdfunding campaign for touring finance, it has blossomed into the first taste of the new record.  It has already been added to stations in Alaska, Connecticut, Massachusetts, Australia, Florida, Ireland, South Africa, Sweden, Spain and the United Kingdom to name a few.

"It has really taken off in the UK, as there is a Central Manchester University," remarks John. "We like to keep the interpretation open, although Eddy does have a bit of a Pittsburgh accent if you want a hint."

The band is looking forward to plenty of stateside travel with shows already booked in California, New York and Pennsylvania.  More markets are sure to follow, with offered opportunities in Ireland, France and Spain.

As The Popravinas always say... they'll "See You At The Bar!" 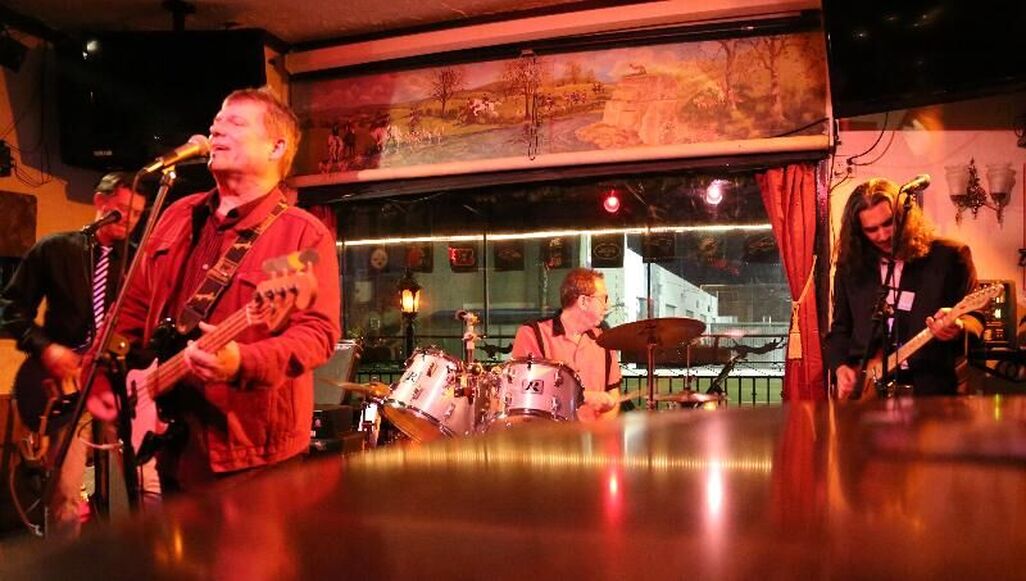 Hello guys, I love the new album, especially 'Did Ya' and the last track 'Up The Coast To San Francisco' that sparked my imagination.
I have to ask about your name?

Pronounced Pope-rah-veen-ahs, but we aren't picky.  Most say "pop" like pop music.  The pronunciation is a nice conversation starter/mystery I suppose :)
Eddy has some Czech relatives, and I believe he heard the term "popravina"from an Uncle.  It loosely translates to "the party AFTER the party" usually referring to a post wedding reception where the revelry continues sometimes until the next morning to consume the remaining food and especially the drinks!  It has the word "pop" in it and who doesn't like a continuing party?
We are certainly not a joke band but sense of humor is a definite theme and vibe of ours.

I'm always interested in how bands got to together, how did you meet?

Eddy: I met John over 15 years ago in Santa Monica, CA right after he moved from the East Coast (NY).  About 3 years later, We released our first record, “Everybody’s Fault But Ours” in 2008 to some pretty good reviews and response.
John: I answered and ad online and met up with Eddy to hear some of his songs.  I really thought his voice was very unique and cool. Soon after we were rehearsing and playing all the local spots.  I was teaching lessons and engineering at a small studio which was great as we did our first record there.
Eddy: In recent years we picked up the pace and released the well received “California Sonic” in 2017, and kept up the pace and increased awareness with “Willy Nilly” which came out earlier this year.

And the obligatory but important question, Influences?

Eddy: Our influences are based around basic pop rock n roll bands like The Stones, The Replacements, Tom Petty, Ryan Adams, etc.
Kind of a cross between rock n roll meets power pop with some California twang and a sometimes alt-country feel.
John: We are both huge music fans, so you may hear an influence of anything from the 50’s until 2000 or so..
​It amazes me the different ways musicians write/contruct songs, have you got a set formula, how does it work for you?

Eddy: I usually have some lyrics and basic chord structures which we may run through at a rehearsal at first..
John: Eddy writes the lyrics and the progressions. Along with producing and recording the records, I play a lot of instruments and have a strong music and harmony background, so I get to compose and arrange most of the musical parts apart from the basic chord structure.
I also try to add some bells and whistles to the sound, along with a Beach Boys type harmony, etc.. It solidifies our California sound, even though neither of us were raised here.

You know I love that Beach boys (homage?) sound, I got it straight away, but it's your Beach Boys sound - It's done really well!

I love the story telling aspect of your songs - Is the song writing shaped around that?

Eddy: I started writing songs in a LA band called The Mutts in the late 80’s/early 90’s.
It has progressed through the years and lyrically it is based off of either real life experiences or experiences encountered from other people.
I try to keep things on the lighter side with a sometimes comedic touch lyrically, but there is also a serious side at times.
John: There is definitely a degree of real life events, people and places involved, but we can’t tell you.  We probably forgot all the facts by now too!

I love to know a little about your town, fav hangout? Is there a good music scene?

John: Well I technically live a little north of LA at the moment in Santa Barbara which is an idyllic coastal city, so I love to be at the beach or a local brewery, of which there is no shortage.
Southern California has a great scene and venues for established acts but it’s a bit crowded and challenging to support local music.  I know for ourselves we play 90% of our shows out of town which keeps us very busy.

Thanks so much guys and look me up if you get to London!
pauliepaul
​