'THIS IS BROKEN FOLK'​
DEBUT ALBUM
Out 31st Oct 2019
12” VINYL - CD
​DOWNLOAD
​Though Margate’s Lunatraktors strip folk music back to vocals and acoustic percussion, they manage to weave together a huge range of influences, finding themselves at the crossroads of trip-hop, art punk, music hall, drum’n’bass, flamenco, neo-pagan psychedelia and live art. Equally at home in a contemporary art gallery, queer cabaret or folk festival, their self-produced debut marks another pin in the map of New Weird Britain. ‘This Is Broken Folk’ collects seven broadside ballads from Britain, Ireland and Australia, a Cossack folk song translated from Russian, and one original. While the material is traditional, the themes of institutional violence, forced migration and personal hardship that echo through the songs are strikingly contemporary.

"The overall feel is of defiant, transnational protest laced with dark humour – an urgent political necessity in Brexit Britain. Singles ‘Turn of the Plough’ and ‘Black Raven’ out now on Soundcloud, Spotify and all major streaming services. An accompanying video by Hackney’s indie production house The Preservation Room is available on Facebook and the Lunatraktors website."

The album will be supported by a tour in Kent, London and Paris, beginning with a prelaunch event at Margate’s Tom Thumb Theatre on March 23.
​

Hey Fran! Yeah, we play live as much as we can. Since we started the project we’ve tried to take it to as many different audiences as possible. Clair’s experience is mostly singing in pubs and art galleries, Carli has worked on some really big theatre and festival stages. We both really love cabaret. What we’ve really been doing is exploring how our material comes alive in different contexts. The same folk song affects different groups in different ways, and can carry very different messages depending on what we wear, how we move. But now, pretty much wherever we are, we can open up a kind of alchemical space. Like an inter-dimensional portal or something, and take people with us to somewhere outside time, channelling these different characters.

You describe your genre as ‘broken folk’ – what does that mean?

It means a lot of things connected together. Broken in terms of heartache, politics, community… Broken categories and rules, breaking out of boxes. But also in terms of perspective; a multiple, fractured reality like a kaleidoscope or crystal. Broken like brokenbeat – syncopated, glitchy, suspended rhythms. We both grew up listening to jazz, drum’n’bass, trip-hop, early art punk like Talking Heads. Broken also in terms of tradition, like not feeling part of a tradition, or maybe feeling more connected to traditions from other places like flamenco. Flamenco has this intense passionate way of dealing with loss, with cultural violence that really resonates with both of us. The same with some Irish traditional music, although unlike with flamenco we both do have family connections in Ireland. Broken folk is like the opposite of the idea of a pure, nationalist tradition. It’s about rebuilding culture from fragments, from smashed remnants left by colonialism. 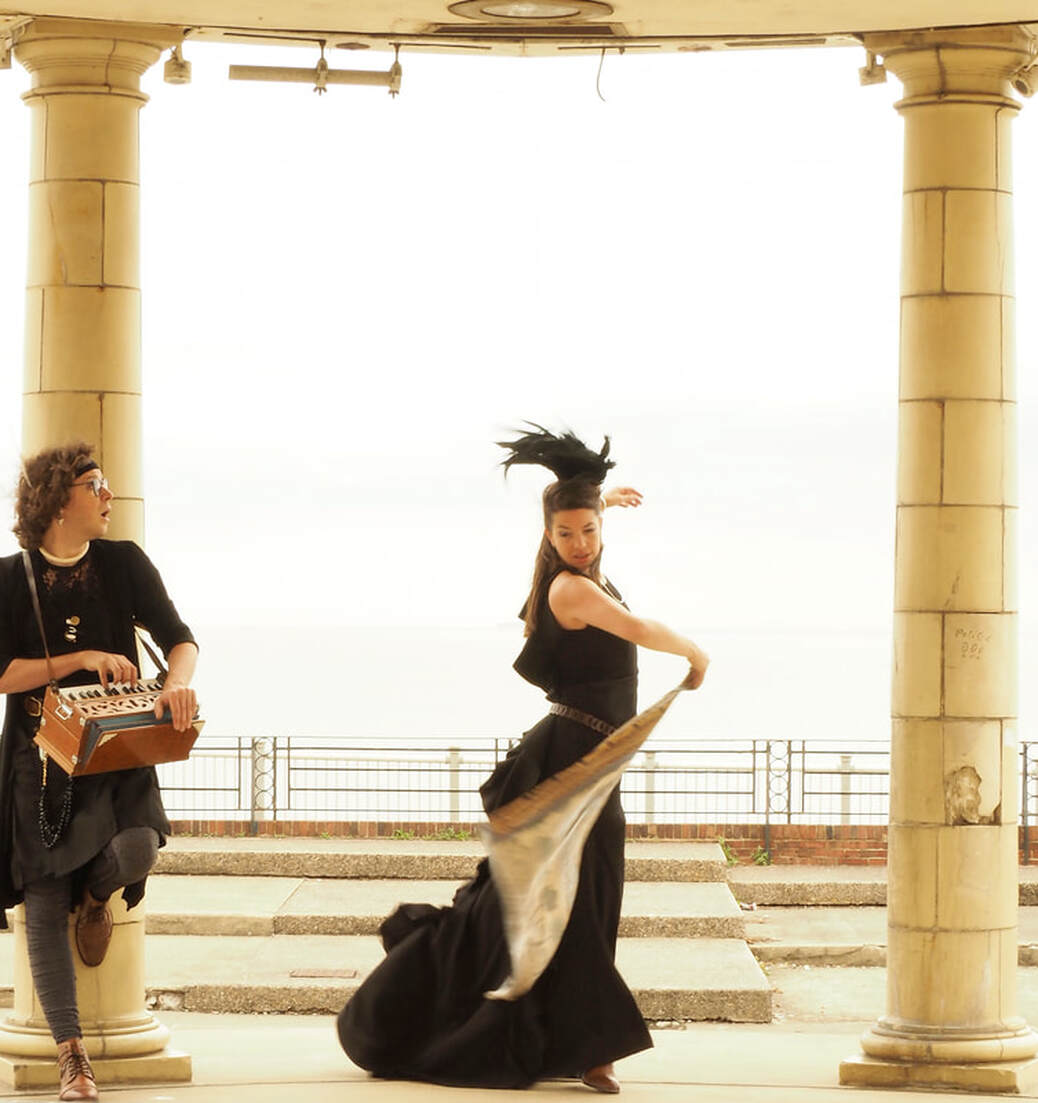 It’s about protest, definitely. It’s about a soft kind of defiance, connecting people emotionally. Lots of people mention to us that they can’t place us, we seem to shift. They can’t place our gender or sexuality, can’t place our musical genre. We range around this big emotional landscape from humour to deep lament; we get a lot of laughing and crying at our gigs. Also people saying that they get the shivers in a really intense way. We pull people in, take people with us on strange journeys. Disorientate them but keep them trusting us, feeling safe and able to let go. And that’s a political move, it builds solidarity.

It’s also the title of your album This is Broken Folk, which comes out in May. As an expressive live act that uses lots of things from theatre, dance, performance art, how difficult was it to capture that in the studio?

We chose a studio that had good natural resonance and would support us in recording everything live. Arco Barco is in the viaduct arches of Ramsgate Harbour, it has amazing natural reverb. We had a rule that we would record the songs in three takes or less, with no overdubs. We stuck to that except with the last song Ben Hall, which is kind of an epic 11 minute choral thing, similar to what we do with live looping on stage. And our co-producer and mixing engineer Raphael Mann has loads of live experience and really understands us. He was actually a dream to work with, unbelievably natural. He knows what we do live and had the skill to capture all the depth and range of the body percussion and footwork, which is really rare. Carli has done session work on a lot of albums, and usually the tap dance and body percussion sounds really clacky, really thin. Getting that detail on the body percussion gives a sense of physicality, movement and space. Raphael also managed to get Clair’s overtone singing, which is a big part of our live presence. Hearing a singer make more than one sound at the same time always trips people out. 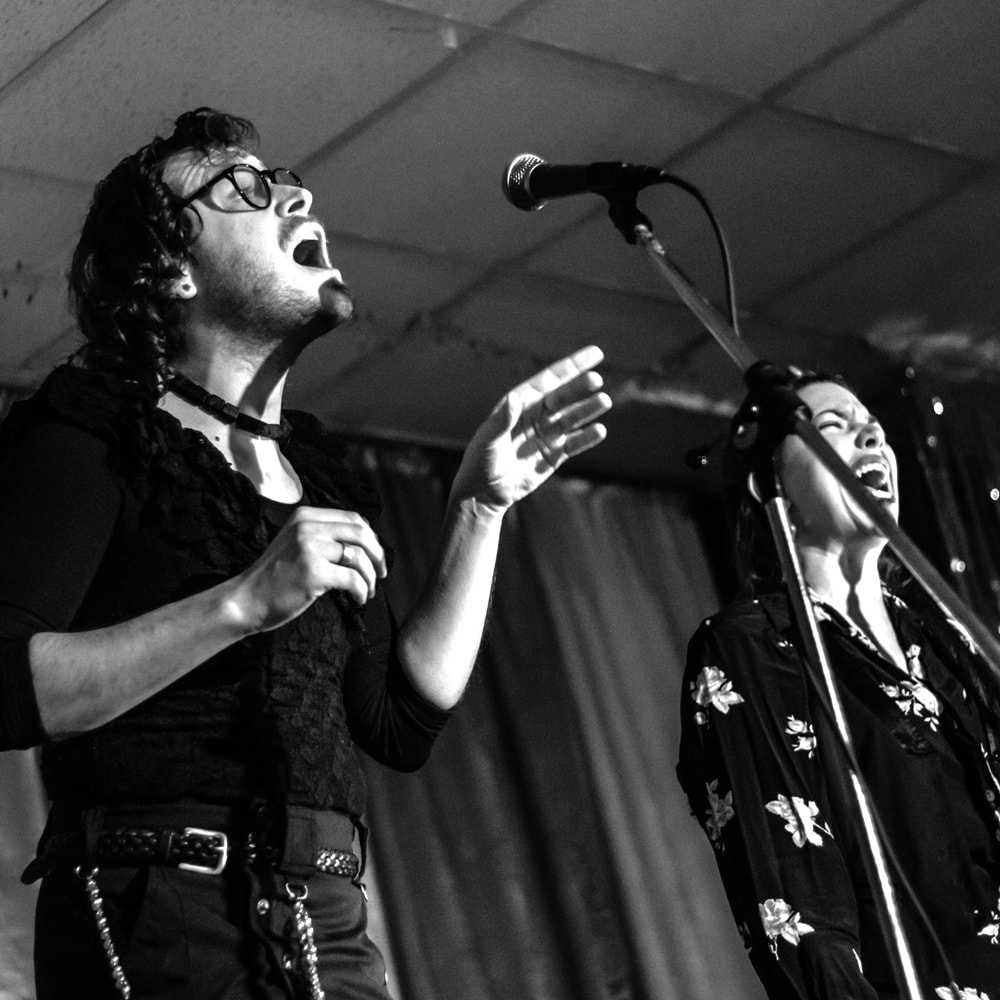 Photograph @imagedrum - Link Lunartraktor Facebook
​Where are you going next with this? What’s your plan for the future?

We’ve got two more albums’ worth of material ready to record. The future plan is basically do more, play more. Currently we’re totally DIY, we do all the design, management, production, sets, promotion... We’d like to share that out a bit – finding the right booking agent is something we’re looking into. We’re starting to spread our tentacles out a bit further. We’re supporting Martin Carthy at the end of March, which is great because he was one of the first shows we went to after starting the project. We’d love to be on the radio more, we’ve had a couple of spots on local radio and really enjoyed it. We’re playing London more, playing a couple more music festivals this summer. The amazing Marianne Dissard is helping us sort some shows in France. We feel ready for bigger gigs now, which is really just about more people hearing what we do and coming to see us. We’re really happy that it’s not just “people like us” who like us. We’ve had some great responses from older people, people who love folk music, people who hate folk music, small children seem to really dig it…

Just finally, you’re based in Margate, is the plan to stay there? It's getting a reputation for creativity...

We absolutely love Margate. We moved here to start the band and it was the best decision we’ve ever made. The creative scene here is really flourishing, very supportive and inventive. We’re big fans of the Isle of Thanet in general, the landscape, the architecture and the people here are great. We’re touring farther afield, but Margate is definitely home for now.