Hi Andy, firstly how have the Torstern albums progressed as a concept?

The concept comes from the third instalment of these albums, the first [Torsten The Bareback Saint]       was about seven years ago and then we had a second Torstern [Torsten The Beautiful Libertine] ,this is now in Queerteria. I've had the experience of the Torsten albums progressing, this was more intricate, the second was the most accessible, this was more intricate, I really enjoyed the exercise going to a place that isn't normally you. As a pop singer for Erasure, this brought me to places I’m not known for and I really enjoyed that. I met Barney at Mojo awards, he was at the same table, he was with the Cherry. He heard Fall of The House of Usher in 1990, which I was involved with. He discussed the character with me and modern opera interested me. Barney, he’s an archivist, he gets these artists and works for Cherry Red, reissues them, puts extra tracks, hardback book things, but main hobby is a playwright. 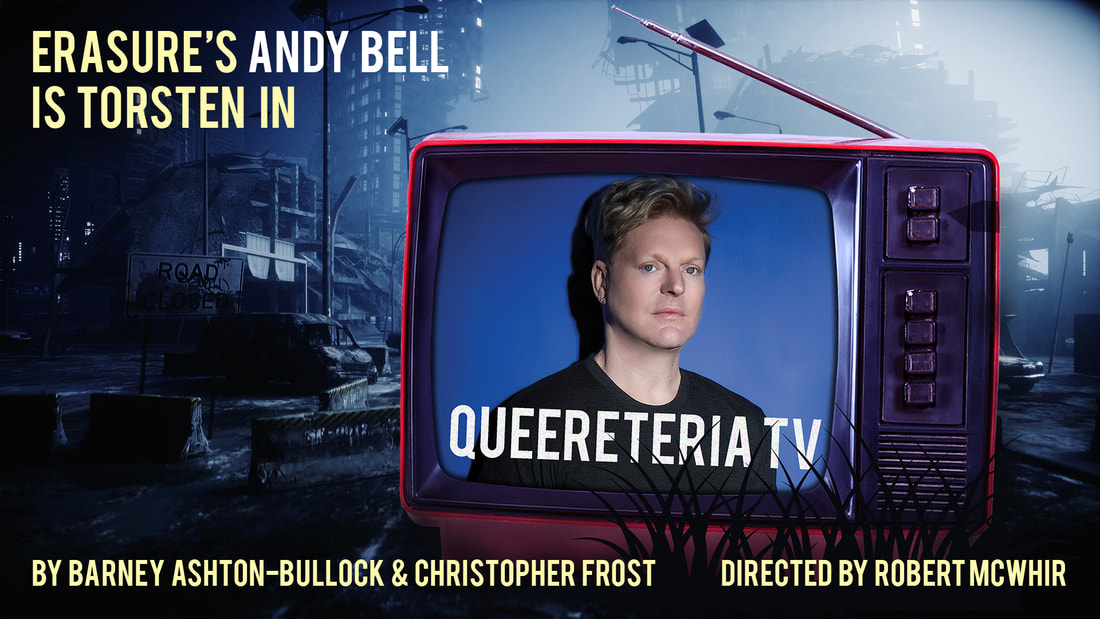 How does the four act play work in the structure and is it a homage to rock operas of War of The Worlds ilk?

No, not really. Why that happened, we'd recorded the fifteen songs, I am of The Sea, they didn't fit into a particular order, so we fit into three or four songs in a segment. There’s lots of things there. I kind of feel like the bits like reality tv, the dread, you know. It reminds you of Clockwork Orange, all soundbites you want to hear, like a popularity contest, no one knows what to make of politicians anymore. So here, we are three renegades to rebuild society in our demented societies on the world stage. I feel Brexit is a bit of a distraction from all that.

The enigmatic Hazel O’ Connor sings on the album. How was her contribution?

Great, haven't met her yet. I was a huge fan in the early eighties, she lives part time in Dublin, I've seen small posters around of her, but haven't had the chance to see her because we’re always playing there! She has three penny opera accent to it. I love the song Will You? She had a tv show with a reel to reel recording show, she was the main feature.

Will there be an opportunity to further explore Torstern?

I can see future projects with Torstern, I love Barney very much, very much like when I'm working with Vince. We’re quite cynical in the music business, he's a very shy person, but puts his vitriol into his work, Andy Bell is seen as clean cut, so this is an alter ego that allows me to spout my venom. I love it when artists like David Bowie change themselves. We supported David Bowie in 1996, sixth form, found it a bit intellectual, now in hindsight, I think what an amazing guy, how he can reinvent himself, Madonna started the reinvention, but for me it came too fast. The clothes were always changing!

How do you find working with the Torstern writers compared to Vince Clarke?

I've been working with Vince for thirty odd years, we have a psychic connection, write without speaking , it’s so natural. As for Barney, we tend to meet for coffee or when we get together on train journeys, almost non stop conversations,  and then part of the conversations go into the characters, so you can kind of relate. I sometimes wish these are things I haven’t said but it brings something to the characters. Again, going back to what I said about David, my favourite band is Blondie and I love how Debbie did characters in that film Spin. If this play works, I might do more.

And how do you feel about the impending play?

To be honest, I am quite nervous, we had one read through, still have to learn my words, first rehearsal on Monday, up against the wire, how I like to operate. I have done things in the past, I went to an all boy school and did a play about Stone Wall. But this is a great thing to push myself. To people thinking of going or buying the album, I would say if anyone thinks they know Andy Bell, think again [laughs].