Produced by Dan Burman and Mary McBain
Directed by Sarah Day
Cinematographer Carmen Fortea
A new short film about consent aims to empower men and women, and spark a wider conversation about the issue.
Dark comedy Spaghetti is written by Mary McBain, who stars in the film alongside Dan Burman. McBain was inspired to shoot the film after two uncomfortable experiences while working in Los Angeles in recent years.

"I wanted to take a negative and scary situation that happened to me, and turn it into something positive that will ultimately make a difference. Just because a woman becomes silent and goes along with something doesn't mean she's consenting. It's up to both people in that situation - one to speak up, and the other to check in."

#MeToo has done so much to create essential change, but we can do more to protect people at an earlier stage. This film isn't about finger pointing, it's about education and making sure everyone - men and women - feel safe and comfortable."

"We really want to start a conversation - our film will inspire people to spread the message that #SilenceIsNotConsent."
The film was shot by 20 female filmmakers in Wimbledon in February, with funding by MMcB Productions." 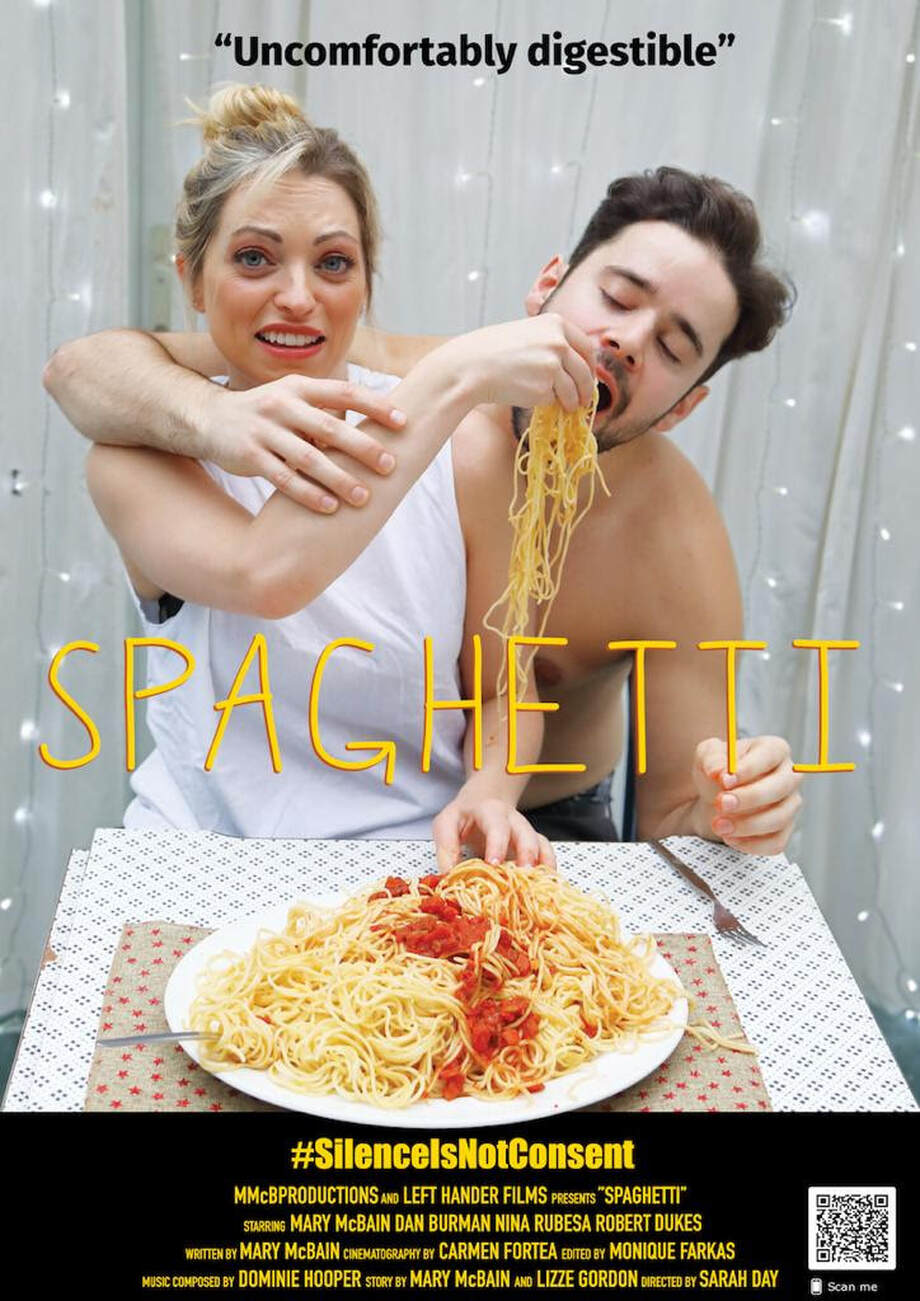 ​The Film Premiere of 'Spaghetti'.
​May 9th, BAFTA 195 Piccadilly, London

​The short-film ‘Spaghetti’ premiered at BAFTA this May, and what a film it was. Consisting of only 4 minutes it manages to remarkably pack a lot in.
‘Spaghetti’ is made in the aftermath of the Me-Too movement, exploring the notion of consent through dark comedy and metaphor. Amazingly, it is shot by an all-female cast. By cleverly employing the metaphor of food and the physical act of eating, writer Mary McBain manages to spark a conversation around sexual consent that empowers all.
The film’s narrative pivots on a flashback to a recent date involving the two main characters – played by Mary McBain and Dan Burman – in which the notion of consent is awkwardly confronted. It is confronted, however, in the context of Alice (Mary McBain) agreeing to go back to James’ (Dan Burman) for a post-date meal, after mentioning she was peckish. James takes this admission of mild hunger and runs with it. To Alice’s professed horror he cooks a massive mountain of spaghetti for the two of them to – let’s say ‘sensually’ – share and eat together. The portion size of the spaghetti, and the delicate social setting, makes the situation enormously intimidating to Alice, who tries to communicate her discomfort and reluctance to ‘eat spaghetti on the first date’ to a not-so-supportive James.
The connection between food and sex is a historic one, playing a popular role in a vast array of film and literature. McBain’s use of this metaphor is witty and involves *many* inuendoes – from the Spaghetti box strongly resembling a condom box, to James, rather liberally, adding pepper to the meal with his sizeable pepper grinder. This humour is of course successfully entertaining in-and-of itself, but it is infinitely more successful for its ability to portray such a sensitive topic in a truly ‘digestible’ – forgive the pun – way. The topic of consent is deeply sensitive, and often traumatic, for a horribly high number of people. With her use of comedic metaphor, McBain allows all to watch, enjoy, and reflect upon the short film and its message by creating a ‘psychological distance’ between the viewer and the topic’s reality. This psychological distance prevents re-traumatization and reduces anxiety, allowing any and all people to more safely and positively engage with the film and the movement it belongs to.
‘Spaghetti’ aims to play a role in educating on the topic of consent in schools, teaching and collaborating with young adults to remove the grey area that surrounds sexual consent, to empower people on both sides of the conversation, and give a British answer to the question of “Me-Too, what now?” This is a fantastic, deeply important cause. Show your support by following @spaghettithefilm on social media and watching it below.
Sophie Sheehan
​
share
​
google.com, pub-1336815800049544, DIRECT, f08c47fec0942fa0