"Charity Shop Pop is the monicker used by Dave Hughes, an indie pop artist working out of his bedroom in Ormskirk. Using his guitar and a MacBook he bought from a charity shop, he creates laid back, ambient tunes, full of melodies that park in your head for days, and make you want to either cry or dance along to.
His debut single Always You released on The Label Recordings,
Charity Shop Pop was a Merseyrail Sound Station 2018 artist and is quickly developing a cult following in Liverpool supporting the likes of Ali Horn and Witch Fever."

​Hello David and congratulations on the single, we love it and from where I’m sitting it’s doing very well!
Were you writing songs from an early age?

​Hi Paulie, music’s always been really important to me, but I only learned the guitar when I was 16, so writing music is only a recent thing. Me and a few mates wrote our first song together in college, but then I only started my own stuff a few years later. So it’s not really been a life long thing, just a very intense amount of writing the past few years which seems to have taken over my life.

I Love the charity shop angle, could you explain a bit more?

I absolutely love charity shops! Half my wardrobe is from charity shops. I think there’s something really cool about just going into a charity shop somewhere you’ve never been before and just having a look at what treasures you can find. My dad usually goes and finds the cheapest shirt he can with the highest retail price. He was dead proud when he got a £100+ M&S shirt for like £3, but it was pink, so he definitely only bought it because of the price. My thing is finding vintage shirts (without caring of the original price) like with interesting patterns, wacky colours, etc. I have far too many of them to be honest. But when I started out, a few bits of my gear was from charity shops, like pedal board, guitar, laptop, so it’s just ingrained in what I do I think. Charity shops and pop music. Charity Shop Pop.

I just love that, I'm so Mr Charity Shop! Have you got any album plans, and tour maybe?
​
I’m constantly writing new material, lately in a style which I haven’t really done before, but it sounds like something that could fit together in an EP if some sort, but that won’t be for a while. I have a load of songs I wrote at the beginning of all this which I really like, which have never seen the light of day yet, but they could form the basis of an album at some point in the future, we’ll see. Regarding tours, I’m still fairly new to gigging, I think I’m only on my fourth or fifth gig at the moment. So, yours would be a long way off, I feel like I need to work my way up through the venues of Liverpool first, which is going well so far. I’m playing the Cavern Club in December, which will be crazy.
​Are you from Liverpool?....There seem to be a buzz around Liverpool on the music front do you feel part of something or are you a lone wolf?
​
So I’m from Ormskirk, still live here, not escaped yet, but I say I’m musically from Liverpool, like, most of the gigs I’ve ever been to have been in Liverpool, I listen to a lot of Liverpudlian artists, I play my gigs in Liverpool. There is a certain buzz around Liverpool at the moment, I can’t put my finger on it, but I feel like, outside of London, from where I’m looking, we are constantly putting far more decent artists out there than anywhere else. And it feels really good even to be on the bottom step of the ladder in that scene. But, as I’m fairly new to all this, I wouldn’t say I feel ‘in’ yet. I was a part of the Merseyrail Sound Station artist development program, so I’m mates with a load of artists and industry people now which is cool, like, I’m playing gigs with some of them, and while they’re a bit ahead of me, it feels like we’re all growing together. I thing I’ve noticed a lot lately is how supportive everyone is, like you’ll play one gig for a promoter and they’ll support you and help you as you keep on going.
​ 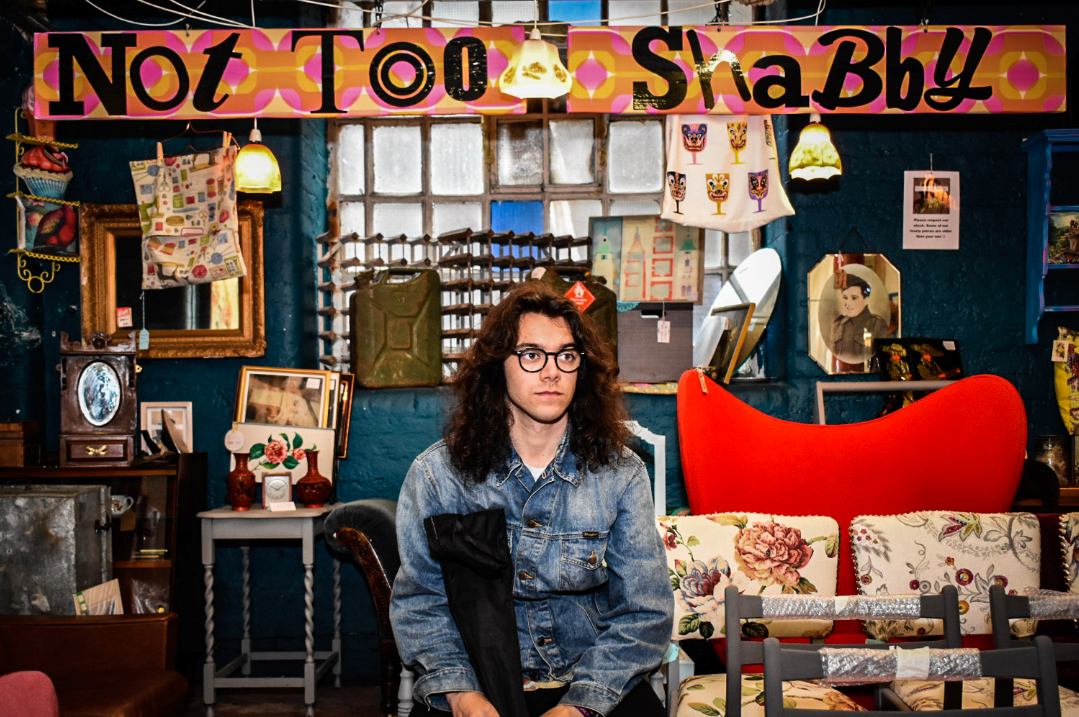 Pic Link - Phacemag Single Review & More Info
​Was it always music for you or did you have an interest in another art genre or other subjects...?

I’ve always had an interest in music from a listeners point of view, but only the past few years have I started doing my own stuff. At school and college I was more into graphic art, like making funky stuff on photoshop, which in fairness helps me when I need graphics for content or artwork, because I can keep it DIY, like the whole philosophy of my music. But as soon as I started writing music, I was like ‘this is what I want to do with my life’, so I’m at Edge Hill uni doing a music production degree. We’ll see where it goes, but, Charity Shop Pop is what I want to be doing with my life.

Thanks so much David .