​Gary Crowley
in Conversation with Pauliepaul

Below is just a fraction of Gary Crowley's CV, which surely confirms him as a full 'timed served' member and part of British music's cultural history - It was a pleasure chatting to him - paulie
On leaving school in 1978 Crowley took up a junior position at Decca records before joining the staff of the NME, taking over from Danny Baker as the telephone receptionist at their offices in Carnaby Street. At this time the weekly music paper was at the centre of the punk explosion under the editorship of Neil Spencer; Crowley was at the NME alongside writers Julie Burchill, Tony Parsons, Nick Kent, Charles Shaar Murray.

Crowley's knowledge of music attracted the attention of broadcasters and in 1980 he was hired by London's independent commercial station Capital Radio, and aged 19 became the youngest radio DJ in the UK.

Throughout the 1980s Gary Crowley became a prolific broadcaster / promoter, hosting regular club night at the Wag Club London (1981-1986)  and at Bogarts Harrow, where he showcased many prominent chart acts at early points in their career, including The Style Council, Bananarama, Wham!  and others. TV presenting followed, as Crowley was hired to front Fun Factory ITV on Saturday mornings and game shows including Runaround spin-off Poparound which ran through the late 1980s. At this point Crowley was presenting his an acclaimed weekly radio show The Magic Box on Capital Radio.

In 1994 he conducted the first TV interview with Liam and Noel Gallagher of Oasis (just prior to the release of Definitely Maybe) and later bought other Britpop bands to the show including Blur and Pulp. For the next five years  he interviewed acts including Björk, Manic Street Preachers, Henry Rollins, Massive Attack, David Sylvian, and other TV presenting jobs followed most recently with Rockworld TV. His radio show on the BBC station Greater London Radio continued to unearth new talent; Crowley was the first British DJ to champion new rock acts Suede and Bush.

You can hear Gary on Radio London - Saturdays from 6pm 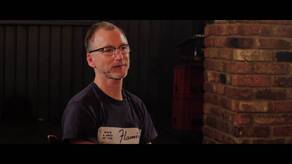 Hi Gary it's difficult to know where to start but because I started Phacemag can I ask you about  your fanzine?
How did that come about you were very young, am I correct in naming The Sex Pistols, The Jam, & The Clash to mention a few of the bands you Interviewed then. How did you make that happen? - Have you saved any copies? I also read that you sat in on a clash rehearsal session! - memories delux!

The fanzine was started Paulie through me and my school pals being galvanised by Punk. You either formed a band or started a band in 1977 and we decided to do the latter.
There was a phone box outside our school that I would commandeer at lunch times, ringing up the record companies and PR people and blagging interviews, records and tickets.
The name of the fanzine was 'The Modern World' which was named after a new Jam song at the time, who were one of our favourite bands.

Being in the centre of London (our school was just behind the Edgeware Road) meant that you would literally bump into people.
Whilst out one lunch time heading to our local chippy I saw  Joe Strummer from the Clash turn a corner and heading right towards me and i knew immediately i had to grab that opportunity to ask him for an interview. And luckily he said yes.
I think he was impressed with our enthusiasm and chutzpah and invited us down to a rehearsal to inteview the band the next day.
The stuff of dreams you could say! Joe and the band were always very encouraging and subsequently got me into a few gigs. Live in concert they were a revelation.
Steve and Paul from the Sex Pistols lived at the end of the road our school was in, so we would see them all the time.
I have a vivid memory once of coming home from the school and passing their flat and seeing the four Pistols (John, Sid, Steve and Paul) falling out of a stretch limo pissed.
I found out many years later from Paul that that was the day the band had returned from outside Buckingham Palace having just singed to A&M Records!
Paul Weller I got through to by default at his home and he immediately was welcoming and invited me down to Polydor Records the next day to  interview him.
From then on he always took an interest and was always encouraging.
I do have a few copies of the fanzine left somewhere. Time though alas has not been too kind to our prose!

I could listen to those stories all day Gary...
Along with the late great John Peel you have a reputation for championing new bands - Something I try to do at Phacemag, are you still sent lots of demos, or has it changed?

I've recently come off BBC Introducing in London so it has slowed up a tad but thankfully I still do get sent a fair bit of stuff which I love.
I still greatly appreciate having the outlet to play new music, I never take that for granted.
It's probably harder then it's ever been for new music to get to the surface. Everything is so fragmented nowadays and our  boredom thresholds are so small so bands/artists have to really want it and try harder.
I'm very excited about hearing the debut album form Hatchie. I've loved everything i've heard so far.

I'll put a preview link in for the new album, as recommended by Gary Crowley, there you've still got it Gary!
I think a couple of songs are released
​I often think that John Peel held the fort until the internet made it possible for new bands to get noticed - Were you mates, can we measure his importance?

I met Peelie when I first started as an assistant plugger. This would've been in 1979. He was God in my eyes! I used to listen to his night time radio show religiously and tape it on to cassette.
He turned me and thousands of others onto so many new bands and records for which I will always be grateful.
On meeting him he was everything you would want him to be and more. Perhaps a bit shy at first but always warm and and friendly.
We went out for dinner with him (always an Indian which he loved) a few times and he regaled me with stories of his past.
I didn't know until I met him that he'd covered the assassination of President John F Kennedy in Dallas and witnessed the press conference where Lee Harvey Oswald was about to be charged with JFK's killing.
He actually asked me if I wanted to accompany him as his assistant at his DJ gigs but when he asked I literally had just been given my first show on Capital so time wise it just wasn't possible.
I would see him on and off at various  festivals and gigs over the years and was always greeted with a warm smile and that lovely wry sense of humour.
I loved later in his career the Radio 4 Home Truths show which he presented. That showed another side of his immense talent.

I spoke to David Gedge about John Peel and he said if he heard the voice & knew John was in the audience his nerves would go sky high - or words to that effect...
Gary can I ask about you - any creative outlets - unfinished novels...

No book as of yet Paulie! But you never know as a wise man once said.
I have to say i've really enjoyed over the past couple of years compiling these two compilations Gary Crowley's Punk and New Wave (with my pal Jim Lahat) and Gary Crowley's Lost '80s for Demon Records.
Attempting with both to dig a little bit deeper then the usual collections out there.
With the sleeve notes i share a lot of personal memories and have asked friends like Richard Jobson, Clare Grogan, Duncan Reid, Jane Perry Woodgate and Spizz for theirs (for the Punk collection) whilst the likes of Clare Grogan, Gary Kemp, Annabella Lwin, DJ Chris Sullivan, Sean Mclusky, Bobby Bluebell, Nick Heyward, Bananarama, Gary Kemp, Beatrice Colin from April Showers and Toby Andersen from Funkapolitan shared some of theirs for the Lost 80s set. I think these have helped greatly to paint a picture of the times.
I have to say i've been so pleased with the positive reactions to both comps.
​
​Just going to take you back now - one word should do it Knebworth ...introducing was It Oasis? What - How? Were nerves at breaking.... must have been breathtaking?

My abiding memory of Knebworth on the Saturday that I compered is walking out on stage for the first time and seeing thousands upon thousands of people every where you looked. To say I was so nervous would be putting it mildly! I was literally building Pink Floyd's Wall in my underpants!!
One of the things that did calm me down was seeing a cameraman's face (who I knew through working on the late night music show I presented The Beat) pop around his camera with a big warm, cheery smile. That thankfully calmed me down.
The day itself was a strange one as you knew and felt it was an important moment in Pop history but the gig and Oasis's performance was underwhelming as expectations were so high.
I hear that the Sunday show was far better.

​Finally I love your show - you manage to combine that mix of old and new - and your alphabet has been a great source of entertainment - Can you share a favourite special radio moment - (don?t worry if not), Your prob going to be busy at festivals?  Do you still enjoy that festival sound or do you prefer a sweaty Dark venue - ?

If someone had told the 19 year old kid who presented his very first radio show on Capital Radio all those years ago that he'd still be doing it all these years later, i would've said two words. One about sex and the other about travel!
It's certainly been an amazing ride and hopefully one that will continue for a few more years. I still get that tingle of excitement when the red On Air light goes on.
A highlight radio wise has definitely been interviewing Paul McCartney a few times over the years. I was a massive Beatles nut just before Punk exploded, so chatting to him has always been special.
I've been to many festivals over the years (never to Glastonbury though which I almost wear as a badge of honour nowadays!) but give me a dark, sweaty club like the 100 Club or Social over a festival any day of the week.