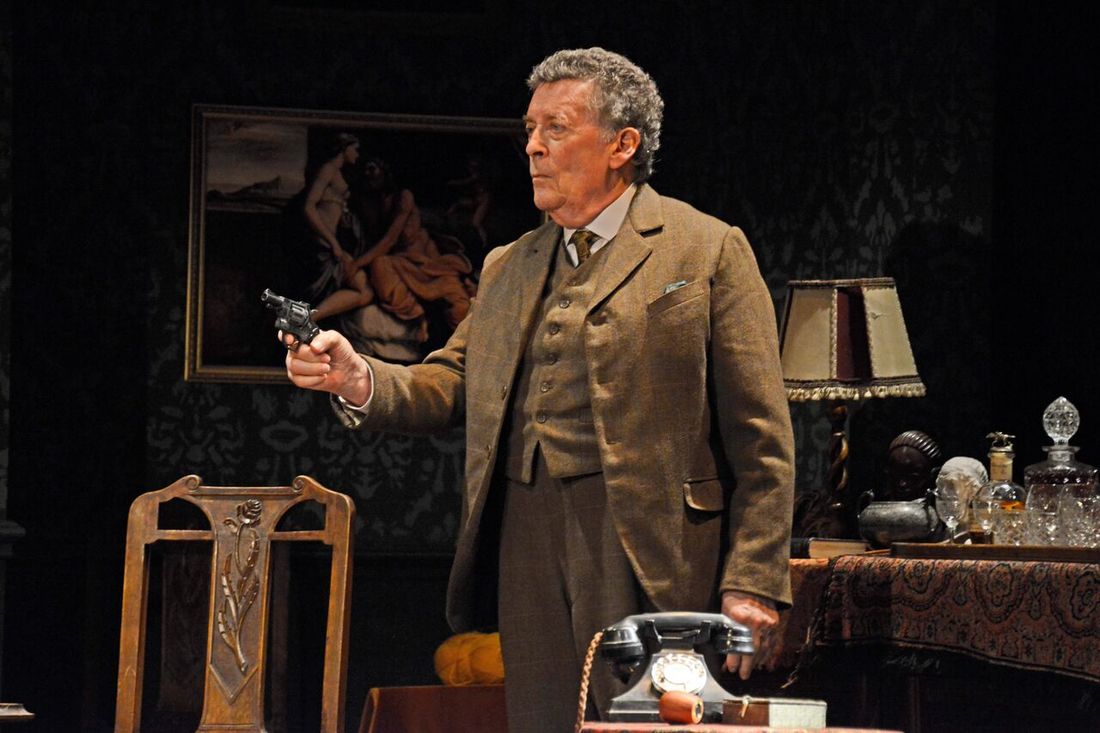 Full preview here - with more stills and production info -
We love Mikey, he's a bass guitar player in his band called Hallouminati who by the way have a new album out... watch this space! - Mikey has written for us a few times and we sent him along to review the Sherlock Holmes play for us -
Full production details, ticket info and stills from the play available - FULL PREVIEW HERE - or click on Holmes above.
pauliepaul 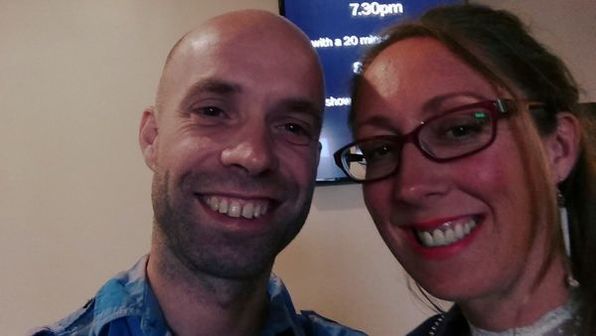 Mikey & Gina - click pic for Hallouminati Facebook -
​Phacemag Review – Mikey Cottle aka Miniature Dub
“Who is he anyway?”  I asked my mate Big Dave Jones after Sunday Dinner.
“He did Jesus of Nazareth mate!” Dave spluttered in amazement to my sheer ignorance of Robert Powell’s thespian talents.  In honesty I just didn’t know.  And it was Bill that pointed out he’d been in Tommy and The Italian Job as well.
“He must be alright then” I thought.
This made reviewing Sherlock Holmes, The final Curtain for Phacemag at Nottingham’s Theatre Royal an even more compelling adventure; and on the night there was a shared anticipation from me and Gina, a cohort of writers, reviewers, press people, and a near sell-out crowd of fans of the coke addled consultant detective.
The curtain drew to an older but still sprightly Dr Watson who was being introduced to the new technology of radio broadcast by a fledgling BBC. A reinforcement of Britishness and of changing times. On-going live, Watson our narrator, begins with only a brief moment of hesitation to tell the recent tales of Sherlock Holmes’ latest crime story.
I was instantly engaged, it was a real pleasure to be transported far from our digital day-to-day to a more refined19th century London. To be set on a journey of intrigue, murder, deception and intellectual examination with Holmes and Watson.
Thus begins a classic Sherlock Holmes narrative but having retreated into retirement Holmes seems paranoid. Dwelling in the boredom of his refuge, convinced that his enemies are ever present and that his nemesis Moriati wasn’t really killed in Reichenbach Falls.  It’s time for Holmes to rear his head again. To prove to himself that he hasn’t lost it?  To prove his innocence? Or just to do what Holmes does best?

We were treated to seamless scene changes, and fantastic sets which although at times minimal, enabled impeccable context for the narrative. Robert Powell, Lisa Goddard and cast delivered the eloquently written scrip with outstanding ability putting this crime mystery a good few notches above your average, whilst managing to retain an endearing humour and warm nostalgia to one of the best known fictional detectives ever created.
Containing a collection of charming scenes adeptly presenting all things expected from a Holmes and Watson escapade, The Final Curtain was by no means predictable and the audience were all pleasantly appreciative when it came to 'Holmes’ clever – who done it – big reveal.
​
We had a great time, and I even learned two new words: necromancy and perspicacity.  It was wonderful to watch Robert Powell go – there’s a real prowess to his delivery.  The excellent applause filling the Theatre as the cast took their bows was testament to this.
Worth going to see for sure – Holmes fan or not!
MIKEY COTTLE aka Miniature Dub
google.com, pub-1336815800049544, DIRECT, f08c47fec0942fa0