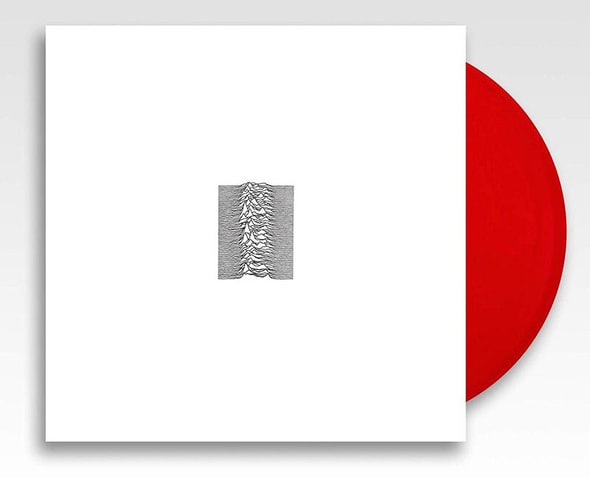 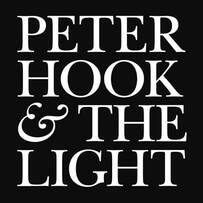 Hello Peter, firstly how important were the Sex Pistols in influencing Joy Division in the seventies?

I think they inspired us, not musically, but in how they were. They represented punk, the embodiment of not taking anything from anyone. They were part of the movement.  It was the attitude, the belief in yourself. That was what we felt punk was. They didn’t last long, did they? That’s how it is with a lot of bands. If you’re talking indie bands, I think New Order were probably the most successful. But I went to buy a bass after the Sex Pistols gig. I went to a music shop in Manchester. I’d never played an instrument before twenty years old. So, I went to the music shop and asked for a bass guitar. I wanted to play one in the band,but didn’t really know what one was. I was asked “what one do you want?”. I said “a bass guitar”. So he showed me one and I said “it only has four strings” and he said “that’s what a bass is, you knob!”

There’s a powerful punch heard on opener Disorder. Was that punch intended as a transition from live sound to album?

We recorded everything live. We all played in the studio and Ian did the vocals. Closer was very different, we started overdubbing instruments which we’d never done before. But here it was all done as we played in the same place. Martin Hannett made it all sound ethereal,magnificent,he gave it that sound. He was fantastic, Unknown Pleasures still sounds as great forty years later. Barney and I learned a lot from him, and we later stole from him too when he became too difficult to work with. And he really was difficult to work with later on, he was doing a lot of drugs. And we later went down that road, but we weren’t on that trajectory at that time! My daughter’s going to the Parklife Festival in Manchester, and hearing these things from your daughter, you think “oh shit”. These things come back!

She’s Lost Control and Wilderness are two prime examples of pristine powerful, palatable bass parts. Were you conscious that the bass melodies would be an integral part of the band’s trajectory as well as the underrated Freebass?

It’s very nice of you to say that about Freebass. I think the problem with that was too many chiefs. It was me, Mani and Rourkie, all of us out of groups, all of us wanting to do our own thing. We did one sell out tour that I am very, very proud of, then we called it a day. As for Joy Division, I was never a fan that the bass player was the quiet one in the band. I’m quite big-headed, as me mother might say,  if you excuse the expression [laughs]. It all came about because the equipment Joy Division were using was so dreadful. It was hard to hear the stuff.  Bernard was playing his stuff so loud. So, the only way I could be heard was by playing high. I learned to play high on the bass and Ian Curtis loved it. He loved the sound. He used to tell me to play that stuff. So, that became a signature for the sound. Barney told me once, and only once, and asked me could I just play what the guitar was playing? I was never into that and thought why couldn’t he just play what I was playing? Anyway, that was the only time he asked me, because I said no to that. 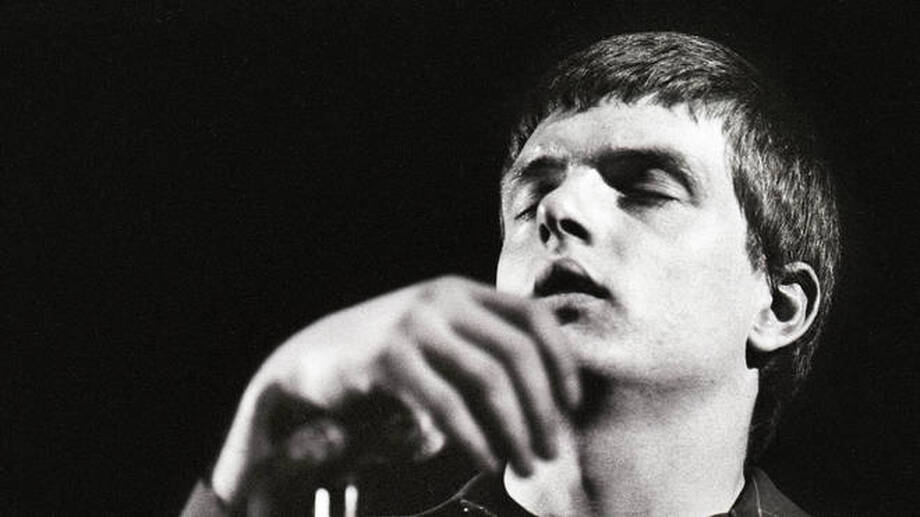 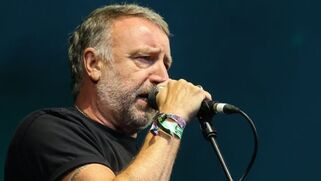 Curtis, abstruse and idiosyncratic in lyric, showed a precocious talent with wordery. How do you find his lyrics hold up?

Ian is fantastic. Just fantastic. It’s only when I started writing lyrics again, I realised how hard it can be. Ian made it all seem so effortless! I’m doing an orchestral version with the band and we went through the lyrics only yesterday with some of the singers. They were just amazed by the words. Incredible. I couldn’t always hear what Ian was singing onstage, but I knew he had gravitas and passion, because the audience were really involved. You could hear the response. It was only years later I got to know the words. It was all fair in Joy Division, we all wrote our parts equally.The only thing we couldn’t fight was Ian’s illness and depression. I live everyday with Ian’s suicide. In many ways, it’s a selfish thing to do. I know many people, family members and friends, who have gone the same way. I hope you and I don’t find ourselves in that situation. It’s easy for the people who go, they’re gone, it’s the people left behind who suffer. But Ian’s work is great. Of course, New Order were the more commercially successful band, and Joy Division earned their place more so in the nineties. Reading Ian’s work, it was like reading a novel, a great writer, a great talent. Interesting with these Manchester writers. Ian Curtis, Ian Brown, Mark Smith. Uniquely brilliant, so different but so good.

The fiery Interzone exalts an exhaustive display of ghostly vocal weavings. How did you find singing this track off of Ian Curtis?

I did sing on that one. Ian was the most generous frontman I’ve ever met, and I’ve met my fair share! In the early days, I was doing a lot of writing, but when Ian came along and showed what he could write, I felt like a kid to him. He really could write them, so I ended up leaving him to do it. Of course afterwards, without Ian, Steve was very helpful writing the melody lines for songs like Procession. When Barney started more of the words, then Steve stopped, as did I. It was later that I started writing the words again. But it took us a while in New Order after Ian left. But Ian was always very encouraging to me and told “you should write more Hooky”. I wasn’t so sure, but for this song, he said you sing it and he’d do a sort of Q and A thing on the track. Incredibly generous of him. Funny thing is, the one person who didn’t sing at all in Joy Division was Barney, who became the lead singer of New Order, which I don’t really know how that happened. [laughs].But when we went into New Order, when Ian disappeared, it was clear that if Steve and I continued that sound, we could keep it going. It was Rob Gretton who told us that. Barney and Gillian could add to the songs. Gillian would play what she was told, Barney showed her the parts, on the keyboard and the guitar, she was more of a session man, session woman, than a writer. And that’s how we came up with the New Order sound.

What do you think Martin Hannett brought to the record and to the band?

All I can say is thank God he didn’t listen to us, because he really brought our sound! We didn’t know how to produce. He didn’t write the songs, mind you, but anything was fair game to him. Did you see the Bohemian Rhapsody film? Where everything’s upside down on the speakers? That was Martin. Nothing was off limits for him. He was a genius, a troubled genius, sure, but he was a genius. So, he’d be up for anything. We actually recorded Stephen playing on the roof, we tried it. Drums don’t work without faders, so we used it in the studio. We didn’t leave him up there like 24Hour Party People, that was a bit of artistic licence from director Michael Winterbottom. Martin would happily rocket my bass to space to get the right sound [laughs]. He’d smash cups, we actually recorded in the wilderness to get the sounds. Always open for anything. He had vision. Everyone’s working from a computer nowadays. The sounds are from YouTube. Everything’s searching within a computer. Back then, we had to physically search for a sound. And when you listen to these older albums on vinyl, they sound so much richer. Because we had to work for them.
I know on the night what we expect to play. If they’re wearing Unknown Pleasures t-shirts, it’s Joy Division, if not we go New Order. And while we don’t have a relationship, besides a bitter one, I think Stephen, Barney and I made a fantastic record with Unknown Pleasures. I really think we all did. But it’s all part of life. We weren’t the first band to go through all this and we certainly won’t be the last. ​​
You’re touring Ireland and the U.K. during the summer with The Light. What can fans expect of these shows?

I play with the honesty and the gravitas that I’ve always played. Though we got some complaints at the beginning, we haven’t gotten many since then. We play as we always have. It was Ian’s greatest wish that we went out and were heard. I’ve played Slovakia, Brazil, Mongolia, with Ian’s music. As I said, New Order were once the more popular group, but now I think it’s “Even Stevens” with Joy Division. I remember when I played the Warsaw track years ago, it went down a major storm. I did a gig in Italy recently where I found five Joy Division tribute albums, which I didn’t know about. Given that Joy Division were only professional for six months, we did a lot of good and changed a lot of people’s lives. Next year, I’ll be out playing Unknown Pleasures and Closer to celebrate forty years of Ian’s life. And there’s the Orchestrated versions of the songs which I’m doing right now. No one’s heard them, so that’s a bit freaky. So who knows, maybe I’ll be playing near you with an orchestra!

Commemorating four decades of the group's and Ian Curtis continuing influence, Peter Hook & The Light are to perform two special concerts - Joy Division : A Celebration at 02 Academy Brixton and 02 Apollo Manchester in May 2020.

For the first time in the UK since their sold out Camden Roundhouse show in December 2017, both shows see them play 'Unknown Pleasures' and 'Closer' in full plus singles and B sides along with an opening set of New Order material.
These Joy Division album shows have become much less common for The Light as they move through their progression of touring the New Order albums in succession since 2012. Aside from some one-off gigs such as The Roxy in LA and Manchester Academy, these are the first major shows to be announced for this set in some years.

​In addition to coming some forty four years since Joy Division formed, these gigs also mark ten years since The Light began at The Factory in Manchester on 18th May 2010. That journey has seen them now perform eleven of both his bands albums all round the world including numerous tours of North and South America, Australia, New Zealand and the Far East.
Tickets on sale Friday 26th April 2019 at 10AM.
Brixton - http://bit.ly/TheLightAcademyBrixtonMay2020
Manchester - http://bit.ly/TheLightApolloMCRMay2020
The charities to be supported by the concerts are CALM and Epilepsy Society. 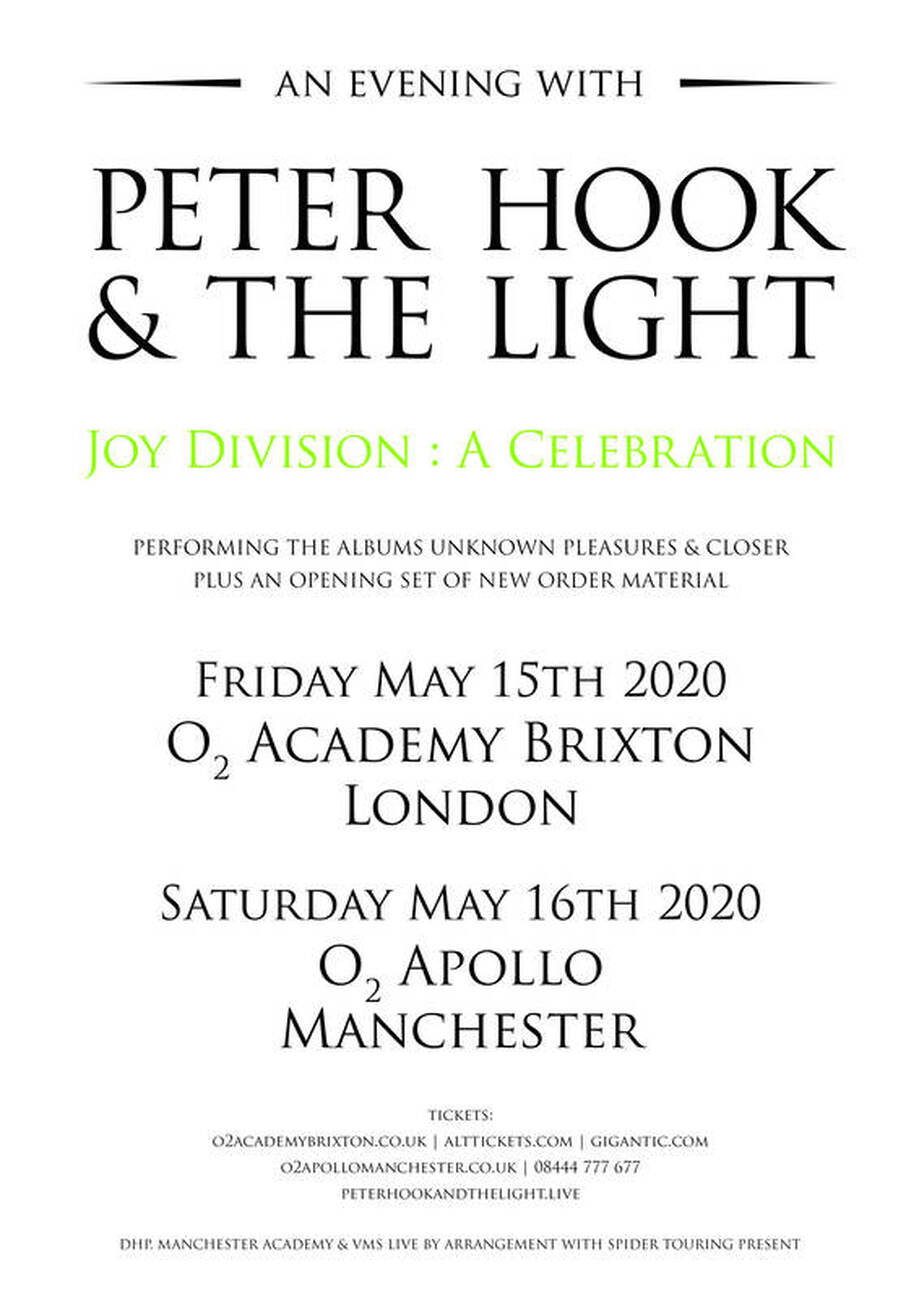