I've Got a feeling this new album is very Special
& reading the quote from their website
(below) and rightly so do they!
Like experts in making perfect pies
Getting together to make the perfect pie!
Race horse owners entering a thoroughbred
into The Derby at the peak of it's fitness!
​ok I did get bit carried away there
Seriously folks I love what I've heard
I love the Dylan esque 'Hotel Last Resort'
And if this album was a horse or a pie
I'd be on my way to the bookies
or ​The pie shop!
pauliepaul
​ 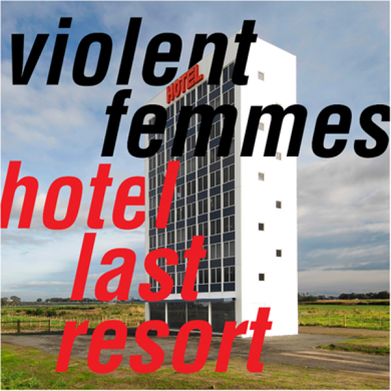 The groundbreaking band’s tenth studio album, HOTEL LAST RESORT resides among Violent Femmes’ finest work, simultaneously refining / redefining their one-of-a-kind take on American music, mingling front porch folk, post-punk, spiritual jazz, country blues, avant-garde improvisation, and golden age rock ‘n’ roll. Founded and fronted by Gano and Ritchie, the group remains as warm, wise and weird as ever before, with new favorites such as Another Chorus and Everlasting You continuing to mine the vast range of ideas, melodic complexity, and organic sonic craftsmanship that has characterized the band’s body of work since their landmark 1983 debut.

Violent Femmes have released nine studio albums and 15 singles during the course of their career. The band found immediate success with the release of their self-titled debut album in early 1983. Featuring many of their well-known songs, including "Blister in the Sun", "Kiss Off", "Add It Up" and "Gone Daddy Gone", Violent Femmes became the band's biggest-selling album and was eventually certified platinum by the RIAA. Violent Femmes went on to become one of the most successful alternative rock bands of the 1980s, selling more than 9 million albums by 2005. After the release of their third album The Blind Leading the Naked (1986), the band's future was uncertain and they split up in 1987, when Gano and Ritchie went solo. However, they regrouped a year later, releasing the album 3 (1989). Since then, Violent Femmes' maintained steady popularity, especially in the United States, where the songs "Nightmares" and "American Music" cracked the top five on the Modern Rock Tracks chart.
​