Available April 3rd and pressed on 180-gram vinyl at RTI, the acclaimed title includes such tracks as “One Week Last Summer” (which received the 2008 GRAMMY® Award for Best Instrumental Pop Performance), and an updated version of Mitchell’s iconic 1970 track “Big Yellow Taxi.”
This is brilliant I l've loved Joni Mitchell since, well since. (my fav song 'Last Time I Saw Richard' from my fav gorgeous love it album below!) I must admit this album (Shine) went unnoticed by me when it came out. I'm making up for it now!  Best pp

The 19th studio album from Mitchell, Shine marked the legendary Canadian singer-songwriter’s first collection of original material in nearly a decade, and came as a welcome surprise to the artist’s fans, following her well-publicized break with the music business at the turn of the millennium. Described by Mitchell to be “as serious a work as I’ve ever done,” Shine was inspired by the environmental, social and political turmoil which plagued the era of the Iraq War

The cover art on Shine is inspired by the 2007 ballet, Dancing Joni: The Fiddle and the Drum, a collaborative effort between Mitchell and choreographer Jean Grande-Maitre of the Alberta Ballet.

The 10 tracks on the album echo Mitchell’s pensive mood—reflective lyrics and beautiful, often-minimalist, piano-driven melodies paint a somber, yet hopeful picture. Highlights include the instrumental opener, “One Week Last Summer,” featuring the versatile multi-instrumentalist Bob Sheppard on soprano saxophone; the epic “Night of the Iguana,” loosely based on John Huston’s 1964 film; the title track, featuring an appearance by longtime friend James Taylor on guitar; Mitchell’s revisit to “Big Yellow Taxi,” which feels eerily prophetic 50 years after its debut, and “If I Had a Heart,” which the New York Times described as “one of the most haunting melodies she has ever written.” 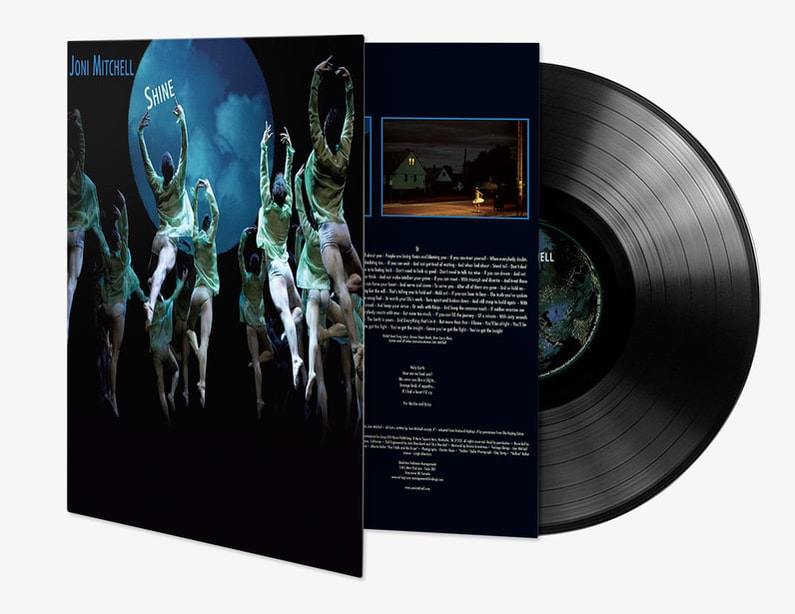 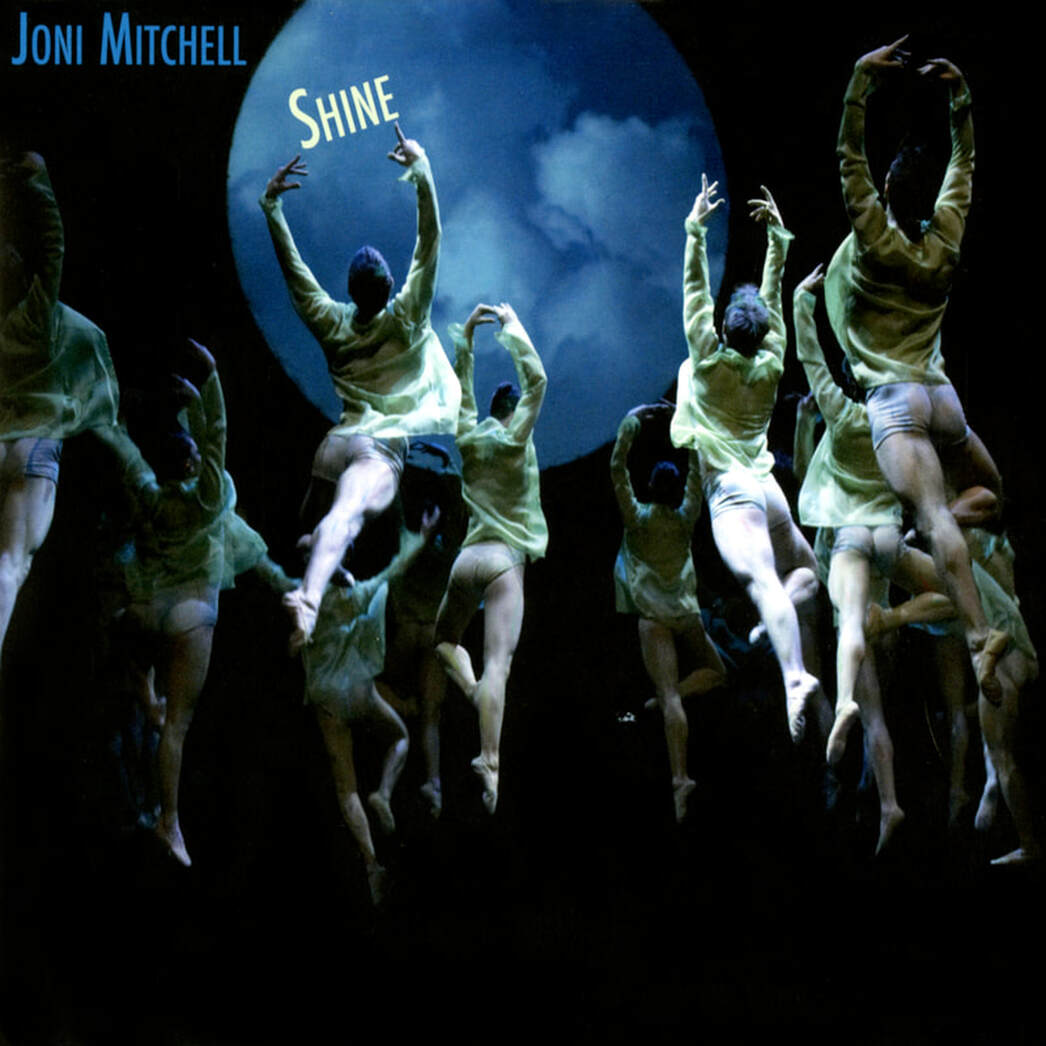 Stream
The cover art on Shine is inspired by the 2007 ballet, Dancing Joni: The Fiddle and the Drum, a collaborative effort between Mitchell and choreographer Jean Grande-Maitre of the Alberta Ballet. The performance was set to 13 of the singer-songwriter’s more provocative songs, and lit by a backdrop of Mitchell’s artwork—specifically a series of photos she took of her malfunctioning flat-screen television set (several of these images were included in a triptych book on war, torture and revolution, and later featured in art shows in Los Angeles and New York). The Fiddle and the Drum inspired Mitchell to release her long-awaited new album. “The ballet brought everything together—the poetry, the music, the artwork,” she says. “It was the thrill of my life.” Three songs from the ballet (“If I Had a Heart,” “If” and the “Big Yellow Taxi” redux) are included on Shine.

Upon its release, Shine received an enthusiastic critical reception: the Chicago Sun-Timespraised the album as “a welcome evolutionary step,” adding that Mitchell offered “the most grace of her career thus far.” American Songwriter called it a “somber, but non-sanctimonious masterpiece that balances dark sorrow with orchestral exultation,” while the BBC declared Shine“one hell of a comeback.” The commercial reaction was equally as positive, proving Mitchell’s enduring prowess as a musical force: certified Gold by the RIAA, Shine sold nearly 60,000 copies worldwide in its first week, and debuted at number 14 on the Billboard Top 200, marking Mitchell’s highest US chart position since her 1976 LP, Hejira. 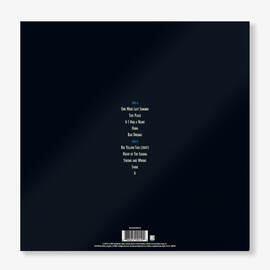 Pre Order Vinyl
Hailed as one of the most influential songwriters in musical history, Joni Mitchell defined a generation in the late ’60s and ’70s with her poetic, introspective lyrics and her genre-defying blend of folk, jazz and pop. Born Roberta Joan Anderson in 1943, Mitchell began her career as a performer in the mid-’60s Toronto folk scene, before relocating to the United States and famously settling in Southern California. As her reputation grew on stage, Mitchell was also becoming a hot commodity as a songwriter—many of her compositions gaining success through other artists’ recordings, including Judy Collins’ 1968 cover of “Both Sides Now,” Fairport Convention’s rendition of “Eastern Rain” and Crosby, Stills, Nash & Young’s hit version of “Woodstock.”

Over the course of four decades, Joni Mitchell released more than 20 albums, including such standouts as the deeply confessional, groundbreaking Blue (1971), the double-platinum-selling pop record Court and Spark (1974) and 1976’s jazz-oriented masterpiece, Hejira. Mitchell has won eight GRAMMY® Awards and received a GRAMMY® Lifetime Achievement Award in 2002. She was inducted into the Rock & Roll Hall of Fame in 1997 and was ranked ninth in Rolling Stone’s 2015 “100 Greatest Songwriters of All Time” list.

​2/ Clouds - Everything Joni Mitchell Has Ever Done About Clouds 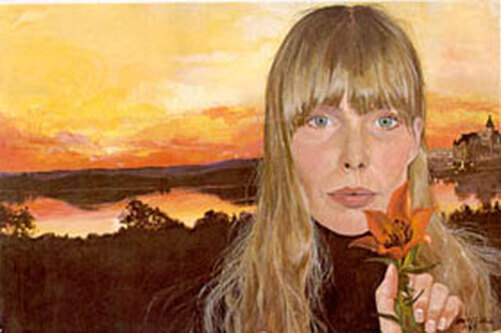 "This was an exercise in observation, a portrait done from a mirror over a period of a couple of weeks. During that time, I noticed how much a face changes according to sleep and the tension of the day or lack of tension. Sometimes my lips would be fuller and I would paint them as I saw them, then the next day the tension of the day would thin my lips out and i would look at the painting and it would seem wrong. The same thing happened with my eyelids; they would fluctuate from being very full to the crease and very thin to the crease. So over a period of two weeks it was a general representation of the thickness and thinness of my face." Bryan Keelan writes: In the background, is the Bessborough Hotel in Saskatoon Sask. Joni holds a prairie lilly, the Provincial flower of Saskatchewan
share
google.com, pub-1336815800049544, DIRECT, f08c47fec0942fa0