Salad's new album 'The Salad Way' will be released August 30th 2019 on CD and digitally.
​There will be a standard vinyl version and a highly covetable limited edition yellow vinyl version.
​The Salad Way can be pre-ordered here https://salad.tmstor.es/

Salad were formed in London, England in 1992 by Marijne van der Vlugt, Paul Kennedy, Pete Brown and Rob Wakeman. They released their hit debut album Drink Me in 1995 featuring singles Drink the Elixir and Motorbike to Heaven. Follow up Ice Cream (1997) was produced by Donald Ross Skinner, with Charley Stone joining as a live member in 1996. The original Salad parted ways in 1998 but made friends and returned in 2017 after Paul and Marijne started writing together again in 2016 and recorded an album with Donald under the name Salad Undressed. The current line up of Salad is: Marijne van der Vlugt (vocs/keyboards), Paul Kennedy (gtr/vocs), Pete Brown (bass), Charley Stone (gtr/vocs), Donald Ross Skinner (drums).

​The Single
'Under The Wrapping Paper' is out on iTunes and Spotify etc. 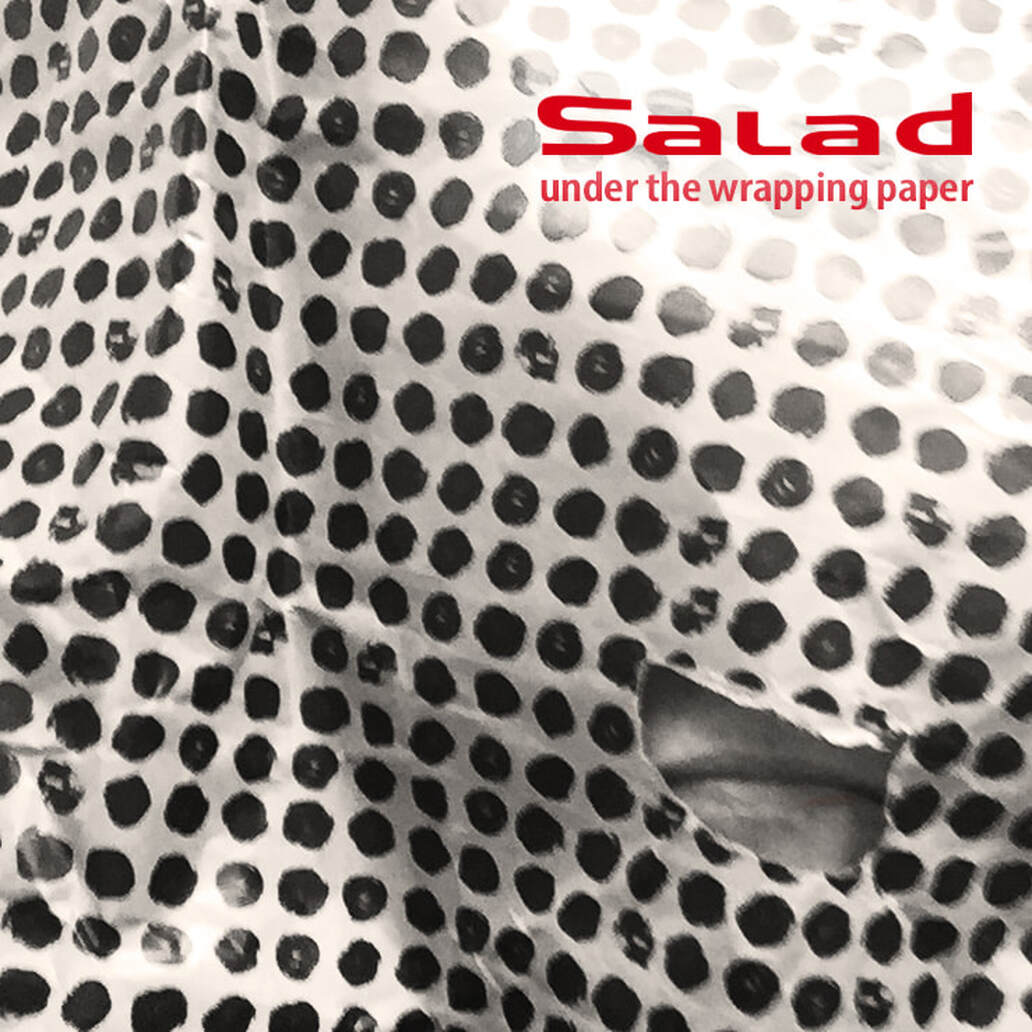 Single Cover Link - Salad.com
​Under The Wrapping Paper comes at you like a relentless post-punk stream of consciousness with a cheeky Motown beat. Marijne’s ‘conversational’ vocals are marinated with searing guitars and throbbing bass, with some impressionistic piano occasionally creeping in and out,  from under the wrapping paper, of course. What else is under there? Fear, paranoia, guilt and denial. It’s time to expose what we are sticking in the sand, and shoving under the carpet, or indeed, under the wrapping paper. It could also be a gift, a secret, something shameful, or something we'd rather not think about...
The idea for the song came to founder member and guitarist Paul Kennedy in a rush of inspiration one day as he popped out to buy a cheap T-shirt.
“I worry about child labour / But I needed a T-shirt  / Put it in a paper bag / You can recycle that later” 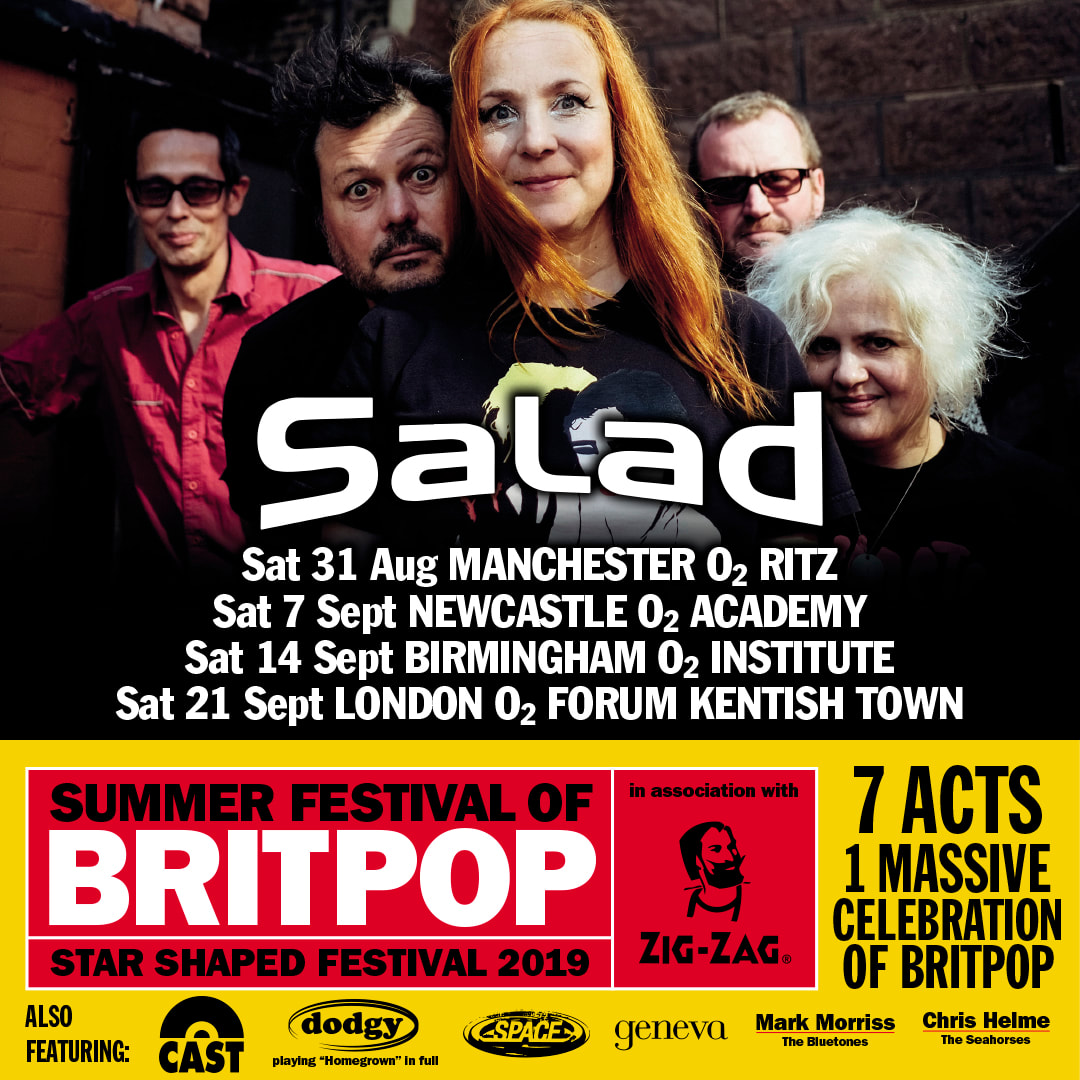 Hi Marijne congratulations on the finished album! Was it an easy album or did it fight you?

It was an easy album actually. I mean there were fights and disagreements amongst a few of us, but this inevitably always delivered the magic in the end…
We found an amazing co producer, Gordon Mills Jr, and after a lot of preparation we went into his studio and nailed the album in 15 days flat. I am editing a ‘The making of The Salad Way’ video at the moment.
We thought we’d had all the tracks we wanted to record about 1 month before going into the studio, and then one by one new songs started to make their appearance, like Under The Wrapping Paper, so good and fresh they could not be ignored, so we elbowed them in and the result is a wholly living and breathing record that came about in a time and place where the 5 of us (6 if you include Gordon) were all on the same page. Quite nice really.

Do you get involved with production

Yes very much so, it was complete team work. Gordon works very fast, he knows how to get the right sound out of a vocal, an amp, a drum kit, and then is a wizard on protools, he doesn’t faff, it’s dream. That offered us lots of time to try different things, and some songs weren’t ready yet on the day we were recording them, so lots of space for last minute creative changes. He also was able to turn a blind eye if tempers flared…he’s used to it
I will say though that no one has ever recorded my vocals as clearly and beautifully as Gordon has. He the man.

Is recording producing releasing vastly different from earlier in your career?

Yes vastly.
Regarding recording & producing, the main thing is that now there is less money pumped into artists, so you do have to be frugal and creative decisions get made faster, there’s more thinking on the hoof which keeps the music alive
And with that comes complete creative control, which I wish we'd kept and had had the courage to keep in the 90s a few years after being signed.…big money gives you the illusion that the people giving it you know what they are talking about…they don’t…Also with technology having changed so much, everything is faster, communication is instant across the globe, mistakes can be rectified, ideas can be tried and tested, there is unlimited choice with what you want to try, however, you still need to be frugal with your ideas, because unlimited choice can also be stressful, and doesn’t necessarily create good art.

Regarding releasing it’s also hugely different. We started out in 2016 doing a kickstarter project, as about 10 years ago that was a new way for artists to fund their releases and tours, funded by their loyal fans, but the kickstarted model has been abused sadly by one company, namely PledgeMusic, and now we have discovered something called Label Services, where you basically provide all the creative content and the Label Services will fund that particular project, including the promotion and manufacturing, they have all the knowledge of the music industry as it works now in the digital age and support the artist, but unlike the record & publishing companies of the past, they don’t own your recordings or publishing. It's a win win situation. So far so good. It’s better and safer for the fans too. We work with Republic of Music, based in Brighton.

And you must be excited about the tour…!

Very much so!!! Having done this tour 2 years ago as an acoustic 2 piece when we opened up the proceedings on each of the festival dates, we can't wait to rock the venues with the full blown electric Salad. We know a lot of the bands on the bill already and can't wait to make friends with the rest, like Cast and Geneva. It is always a well oiled yet civilised party back stage. But I am most excited about playing our classic songs from the 90s plus 2 or 3 from our new album to the people coming to the Starshaped Festival, they know how to have a good time, it rubs off.

I'm excited for you! I missed your show last time so I'm determined to see you play live soon, thanks so much ….
pauliepaul
​
share