Jack sent me these to republish, every word a delicious incite into life for him on tour with Peter - pp 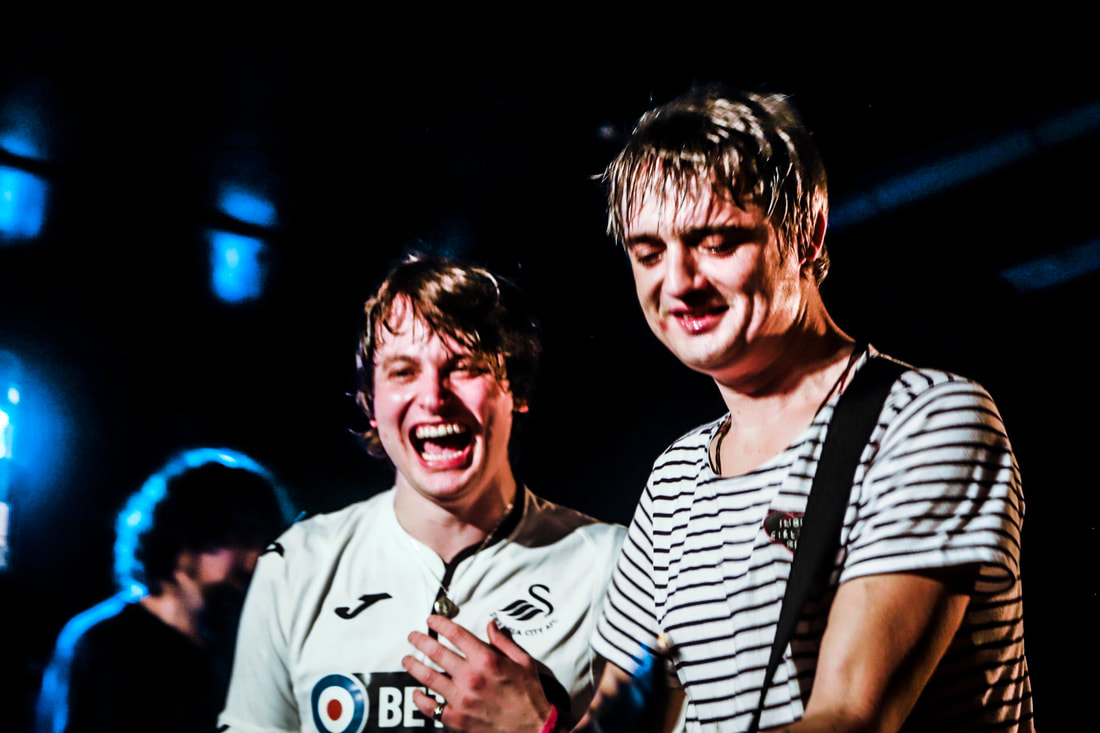 Well we are in Margate now and happy birthday to me… My first present to myself is a hangover - not the best gift ever, But I had spent the whole night talking the ears off Peter’s manger Jai, and I suppose that Jesus and the church bells weren’t going to let me off, just because it was the anniversary day I turned up on this planet. I woke on the bus in the comforting arms of Iain Slater the soundman.
I spend the day with Peter in a kind of fashion and guitar marathon. We tried on outfits as radical as we could while singing what ever came into our heads. It cured the hangover and was quite a sweet way to spend my birthday.

Our collective genius came up with some unforgettable classics that neither of us can remember. Chad our new guitar/merch man made me avocado on toast. And this saved my mind from falling into that black abyss that oceans of gin can induce. Thank you mate.
Peter and I walked the dogs on Margate beach, the sandy shore reminding me of home and the dogs reminding me of my dog Luna. When will teleportation be invented? To ignore how much I miss Luna I hurtle myself into the cold water. Soaking my shoes and socks and clothes and face. I didn’t really think it through though. I didn’t bring any spares and they remain wet for a week.
The gig is in Joe’s Yard. The strangeness of the venue lends itself jarringly to the bright neon lights that are behind the stage. It all culminates in a mirage that wouldn’t be out of place in what I imagine Las Vegas is like.
The fans are on form tonight. A blanket of recognisable faces stare back at us as we take the stage. The lights shimmering over them reminding me of their presence and the party begins.
‘The Last of the English Roses’ plays its last note and the noise from the humming shimmering lights and crowd is deafening.
Keeping with the Vegas theme Peter sings me happy birthday in his best Elvis tones and the day is complete…. surrounded by friends. What more could I have asked for? Maybe a Electric scooter and a hangover cure - but you can’t have everything.
Back at the bus we find the king of treats. An enormous two-meter sausage and some beer for the dogs. I don’t know whose happiest Narco, Zeus, Peter or me? If we had known that later in the evening one of them would do her business on Miki’s bunk while she slept, we would probably have thought twice.

Oh just and just before the day closes Peter gives me a present...an electric scooter...guess dreams do come true...

Miggles and I are becoming the kings of Fifa. Apparently there has been a PS2 with Fifa on every tour bus we have been on, but this is the first time we've noticed it. If you told the teenage me that one day I would be playing Fifa on a rock band tour bus during the daytime I would have stood and laughed at you. Some dreams do come true, again.
Any way it's Swansea vs Marsaile. He is ever the artist and I am ever the
pragmatist. He only scores amazing volleys and elaborate team goals, whereas I score the kind of scruffy English goals that mean you always win.
I think though mine is an effective strategy. Miggles plays what you would truly call total football.
It was finally the day for showers. And I cannot remember the last time my skin felt water, apart from the salt water in the Margate sea. Some where in the frenzy of life on the road I had lost my wash bag and my dental hygiene had plummeted.
Even the glory of a shower was a messy affair though. I went in after Rafa and may as well have had a mud bath.
Things did improve as we are taken to sample the delights of Derby by the one and only Greg ‘The King of Computer Games’ Thomas. The food was so good it was like a distant memory of something beautiful. And a good omen up for what was to come.
Walking onto the stage we were met with beers and cheers.
One of the beers found its way in to the vibrations of my guitar. I had to stand around trying to look cool for the first few songs while it dried out. I was trying to play, but my fingers kept slipping and playing wrong notes. A bit of nightmare to be fair.
But it was all ok when I looked past the beer and saw the crowd. There were friends there shouting my name and ‘Alcohol Kiss.’ I love and thank you, but this is definitely Peter’s show and I don’t want any echoes leaving shadows in his mind. This is certainly not a tramps gig (especially since we had showers that day haha).
People shout out for Libertines & Babyshambles songs too. But tonight it’s Peter’s spotlight. His own world. Let him do his thing and be there to witness it…there is no one better.
Love as ever

Peter and I have just walked his dogs for hours. God knows where we are. Or is it that the dogs are walking us. Zeus has dragged me through a field for what feels like 100 miles and we are lost somewhere in the hills of Northwich (if Norwich has hills).
Never say never, or something along those lines. But I thought we would never play in a bingo hall - play music that is, not bingo.
I thought bingo halls were for the very old and the people who came with them. How wrong can one person be? What a beautiful venue! This was going to be a great laugh. The crowd was full of a spectrum of ages.
The good people of Northwich piled out of the show and onto the concrete outside. Peter played songs by our portable home…the bus.

We all draw pictures of our mascots the wolfdogs. And Peter signed it and gave it to a fan. Apparently it ended up on Ebay later for £200. I never imagined my drawing skills would fetch that much.
The venue looked exquisite. But the sound was echoing was ricocheting off the walls, and bouncing into itself on the way back. And the lights were so random that we were left blind and deaf on the stage.
Now if you have every played a gig, or in fact participated in any group activity, you will know that not being completely unable to hear or see anything you are meant to be doing is a bit of a disadvantage. We were unable to communicate on the stage and the tension grew, but we carried on and thought we made a good go of it.
I was left disjointed and jangling. It felt like the sound was against us, but the people and the occasion were amazing. God if only there were more people like the people who own the place. They gave us a night to remember, for reasons I can no longer remember. We will have to go back with a different set up, I think, and give the people of Northwich a show they deserve.
The evening strolled in. Darkness was welcome. And as I lay there in my bunk dreaming of showers and toothbrushes, I was hopeful that the next walls we played within would be kinder to us, and to the fans, but for now...I’m blissfully tired enough not to worry.
Love as ever