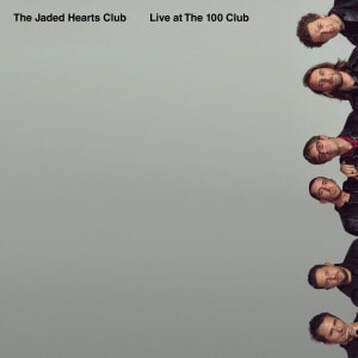 ‘Live At The 100 Club’ was recorded at the band’s first London show. Organised in memory of guitarist Jamie Davis’s late father, the gig sold-out immediately. The album will be released on digital formats and is available to pre-order and pre-save HERE. It follows a previously released limited edition vinyl pressing of the album. All proceeds from both the show and the vinyl edition were donated to the Shooting Star Children’s Hospices.
Jamie Davis formed The Jaded Hearts Club when he called upon some old friends to form a band to play a Beatles set at his birthday party. Their second gig was at Stella McCartney’s fashion show in Los Angeles, where Quincy Jones, Katy Perry, James Corden and even Ringo Starr were in attendance. Paul McCartney strolled on stage, winked at Davis and led the Hearts through ‘I Saw Her Standing There’ and ‘Helter Skelter’. In the space of just two gigs, The Beatles covers band had effectively become the surrogate Beatles.​

Jamie Davis and Matt Bellamy later decided to develop the band further and started working on an album, with Bellamy producing at Red Room Studios in Los Angeles. The band decided to focus primarily on recording lost classics from the world of Northern Soul, supplemented by their raw, soulful takes on some famous standards from the era. The duo shifted through 3000 songs as they researched what material they should record. The result was their debut album ‘You’ve Always Been Here’.
Spotify
Apple Music
Instagram
YouTube
Facebook
Twitter
share
​
google.com, pub-1336815800049544, DIRECT, f08c47fec0942fa0