My younger brother Jamie took me to see Carter USM in the mid 90’s. They were supported by The Sultans Of Ping and I was hooked from the first “You Fat B******d”
Jim Bob met Les (Fruitbat) in the 70’s, but Carter USM were really born in 1987 after Les joined Jim on stage playing bass  to a backing track. Oh joy I have just been corrected by Les Carter no less! It was Electric Guitar! THANKS LES! (Sorry about that)
The band went through various incarnations and had varied success, I've put a link to the book (pic link right) that Jim wrote on the band's roller coaster Rock & Roll ride, which Is a fascinating insight.
The band played an astonishing 800 or so gigs and released 4 top ten albums. Carter USM had a great range of merchandise at their gigs and the fans were easily on a par with Smiths fans in the fanatic stakes!
After the band split, Jim started writing the aforementioned  'Goodnight Jim Bob - On The Road With Carter The Unstoppable Sex Machine' which was published and led to a series of novels. 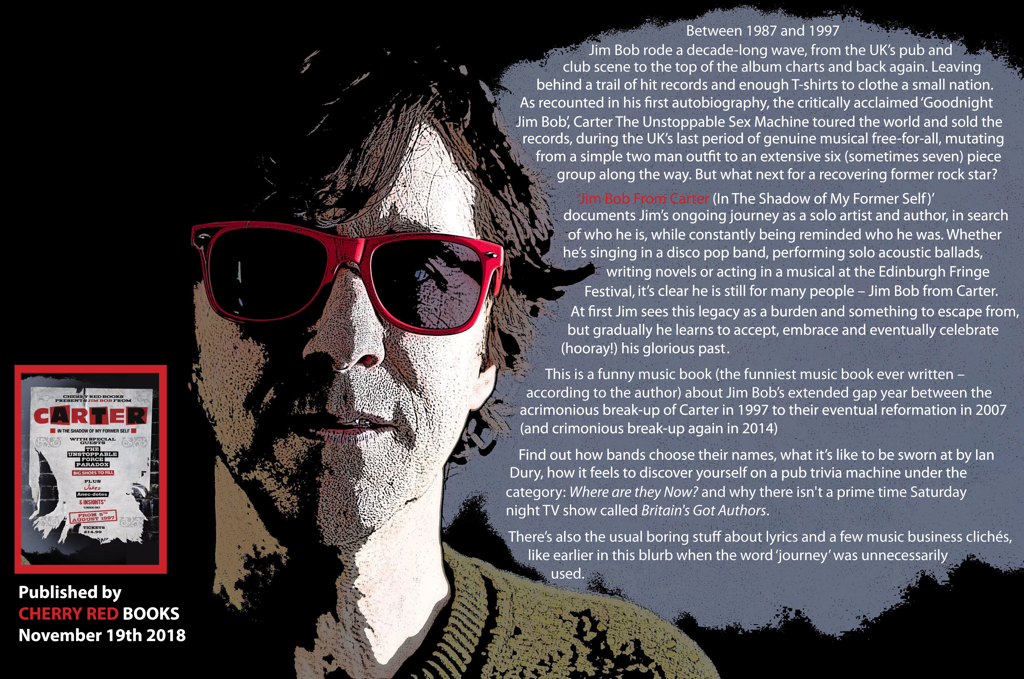 Watch this space for more news on CherryRedBooks -

Firstly I know you carried on in some capacity but how do you come down from performing in a band like Carter for so many years & so many gigs in a such a whirlwind? Did you sleep for a year?

I don't know if the fact that we weren't as successful when we split up (the first time in 1997) as we were at our peak made it less of a shock to stop.
​ I remember it being a relief though, as I hadn't been happy for quite a long time and wasn't enjoying being in the band. It was definitely nice to have to do nothing for a short while. To be able to watch telly and read books and have nothing on the calendar. Those two things are probably still my main two ambitions. I'd love to be able to do nothing other than read books and watch TV. Those business billionaires who carry on trying to dominate even more of the world make no sense to me. Relax guys. Watch some telly.

We have a section in Phacemag ‘Books that changed your life’ it doesn’t have to be that drastic just something that moved you, anything spring to mind?

A Heartbreaking Work of Staggering Genius' by Dave Eggers. I was struggling with my Carter book at the time. It wasn't really working and was just another tedious pop singer's story. When I read 'A Heartbreaking Work of Staggering Genius' I realised there was another way of writing my book. Dave Eggers doesn't stick to any obvious rules. I liked how he explains how to read his book for example. He says if you don't believe it's true, pretend you're reading a novel. It also has a competition halfway through the book, which I nicked for my Carter book. I might never have finished 'Goodnight Jim Bob' if it wasn't for Dave Eggers' book. And then I wouldn't have followed it up with a novel and then three more novels and so on.
​I met Les Carter when I managed the bar in a brilliant club (Corsica Sudio's) in the Elephant, you went through so much are you in close contact?

Relatively so. We still talk via email and go for a drink every now and again. We see each other less than before though, mainly because Les doesn't live in London any more.
​The last time I saw him was a week ago at Sean Hughes' funeral. It was a bit weird in a way that we might have looked like we were there as Carter rather than two separate friends of Sean's. After the funeral was the longest time me and Les had spent together without other people with us for ages. That was nice.

Jim Bob.co.uk
Has writing fiction always been a Love, or was it a new found friend? Your clearly good at it!

​It wasn't until I wrote the Carter book that I'd even considered writing a novel. Without trying to be too humble, I don't think I am that good at it. Maybe the end results are good but I find the process really hard. I do sometimes wonder why I'm doing something that at times can be so unenjoyable. I'm not suggesting I'm a hero for suffering for my art but Mrs Jim Bob certainly is.

Finally who who you listening to when Carter USM were at their peak, I was born in 1965 & my 8 years younger brother got me into you! You were so ahead of your time for me.

At our peak I probably listened mostly to bands who'd become friends on tour with us, like the Frank and Walters and the Sultans of Ping. Other than that I remember playing Radiohead's The Bends and REM's Automatic for the People over and over right the way across America. It didn't help with my mood at the time. The big influences on Carter at the start though were Tom Waits, the Band of Holy Joy, Public Enemy, LL Cool J, Age of Chance and World Domination Enterprises.
​Thanks so much Jim, I'm hoping to catch you play again one of these days.. thanks again -
​p/s I did ask my brother for a question, interestingly he enquired about 'JON' but we then found out he had sadly died. RIP X 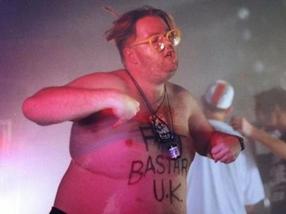