Inscribed by The Authors

I love this, I've put my picks below. Best pp

A superb presentation copy of Oliver Twist inscribed by Charles Dickens
​to his close friend William Charles Macready for Christmas 1841 (£95,000); 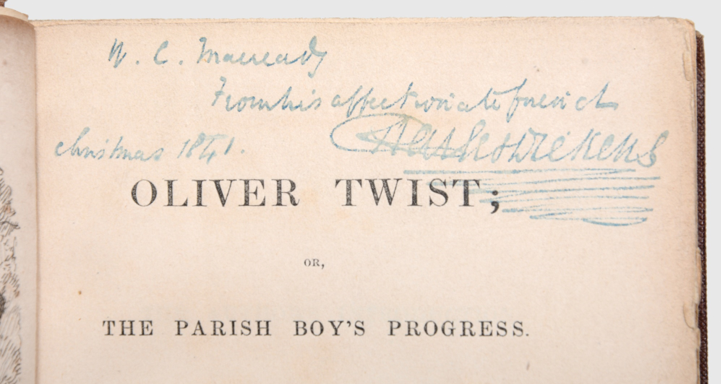 “W.C. Macready from his affectionate friend Charles Dickens Christmas 1841.”
Macready was an actor and theatre-manager and was introduced to Dickens in 1837. They immediately became close friends, as did their wives, and Dickens was soon attending Macready’s rehearsals and performances. Dickens would also visit Macready to read out part of his novels as he worked on them, sometimes moving Macready to tears. Nicholas Nickleby, published in 1839, was dedicated to Macready and he was the godfather of Dickens’s daughter Kate.
Dickens inscribed this copy of Oliver Twist shortly before he and his wife left for America on 4th January 1842 leaving his children in Macready’s care. When Macready retired from the stage in 1851 Dickens gave the celebratory speech and they remained friends until Dickens died in 1870.
Oliver Twist remains one of the best-known of all works of English fiction.
​

​A first edition of Live and Let Die inscribed by Ian Fleming
​in 1954 to an old friend from Eton who helped him gain access to contacts in the illicit diamond trade which Fleming needed for research into Diamonds are Forever (£65,000); 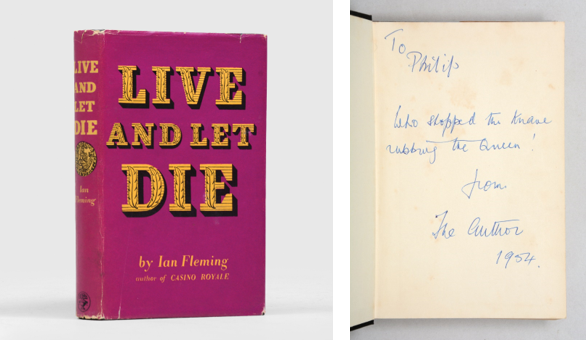 A first edition, presentation copy, inscribed by the author: “To Philip who stopped the Knave rubbing the Queen! From The Author 1954”
The book is inscribed to Philip Brownrigg who was an old friend of Fleming’s from Eton. Brownrigg was a senior executive at De Beers, the diamond merchant, and helped Fleming gain access to a number of contacts connected to the illicit diamond trade, including former head of MI5 Peter Sillitoe, who assisted with Fleming’s research for Diamonds are Forever (1956) and the non-fiction work The Diamond Smugglers (1957).
​

​A first edition of You Only Live Twice by Ian Fleming
​inscribed to Richard Hughes who was one of the two people the book was dedicated to (£60,000); 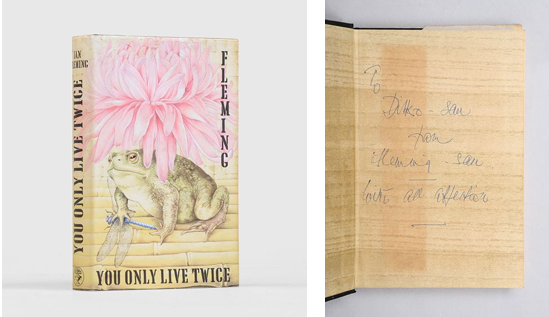 First edition, dedication copy, inscribed by Fleming to one of the book’s two dedicatees Richard Hughes: “To Dikko-san from Fleming-san. With all affection.”
In 1959 Fleming took a five-week trip to the East and in Tokyo his guide was Richard “Dikko” Hughes, the Sunday Times’s Far East correspondent. Hughes recruited a Japanese journalist, Toreo “Tiger” Saito to join them and Fleming immortalized them both in You Only Live Twice. Hughes became the model for Richard Lovelace “Dikko” Henderson, the Australian spy stationed in Japan and Saito was the fictional Tiger Tanaka, head of the Japanese secret service. The book is jointly dedicated: “To Richard Hughes and Torao Saito But for whom etc…”
​

​HG Wells inscribed and drew a caricature portrait in a first edition of The War of the Worlds printed in 1898 (£25,000); 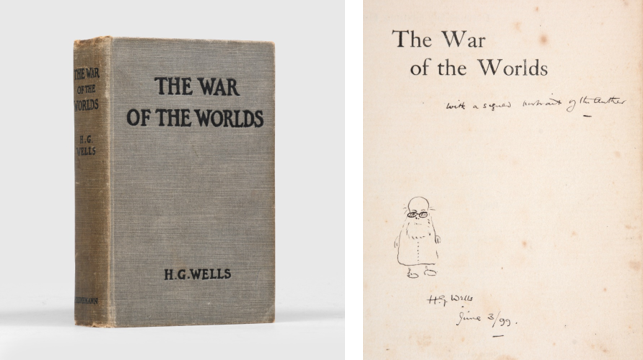 A first edition of Wells’s classic Martian invasion novel, inscribed and dated by the author: “with a signed portrait of the author. H.G. Wells June 3/99.”
The inscription includes one of Wells’s characteristic cartoons, a caricature portrait of an old, bald man with a long white beard and dark glasses. The portrait does not resemble Wells and could be a visualisation of the unnamed narrator of the book.
The War of the Worlds was originally printed as a serial simultaneously in Pearson’s magazine in the UK and Cosmopolitan magazine in the US, from April to December 1897. This copy is the second issue and signed copies of it are rare.
​

​DH Lawrence inscribed the first copy off the press of Lady Chatterley’s Lover
​in 1929 to his publisher Edward Titus, who privately printed the book for him in Paris (£37,500); 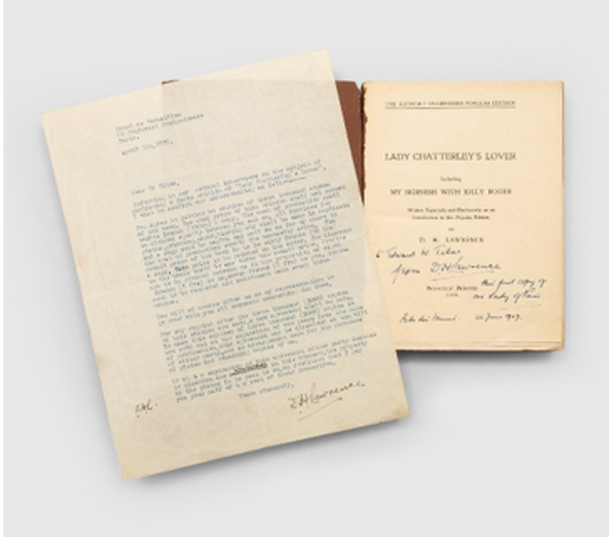 The first copy off the press of the second authorised edition of Lady Chatterley’s Lover inscribed and presented by the author to the publisher Edward Titus: “To Edward W. Titus from D.H. Lawrence this first copy of our Lady of Paris. Forte dei Marmi, 26 June 1929.”
Accompanying the book is a typed letter signed from Lawrence to Titus which was Lawrence's attempt to draw up a formal contract with his publisher for this edition. He outlines the agreed terms including the published price, number of copies to be printed, terms under which further printings could be made and details regarding the termination of the contract. Interestingly Lawrence corrected the word “partnership” to “connection”.
One thousand copies of Lady Chatterley's Lover were first published in Florence in 1928 and almost immediatedly pirated by at least four different publishers. Spurred on by these piracies and to get an affordable edition into circulation Lawrence approached Titus and negotiated this edition, to be sold at 60 francs, with a new introduction regarding the pirated printings entitled “My Skirmish with Jolly Roger”.
Presentation copies of Lady Chatterley’s Lover are very rare and Peter Harrington know of only one other.
​ 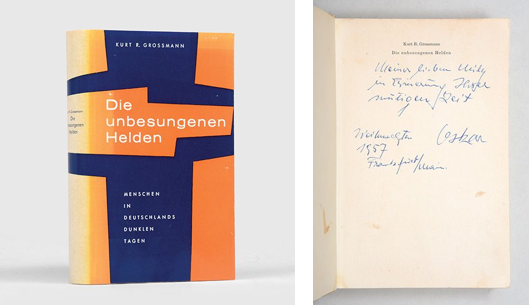 A first edition of the only autobiographical account of Oskar Schindler’s wartime work to be published which is poignantly inscribed to his wife Emilie, translated as: “To my dear Mily in remembrance of her courageous time. Christmas 1957, Frankfurt am Main”
Kurt Grossmann, the author of the book, wrote to Schindler in 1948 asking for a copy of the story of how he had saved the Jews. Schindler’s story is printed in this book in entirely his own words and his general dispassionate account becomes more emotional when recounting Emilie’s involvement.
Oskar arrived in Frankfurt in 1957 on the eve of the publication of the book almost destitute and leaving his wife behind in Argentina. Oskar presented this copy to her as a Christmas gift and his inscription is particularly important as the couple never met again and in the inscription Oskar fully acknowledges Mily’s courageous work.
Emilie’s important role alongside Oskar in saving hundreds of Jews has been progressively written out of the story. In 1963 an article about the Schindlers in a major German newspaper in Buenos Aires asked “Father Courage has not been forgotten – but what about Mother Courage?” In Thomas Keneally’s book Schindler’s Ark and the film Emilie’s role was minimised leading her to ask “Oskar is the hero and what about me? I saved many Jews, too.”
Peter Harrington has traced no other copies of this book signed or inscribed by Schindler.
The catalogue also contains many other incredible works including:
share
​
google.com, pub-1336815800049544, DIRECT, f08c47fec0942fa0