Jah Wobble & The Invaders Of The Heart have announced a UK Tour throughout January, February and March 2020.

The legendary bass player and his band begin the dates at The Cavern in Liverpool on the 16th of January before ending up in the Norwich Art Centre on the 21st of March. The seventeen show run will include a London date at the Jazz Café in Camden Town on Thursday the 23rd of January 2020.

Wobble’s most recent and album ‘Realm Of Spells’ was recorded with Bill Laswell and saw the two musical pioneers collaborate on a joint long player for the first time since the release of ‘Radioaxiom: A Dub Transmission’ in 2001. Released on limited edition vinyl, CD and available digitally, the current album captures perfectly the sound of the coming together of post punk London and the avant garde of New York’s no wave movement of which the two were very much key.
The live shows will see the original PIL bassist and The Invaders Of The Heart line up of Marc Layton-Bennett (drums & percussion), George King (keyboards) & Martin Chung (guitar) perform a set of new tracks together with some of his finest solo, Invaders Of The Heart and Public Image Limited output from an incredible and genre bursting career that spans over forty years. Full list of live dates below - pp
​ 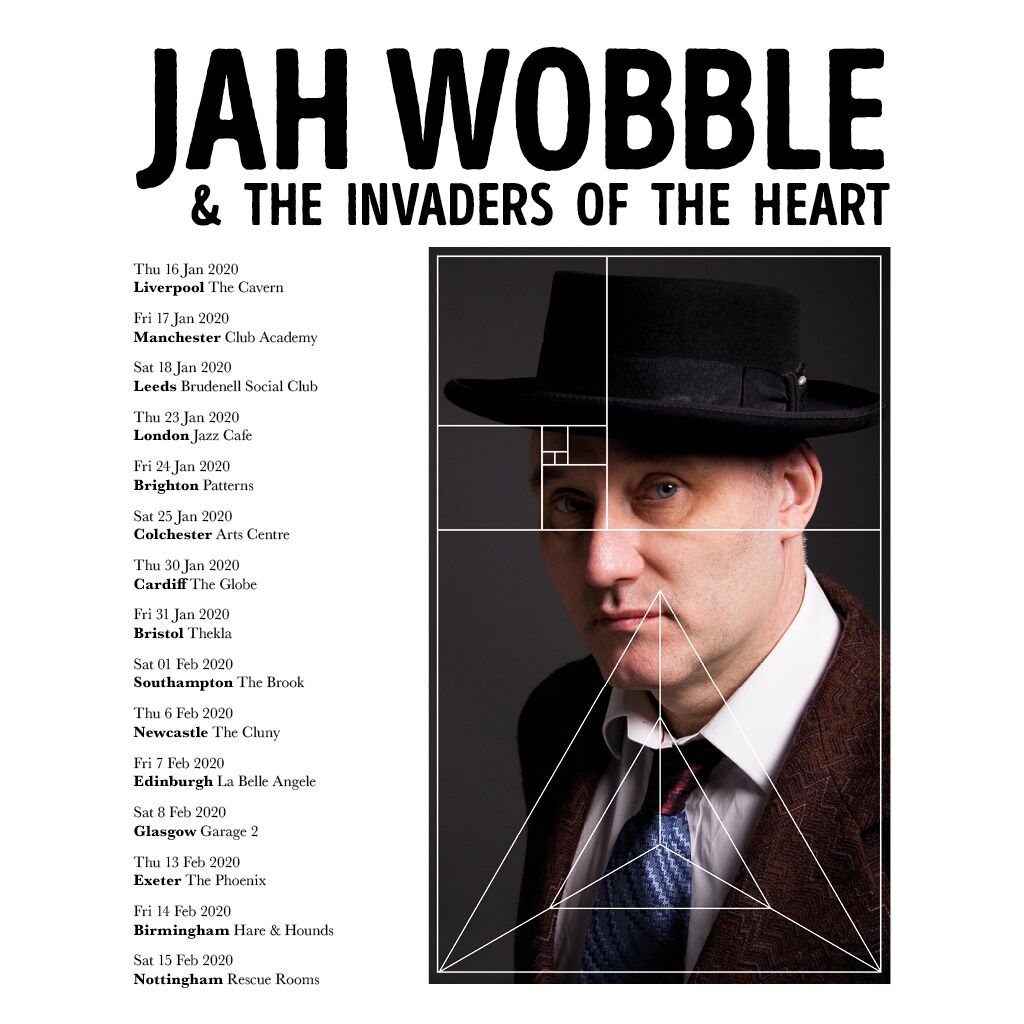 Metal Box, one of the more mercurial, melancholic post punk records, captured the primal energy that so captivated the innermost depraved energies of  castigated youth. John Lydon's animalistic wordplay, Keith Levene's sparky guitar parts and Jah Wobble's dance oriented groove worked together to make Metal Box the "one off" its bassist described it in this interview. Not only is it PIL's finest work, it's also one of the tentpoles of the late seventies. If you me, it's en par with London Calling for inventiveness, atmosphere, anger and aspiration. Wobble left the band shortly, focusing his four stringed guitar on a variety of records, boasting Dolores O'Riordan, Sinead O Connor [now Shuhada' Sadaqat] and Bill Laswell among his collaborators.

You worked with the extraordinarily visceral Dolores O Riordan. How was that for a collaboration?

Oh, she was lovely. Just great to work with. Sometimes people can be a bit pretentious in this game. I'm a bit more down to earth and so was she. I first met her in a Private Hospital, Portland I think. She'd injured herself, her leg was all covered up in plaster. I don't know if they still do that anymore, but her leg was hanging. Anyway, just lovely. I was going through a bit of a purple patch and was trying to see if we get on, should we stop pussy-footing about and then we thought "fuck it", let's do it. Dolores had an incredible voice, so clear. Such a great loss. I liked her a lot. She didn't have to be so accomadating, a lot of Irish people are. I guess it's the karmic effects on some of us for the colonial actions [laughs].

Keeping it on the Irish artists, you played with The Edge and Sinead O Connor.

Yes, The Edge is a lovely guy. I think he borrowed from Keith and PIL, which I'm not knocking. The success of PIL has allowed me to go off and do some really left field stuff. He's a real down to earth guy, he plays those drenched harmonics, those effects. You mentioned The Clash [guitarist Keith Levene was briefly a member of The Clash], I was never that big on them. But like U2, they've got their songs. All these great guys, come around. London Calling, Rock The Casbah, Bloody Sunday. U2 had that "it's a beautiful day" song; that's a good song!

By every measure of the word, Visions of You is a post punk classic. How did you collaborate with O'Connor?

I knew Kevin Mooney [Adam Ant/Sinead O Connor], who was playing with John Reynolds. Sinead was married to John, so we played together. I was writing songs for an album [Rising Above Bedlam] and this one one seemed to be written with her in mind. She's got an amazing clear voice, she broke the membrane of a mike. That takes some doing!

She really tackled the Catholic Church.

Oh yeah! I came from a real staunch Catholic background, The Sisters of Mercy would tell us about the saints. They'd go into the real gory details about what they did, you wouldn't do it, so I was a bad Catholic. People won't understand it today, younger people I mean, but their stock really has gone down in years. Sinead did this years ago, people knew even then!

Memoirs of A Geezer is largely considered one of the more outstanding memoirs by a rocker of the first ilk. How was it to write?

Few reasons, there were some things I wanted to document. I find that the place I grew up in is going. Really, it was trying to explain the place I grew up in. When New Labour came along, there wasn't a voice for the working classes anymore. That sense of betrayal came to haunt years later. It was long before Brexit, but it was that feeling that was in the air. Now, we see what that led to. I was also just trying to tell a story. People I knew wanted to tell me to write something about what I've seen.

Bill Laswell is one of America's most accomplished bassists.  How did you collaborate?

Oh, I've worked with Bill loads of times. Loads. The first time.. it was after a period I'd come back in the game. I left PIL and almost straightaway worked with Jaki and Can. Then I played with The Edge and things were looking good. Then, I kind of fucked up with drink and drugs. I got it sorted by '86. So, I was working days, I was a part time musician. I didn't think the new musicians would want me back. I was working on an album at that time called Without Judgement. Getting back in. We sent to a label [Les Disques du Crepuscule]. Nicky Skopelitis was a guitarist who knew Bill. They were familiar with my stuff from Metal Box. Met Nicky for a meal when I flew to New York. Found out my favourite album was Bill's, even though it was  a Japanese import! [chuckles]. Through that, I worked on the Ginger Baker album. I didn't meet Ginger at the time, they probably thought it wasn't such a good idea, things might get sparky. I met Ginger a few years later, he always wanted apple pie, and someone gave him rhubarb! I then thought it was a good idea we didn't meet during the album. Bill and I made an album together this year. I've played on a lot of classic records

One of them Screamadelica

Yeah, that's right. I first met those guys when they were very young and I was a bit older. They were fans. I was about twenty two and the Primal Scream guys were, fourteen, fifteen, sixteen? Maybe not that young, but definitely teenagers. I got them into the venue and got them a beer. Good lads.Robert is a lovely, lovely man.  So, Andy [Screamadelica producer] got me in to play the dub session. As you say, great album.

As well as a tasty bassist, you play drums. You played drums on parts of Metal Box?

I played drums on Careering, yeah. I also put down some of the drum loops, we'd have to physically cut a loop back then.  PIL was basically three young guys mucking around, no management. No way you'd get the money to make that album now! We were having trouble with drummers around then. We had a really good drummer on the first album called Jim Walker. The experience wasn't great for him, not many performances. I only played something like twenty shows with PIL, one of the reasons I quit. I'm in a band, I mean, I want to play. Keith and I did the Metal Box Dub shows a couple of years ago. It must be seven actually, it's been a few. That was some unfinished business, I guess. Keith and I called the musical shots on Metal Box. Keith plays drums on Poptones, he gets that beat down really well.

It's an incredible record, how do you think it holds up?

It was a one off. I guess it is an iconic record. I studied art and I find that art is always thirty years ahead of music. I think it was post-punk, abstract expressionism. The art of the fifties dealt with the loneliness of the world, some nihilists. They dealt with 'Theories of Emptiness', some crazy artists at the time. I think Metal Box is like that.

I don't know. Maybe Keith, he's big into that Beatle stuff. I was more soul, dub, dance. You can hear it in the dance. I've done a lot of that since. I was furious at the time, but I think something's happen as they happen. I think artistically it was fulfilling to leave. John and Keith went on to do things like 'This Is Not A Love Song', which requires a different kind of motivation.

Would you like to tell us what to expect of the 2020 shows?
​
Well, not much of a change. We have two outfits, we play some Metal Box stuff. The guys in the band really know how to play, they're a really good band. I've just finished an album called 'Ocean Blue Waves', we'll be playing some of that. We've got to play shows if we want to eat, we can't live off the royalties anymore, although that side of things is improving.