Ali Horn has had an interesting 2019 so far. His current single, ‘Dreamers’, had its release date moved forward when 6 Music’s Liz Kershaw fixed on it as her track of the year to date. His last single Modern Voodoo (‘kaleidoscopic’according to Gigslutz), was regularly heard on 6 Music and, the day after we meet, he is flying to Ulyanovsk, birthplace of Lenin, as part of a Unesco sponsored cultural exchange. This is not standard stuff for an aspiring singer / songwriter.

"we love dreamers @Phacemag in more ways than one, no it's a great song.

​Initial releases under the guidance of Carl Hunter, former member of The Farm and current director of ‘Sometimes, Always, Never’ starring Bill Nighy, Jenny Agutter and ‘Control’s’ Sam Riley, led to a deal with Rooftop Records / Funnel Music and a team that includes producer Chris Taylor, Studio Manager at Parr Street Studios where Ali performed for 6 Music in March of this year. 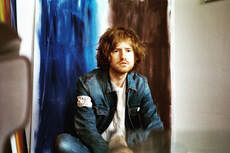