ANNOUNCES THE PRESTIGE 70 PODCAST AND VIDEO SERIES
AS PART OF YEAR-LONG 70TH ANNIVERSARY
​ CELEBRATION OF THE LEGENDARY JAZZ LABEL! 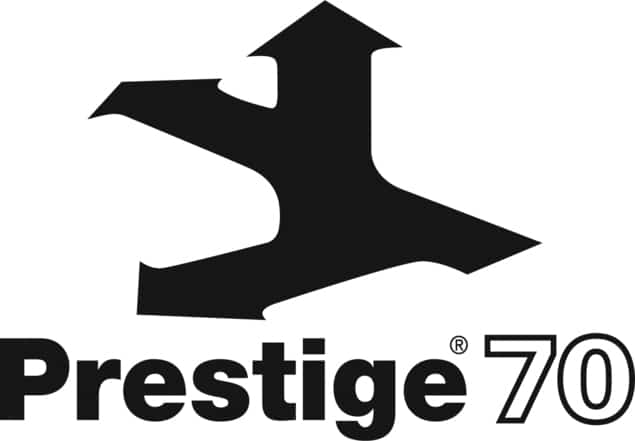 CLICK LOGO LINK ABOVE TO LISTEN! - The first episode of the podcast is now available, with new episodes dropping every Tuesday. Prestige 70 is available at craftrecordings.com/prestige70 and across all major platforms, including Apple, Spotify and Stitcher, while full-length video episodes of each interview are also available on YouTube, among other video platforms. The series’ lineup of guests includes multiple GRAMMY® Award–winning jazz musician Chick Corea; saxophonist and Prestige artist Azar Lawrence; songwriter, producer and bassist Miles Mosley; and multi-instrumentalist, songwriter and producer Nate Mercereau.

Los Angeles, CA--Craft Recordings is proud to announce the launch of its very first podcast, Prestige 70—a limited series that salutes the legacy and spirit of the venerable jazz label Prestige Records. Produced as part of the label’s 70th-anniversary celebrations, Prestige 70 features intimate conversations between acclaimed musicians, composers and producers, and host Scott Goldman—who, as the longtimemoderator of the GRAMMY® Museum Public Programs Series, has interviewed hundreds of iconic figures in music. Through the lens of contemporary artists, Prestige 70 not only looks back at the musicians and recordings that made the label so important but also looks to the future, as a new generation continues the tradition of redefining and pushing the boundaries of jazz.

Throughout the ’50s and ’60s, Prestige was at the forefront of modern jazz, helping to usher in the eras of bop, hard-bop and soul-jazz, while later branching out into free jazz and fusion. Founded by producer Bob Weinstock in 1949, the label developed the careers of some of the most influential names in music, including John Coltrane, Miles Davis, Thelonious Monk, Stan Getzand Sonny Rollins. Over the past year, Craft Recordings has paid tribute to Prestige’s hallowed recordings with a variety of playlists, listening events, vinyl reissues and box sets, including the critically acclaimed collection Coltrane ’58: The Prestige Recordings, released in March, and the forthcoming vinyl edition of The Legendary Prestige Quintet Sessionsfrom the Miles Davis Quintet, available December 6th.

Artists featured in the first six episodes include:

​Poncho Sanchez: Highly influenced by the Afro-Cuban sounds of artists like Tito Puente, the GRAMMY® Award–winning Latin jazz bandleader, salsa singer and conga player began his career as a teen in the 1960s, getting his big break in the mid-’70s as a percussionist in Cal Tjader’s band. By the end of the decade, the first-generation Mexican-American artist had formed his own group and would become a prolific recording artist—releasing nearly an album a year for the next three decades. In addition to Tjader, Sanchez has collaborated with an impressive lineup of talent, including Benny Golson, Hugh Masekela, Art Pepper and Tower of Power. Sanchez is currently celebrating the release of his new album, Trane’s Delight, which pays tribute to the music of John Coltrane and is available now on Craft’s sister label, Concord Picante.

Azar Lawrence: One of the only remaining Prestige artists to still be actively touring and recording, the acclaimed saxophonist has performed as a sideman to many of jazz’s greats, including Miles Davis, Freddie Hubbard, Woody Shaw and McCoy Tyner. The artist also recorded several albums as a leader, including three groundbreaking titles on Prestige: Bridge Into the New Age (1974), Summer Solstice(1975) and People Moving (1976). Craft’s Jazz Dispensary imprint will be reissuing Summer Solstice on vinyl for the first time on November 15th as part of the Jazz Dispensary Top Shelf Series.

Miles Mosley: An upright bassist, vocalist, producer, composer and arranger, Mosley has recorded, toured and collaborated with an impressive lineup of artists, including Andra Day, Christina Aguilera, Rihanna, Kendrick Lamar, Lauryn Hill, Mos Def and Avenged Sevenfold. A founding member of the West Coast Get-Down—known as the Wu-Tang Clan of Jazz—Mosley is also a solo artist, whose critically acclaimed album UPRISING was released in 2017 on Verve Records. In addition to performing and producing, Mosley is also an accomplished composer, scoring film, TV and video games for such esteemed companies as Disney, DreamWorks, Warner Brothers and Activision. Miles recently released a new single titled “BROTHER,” the first single from his upcoming new album, set to be released in early 2020.
Chick Corea: Keyboardist, composer and bandleader Chick Corea has attained iconic status in music. He is a DownBeat Hall of Famer and NEA Jazz Master, as well as the fourth most nominated artist in GRAMMY® Awards history with 64 nods and 22 wins, in addition to four Latin GRAMMYS®. From straight-ahead to avant-garde, bebop to jazz-rock fusion, children’s songs to chamber and symphonic works, Chick has touched an astonishing number of musical bases in his career since playing with Miles Davis in the late ’60s and early ’70s. Chick’s classic albums as a leader or co-leader include Now He Sings, Now He Sobs (with Miroslav Vitous and Roy Haynes), Paris-Concert (with Circle: Anthony Braxton, Dave Holland and Barry Altschul) and Return to Forever (with Return to Forever: Joe Farrell, Stanley Clarke, Airto Moreira and Flora Purim), as well as Crystal Silence (with Gary Burton), My Spanish Heart, Remembering Bud Powelland Further Explorations (with Eddie Gomez and Paul Motian).A venturesome collaborator, Chick’s partnerships with Gary Burton and Herbie Hancock have endured decades, while he has also teamed with such diverse artists as jazz legend Lionel Hampton, pianist Stefano Bollani, banjoist Béla Fleck and vocal superstar Bobby McFerrin. Most recently, Corea released a new album, Antidote, on Concord Jazz, which delves deeply into the Spanish, Latin, and Flamenco traditions that have indelibly shaped his unmistakable sound.

Nate Mercereau: is a multi-instrumental virtuoso, songwriter and producer whose acclaimed debut album, Joy Techniques, was released earlier this year on his own How So Records. Based in Los Angeles, Mercereau’s performance, songwriting and production credits are wide-ranging and ever growing. His talent as a multi-instrumentalist can be heard on multiple tracks on JAY-Z’s platinum-certified chart-topper 4:44, including “Bam,” “Mercy Me” and “Blue’s Freestyle/We Family.” In addition to songwriting credits for “Sinful” and “Blood Knows” from Rhye’s Blood, Mercereau played guitar, bass, and French horn throughout the album. He also joined forces with longtime friend and collaborator Ricky Reed to produce “Bet Ain’t Worth The Hand,” “Bad Bad News,” “Beyond,” “Forgive You” and “If It Feels Good (Then It Must Be)” on Leon Bridges’ Good Thing, which bowed at #3 on the Billboard Top 200. Mercereau has also recently contributed to albums from Lizzo and Shawn Mendes.
​“With our rich catalog of timeless recordings, a podcast and video series felt like a natural evolution,” says Craft Recordings President Sig Sigworth. “Prestige is home to some of the most influential artists and significant recordings in history—I couldn’t think of a better way to honor the label’s legacy and impact than by tying the past to the present through the ears of contemporary artists.”

The producer of the series, Craft’s VP of Content Development and Strategy, Laura Sáez, added “We are thrilled to have so many respected names in the music community take part in Prestige 70. Thanks to the impeccable interviewing skills of Scott Goldman, these incredible artists truly convey the importance of Prestige’s recordings to the history—and future—of music.”
share
google.com, pub-1336815800049544, DIRECT, f08c47fec0942fa0