Hi Amy, it's great to have a catch up, what’s been happening, were you ill for a while?

Yes, ah it’s a bit of a long story… Me and my husband have been struggling to have a baby. I have severe endometriosis and pCOS and need more surgery at some point to remove part of my bowel. The timing of this is all up to my endo that decides when to make it an emergency op or not. Anyway, I was told that one more surgery would mean I would never be able to have children so we opted to have some eggs frozen for safety. What we didn’t realise was that injecting all those hormones day after day would trigger my bipolar and anxiety disorder and send me spiralling back to hospital. To say it was not a good time would be a incomprehensible understatement. It’s taken me a long time to incrementally get back to some form of normality again but week by week I’ve been slowly able to do basic things and add them to my list of ‘normal person’ (whatever that means) behaviour. Like, using the phone, seeing people, leaving the house, making decisions, noticing when I’m irrationally attaching my anxiety to things that shouldn’t and disconnecting that fear. An exhausting amount of mental work. For a long time I couldn’t look people in the face too afraid they might look frightening and bring on another panic attack.

Oh Amy that's too much to go through, I had no idea, I was looking forward to you playing at the Phacemag party and was disappointed you had to cancel, but I had no idea...how are you now? Recovering hopefully...

I’m doing really well. I am happy again, functioning, and have got back to a really good place. Can do all sorts of human things (alien that I am) I wouldn’t have made it through without my parents and husband. And of course the hospital and therapists. Thank the f-ing world, I’m alive and all better again! I feel very grateful. It’s certainly an interesting road living with chronic illness. And everyone who has it and lives and thrives with it is a serious warrior. Shout out to all my warrior brothers and sisters x so much love to you all. “It’ll all be alright in the end. And if it isn’t alright? It isn’t the end.”

What a horrible thing to go through, to have to fight! I'm so glad your back in a good place! Has your music helped? I know the singles have been really well received, that must have contributed to your 'good place', you must be happy with your music!?

The singles have been received so well! I couldn’t be happier. I’m so proud of this album and to hear people are connecting with my work and coming to shows and being moved by it means so much to me.

The new single is called ‘sleepwalker’ is that the third? The last was ‘Let the music play’ and they are all contributing to a narrative which finalises with the album?

Yes, as the songs were written about what was happening over the 10 years I wrote them I see the over all album as a book of sorts/an autobiography of those 10 years. So I have ordered the tracks in order of occurrence and put them as chapters of this book. Yes, Sleepwalker I the 3rd Chapter and ‘let the music play’ the 2nd chapter. Now I guess I just want to show more and more people. Can’t WAIT for the album release!

I’m impressed because I imagine it’s harder than you think to achieve your goal - the components harmonising to produce a whole... 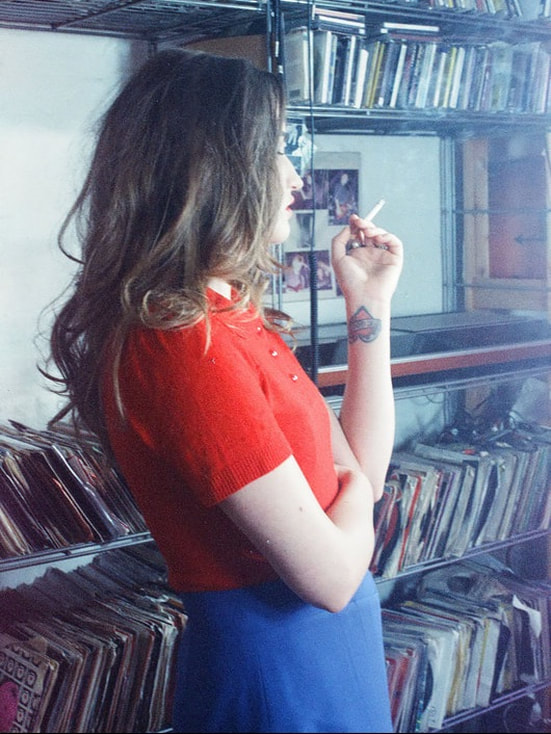 Photograph by Emma Louise Smith - Link - Fran talks with Amy from Feb 19
Have you ever thought about writing an accompanying story, stories, poetry ...?

Over the years I wrote a bunch of short stories, snap shotting what was going on at each moment in time. People I loved, people I lost, city’s I got lost in, and nearly swallowed by. Some poems. I’ve thought about putting out a book of those and the lyrics to this album but we will see.

But actually, I was designing a play that tells the story of the album set to the album itself. It’s surrealist and a mixture of Aurelia Thierree and Salvador Dali style set up with a giant book that the characters occasionally walk through the pages and set the new scenes backdrop with each new page. Movement and acting mixed together taking influence from talking heads amongst others. I’m currently looking for the right people to get onboard to make it happen. It has been cast already and some of the amazing team assembled but when I got sick I had to stop production for a while. So maybe at some point there may be a special theatre performance of the story.... We shall have to see!

You played a lovely intimate gig on Sat...how was that, how did you feel, were you able to enjoy the moment?
It was one of the most relaxed gigs I’ve ever done. I felt so at ease playing and telling my story. It was so hot we were all melting in there and we had to ask everyone to move in because people were crowded outside and couldn’t get it. It was a joy to play and I loved every second of it.

Thanks for being so open Amy, it took me by surprise actually, but communication is a beautiful thing, it encourages positivity, health and healing.