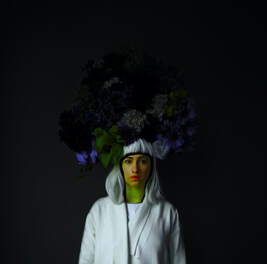 Link - AnnaJordanProject.com
Anna Jordan was born in 1986. The Berlin based transdisciplinary artist is using the pseudonym Anna Jordan Project.   www.annajordanproject.com for her visual artworks and works with the name The Allegorist as an electronic music producer, since 2015. Anna writes all of the music and creates all of the videos , visuals and artworks herself.
In 2016 her debut album Botanical Utopia was released by the greek label Kraak Records.

In 2017 Anna Jordan began working simultaneously on music and video production, which resulted in her latest audio-visual works for her second album Hybrid Dimension I.
​This album was released in 2018 at Detroit Underground, Los Angeles.
http://detroitunderground.net/artists/the-allegorist/

"The Allegorist stands for an imaginative journey through all ages, for a better future. It mixes all styles and genres and sets no limitations. Every great idea is welcomed and included into the mindset of a diverse unity. It sings in the fictional and majestic Mondoneoh language, to connect all nations and honour all our ancestors.

"The Allegorist ​is happy to inspire the soul warriors. Because there is a better future. This future cannot be reached without a change and this has to begin in our minds."

Hi Anna I have to say from watching the video that the music & visual seem have been created together - is that the case ?

It’s not possible for me not seeing visuals while I’m doing music. But since we don’t have the tools yet for creating them simultaneously, I did the music first.

Are you still based in Berlin, i’ve heard it’s an amazing melting pot of creativity are you inspired by your contemporaries can you share your process/ideas?

I've never really been anywhere before, so I didn’t know what to expect from Berlin when I moved here with no money, plans or connections in 2010 from Hungary. I only came to live here, so I was surprised to realize, that it is a very creative city. Despite the difficult start I learned to love Berlin very much. I couldn’t have gone to a place which would have been a better fit for me.

After I decided to leave my comfort zone and discover the musically creative communities in Berlin around 2017, two years later after I started to make music, I have found some inspiring places very unique worldwide. I’m very grateful for all the possibilities this city offers in regards of connecting with musically interested people, likeminded artists, or its informative events and open-minded, welcoming spaces.

What about when you were younger were you very musical, what was your taste in music did you grow up in Berlin?

I always tried to get involved with music, but it wasn’t easy. As a child I was singing in the choir in grade school and we had a guitar and keyboard at home I sometimes tried to play with but self-expression was forbidden and music was only allowed in a very limited religious form.
Later I listened to everything,  like reading a lexicon or an encyclopaedia! I had a few attempts trying to do more, but it wasn’t until 2008 when I moved into an arthouse in Budapest to paint. It was here I made my first social contacts, and the first steps towards breaking through my instilled fear of music. There were many acoustic musicians and I did some singing, guitar playing with some people there for a few months, which was referred to as 'Anna Jordan Project'. I kept the name, using it until today as my visual artist moniker.
In Berlin I was introduced to electronic music more intensely. It was difficult for me to find safety in the city first so it wasn’t until 2015 when I finally started to produce music, basically from zero. Until then my artistic vision was complete in a philosophical way and I immediately created The Allegorist.

I will figure that out once I’m there. For now it’s only that I sent a demo to Detroit Underground and they liked the album Hybrid Dimension I. so we released it.

The Allegorist has a very spiritual humanitarian message, is it important as an artist that the meaning behind a project is heard and is that more important than the ‘listening - watching’ pleasure?

Only recently we began raising the question if we should judge the quality of the artworks dependent on the values and conduct of the artists themselves. This topic became more attention since the #MeToo movement.

In my opinion, the message is equal with the artwork itself. Just as there is no such a thing, like being physically healthy without being mentally healthy as well either. We can see problems rooted in separations in our society everywhere. I personally try to pursue a holistic worldview and think it’s a hypocritical attitude to deny that one thing is not connected to another.

My message behind the project The Allegorist is part of my artistic vision, just like the music, the visual and the narrative.