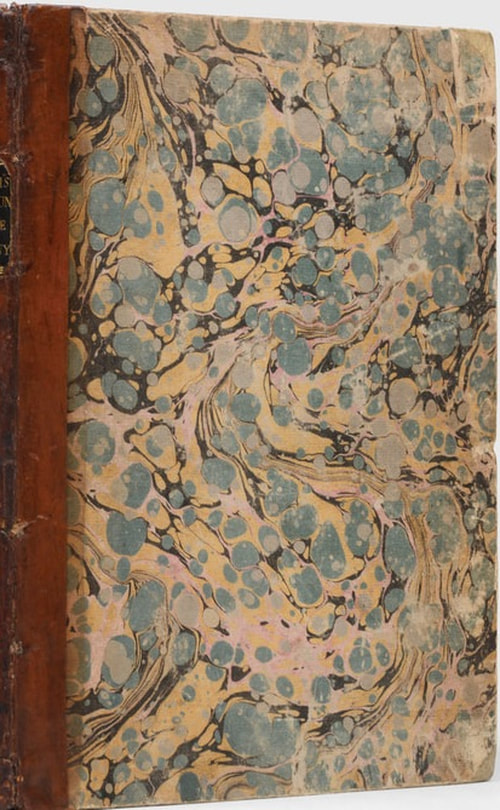 This book Is a fellow officer's copy of Captain Bligh's Personal Account of The Mutiny on The Bounty! It goes straight in to the list of my objects of desire - I think It's incredible! Details below - pp

Peter Harrington, the UK’s largest rare bookseller, this year celebrates its 50th anniversary, and has recently acquired a large collection of books of voyages in the Pacific Ocean from legendary book dealer Louis (Lou) Weinstein, formally of Heritage Book Shop, Beverly Hills, California. Since his retirement to Maui in 2007, Lou has been an enthusiastic collector of  Hawaiiana with his fabulous collection boasting over 1,000 unique items.
The catalogue contains 106 fascinating rare books and is Peter Harrington’s first selection of books from Lou’s collection, augmented with a couple of items acquired elsewhere. It focuses on the grand narratives, the classic voyages and incredible eyewitness accounts of the Pacific Ocean as it was opened up to the world. The books in the catalogue display both Peter Harrington and Lou’s collecting ethos – aiming for original bindings and a keen eye on the best condition.
The voyages undertaken on the Pacific Ocean resulted in cornerstonesof travel literature, describing the region to a European audience through exciting narratives of adventure. Many of these books contain illustrations which would have astonished contemporary audiences, and now stand as a remarkable record of many aspects of life and culture that were rapidly lost. From the earliest Western voyages, such as those by the privateer George Shelvocke in 1719–22, to the later explicitly commercial forays, such as the whaling expeditions and early examples of tourist voyages, this catalogue charts the progressive exploration of the region and the practicalities of empire building.

To download a low res pdf of the Catalogue click below and all items are being exhibited at
Peter Harrington Mayfair, 43 Dover Street, London, W1S 4FF throughout August.

Download File
Pom Harrington, owner of Peter Harrington Rare Books says: “This exceptional collection provides a comprehensive survey of the written accounts and images which introduced the Pacific to Europe. The tales of discovery, fascinating maps and charts and incredible illustrations are well worth seeing and we hope as many people as possible will visit the exhibition this August.”​

Lou Weinstein founded Heritage Book Shop, now located in Beverly Hills, 45 years ago with his brother Ben. It is a high-end antiquarian book shop and many of its clients are drawn from the entertainment industry. Twelve years ago Lou retired from the business and moved to Hawaii, which he had been visiting for over 25 years, and became an enthusiastic collector of Hawaiiana, including books, photos, maps, and ephemera related to the islands, mostly from pre-1900. Many dealers start out as collectors and then become booksellers, but for Weinstein it was the other way around.

As he says..."I believe all booksellers are closet collectors and this passion carries on to their clients and makes them better dealers. I've always taken the position that one should collect what they love therefore Hawaiiana was a natural pursuit for me. More importantly, I spent a lifetime cultivating collectors thus the thought of forming my own collection came easily and with confidence. I had the basic ingredients of a collector, enthusiasm, an understanding of what things are worth, familiarity with the required bibliographies and for the most part … capital."
​
Earlier this year some Peter Harrington experts took a trip to Lou’s South Maui home and Lou was persuaded by his loved ones to sell his personal Hawaiiana collection of over 1,000 items. The Peter Harrington catalogue ‘Pacific Voyages’ contains the first selection of books from Lou’s collection and focusses on the grand narratives, the classic voyages and eyewitness travel accounts of the Pacific Ocean, whilst future catalogues will delve deeper into the interests of this truly dedicated Hawaiiana collector.
​

​A first edition of this notable Cook rarity– the first American account of Cook’s third voyage and the first American book to describe Hawaii. Connecticut-born John Ledyard (1751–1789), the self-styled “mad, romantic, dreaming Ledyard”, joined Cook as a corporal of marines and sailed with the expedition that left the Thames on 12 July 1776. The return voyage on which Cook was killed at the Hawaiian Islands brought him to London late in 1780. However, his return to the United States was delayed by the American Revolution. When he did finally returned home he began to write his recollections of his voyage with Cook, which was published in 1783 in his native Connecticut more than one year before the official London edition.
The book contains an inscription showing it was the “Property of Chichester Library No. 62” at one point. 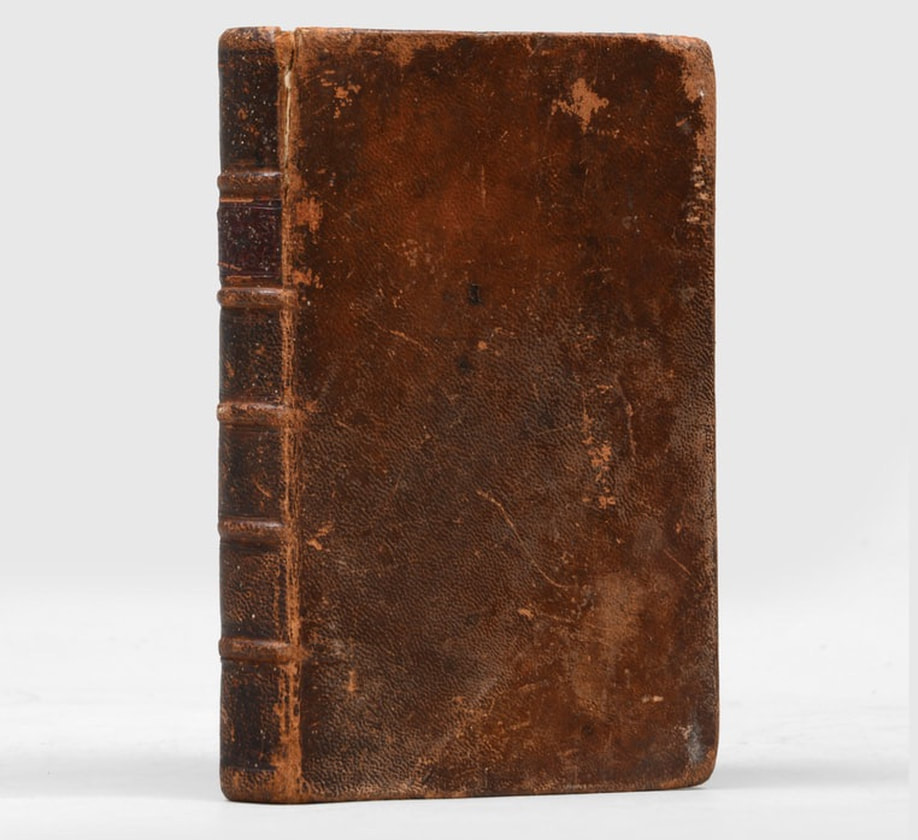 This image and below open : The first American account of Cook’s Third Voyage, and the first American book to describe Hawaii, by the self-styled “mad, romantic, dreaming” John Ledyard (1783). £17,500; 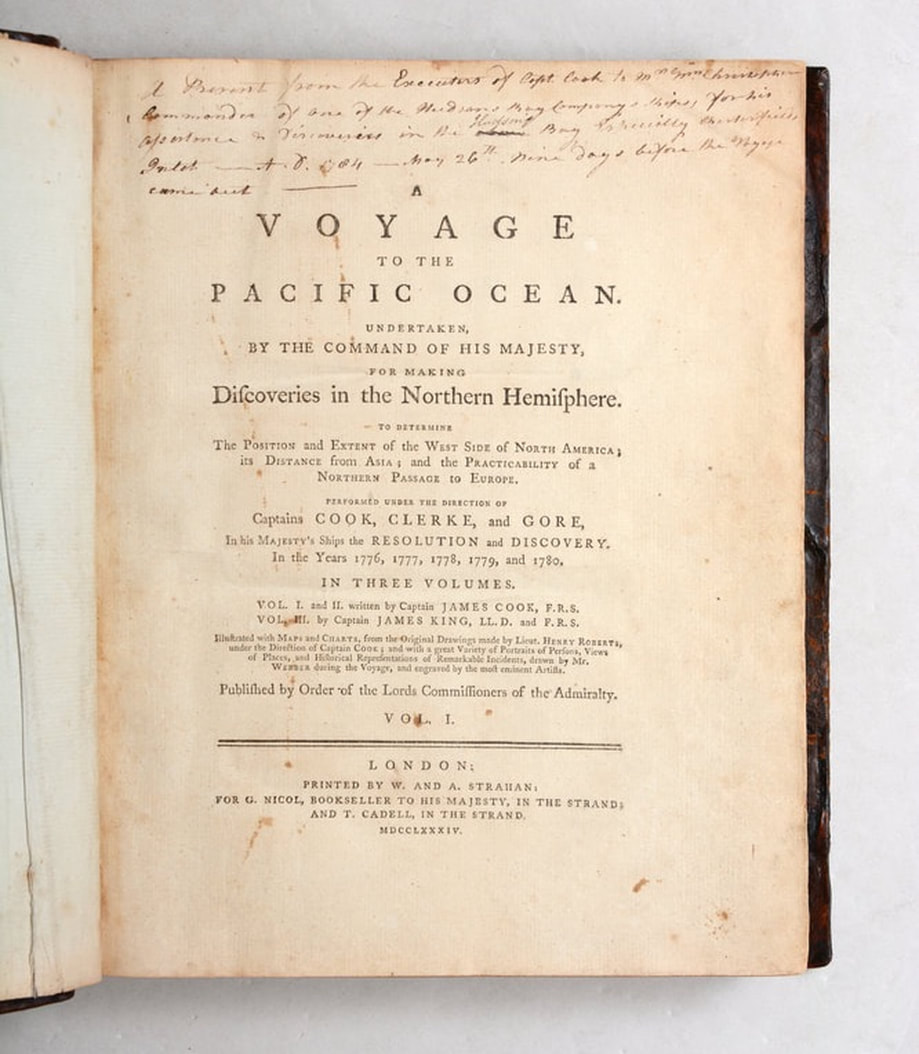 ​The only recorded Presentation Copy of
​ Cook’s Fatal Third Voyage -
£37,500

​Cook’s third voyage was an attempt to find a Northwest Passage, during which he ‘discovered’ Oahu and Kauai at the western end of the Hawaiian Islands and depicted accurately for the first time the north-west coast of America. The voyage culminated with Cook’s death on 14 February 1799 on a Hawaiian beach.
This first edition of Cook’s fatal third voyage, the only known “presentation copy”, was presented to Captain William Christopher of the Hudson’s Bay Company, a highly respected navigator whose work was known to Cook. The presentation inscription, dated 26 May, 1784, cites Christopher’s “assistance & discoveries in the Hudson’s Bay especially Chesterfield Inlet”, which was an important passageway, thought to provide a link to the fabled Northwest Passage.
Interest in the story of Cook’s astounding discoveries and his death meant that the first edition sold out within three days of being published. 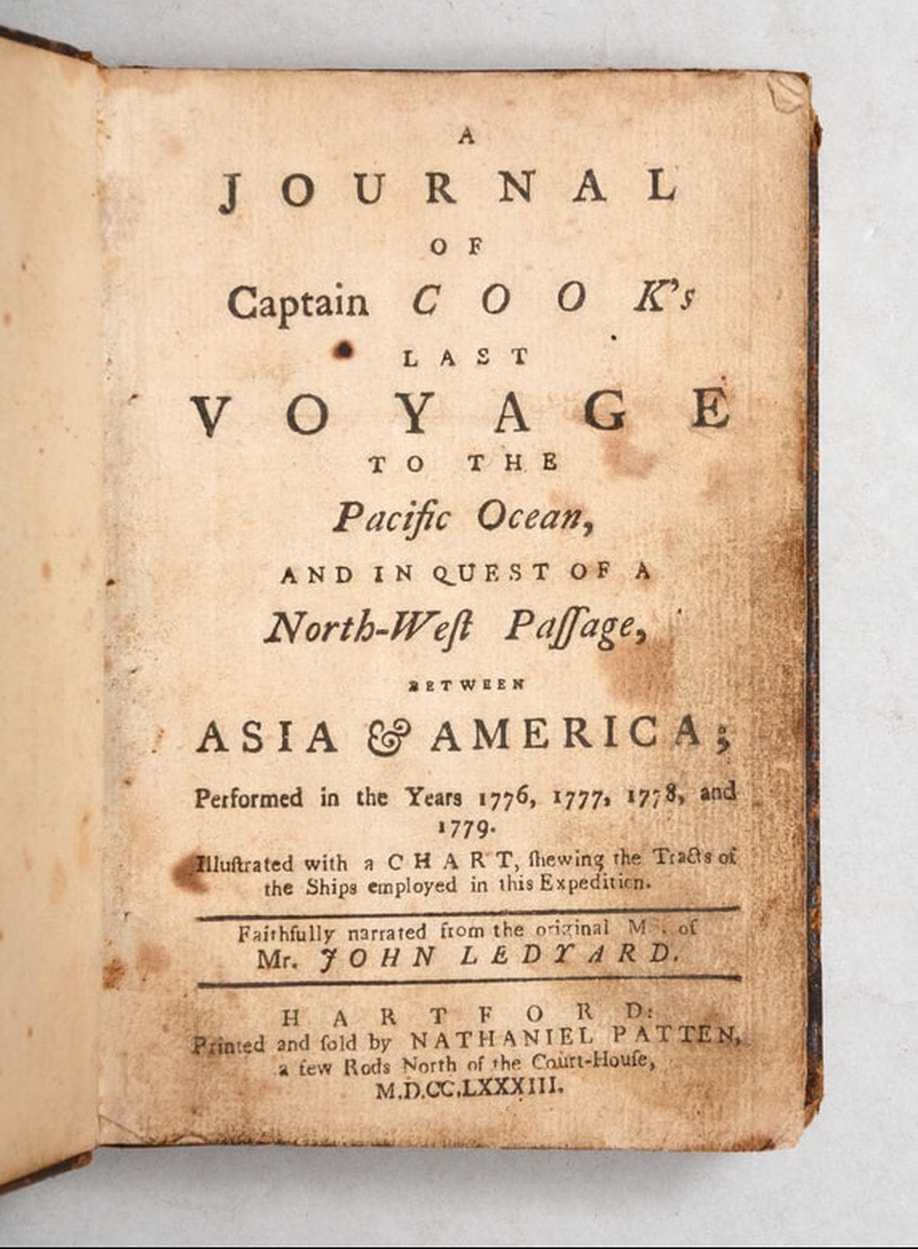 The only recorded “presentation copy” of Cook’s fatal Third Voyage, presented to Captain William Christopher of the Hudson’s Bay Company (1784). £37,500;

​A first edition by Louis Choris
published in 1826
One of 50 large copies of this hand-coloured plate book by ship’s artist Louis Choris - £25,000

A first edition by Louis Choris published in 1826 of one of only 50 large-paper copies, illustrated with 24 fine hand-coloured lithographic plates showing scenes in Hawaii, South America, Easter Island, Kamchatka, the Marianas, Manila, Cape of Good Hope, and St Helena.
Louis Choris was only twenty when he was appointed official artist to the 1815-18 Russian expedition into the Pacific, led by the German-born naval officer Otto von Kotzebue. His beguiling illustrations of the flora, fauna and inhabitants of the Pacific are full of the wonder of a young European glimpsing for the first time the extraordinary riches of the Pacific world. 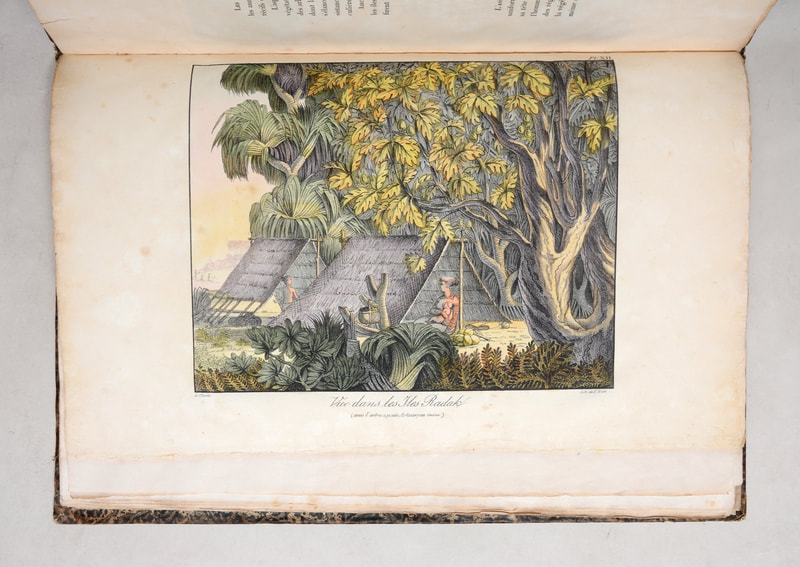 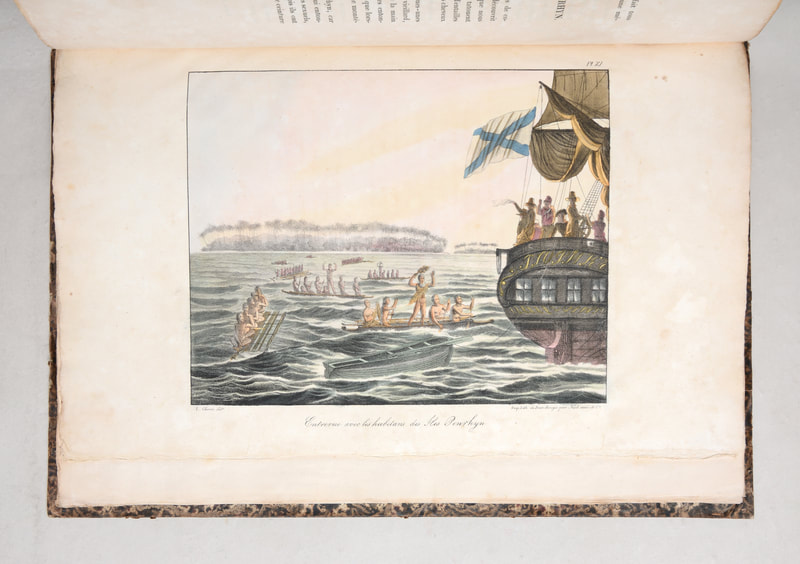 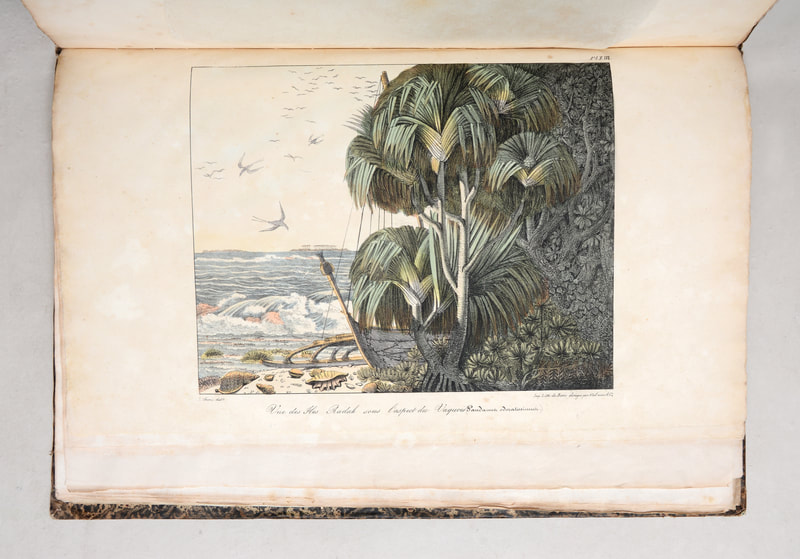 ​A first edition of William Bligh’s account of
A Narrative of the Mutiny on Board His Majesty’s Ship Bounty (1790).

This is his personal account of one of the most remarkable incidents in the whole of maritime history, published two years before his official version of the voyage and the mutiny in an effort to influence opinion in his favour and absolve him from any blame. The book comes from the library of Admiral Sir Peter Halkett who was a fellow officer with Bligh during the Battle of Camperdown in1797 and both were involved in the famous mutiny at the Nore in May 1797.
Loosely inserted in the book is a photograph from the 1935 film Mutiny on the Bounty, showing Clark Gable and Charles Laughtonas Fletcher Christian and Bligh.
William Bligh was the captain of HMS Bounty which left Spithead on 23 December 1787 with a 44-man crew, two botanists and a diarist. The aim was to sail for the Pacific, collect saplings of the breadfruit tree and other plants, and transport these to the West Indies where they would be grown as cheap food for the slaves which would allow the low-cost, largescale cultivation of cotton.
Bligh reached Tahiti in October 1788 and five months later sailed for the West Indies laden with more than a thousand young breadfruit plants. On 28 April, after only a few weeks at sea, Fletcher Christian, the master’s mate, led a mutiny and commandeered the Bounty. He set Bligh and 18 loyal crewmen adrift in a 23-foot long launch. Despite being given little in terms of navigational tools, Bligh reached Coupang (Kupang, Timor) on 14 June 1789, after a 3,500 mile long voyage. During this hazardous journey Bligh charted and named parts of the unknown north-east coast of New Holland (Australia). His incredible skill as a navigator and his courage as a seaman, ensured his continued employment by the Admiralty. 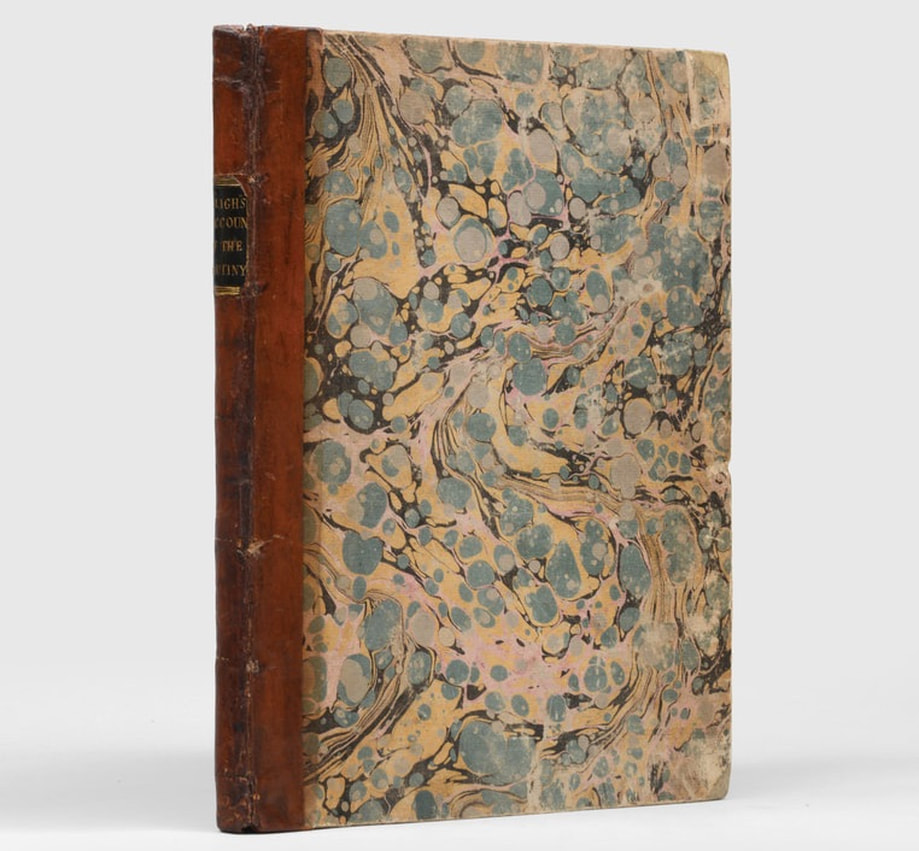 This image and below shown open : A fellow officer’s copy of Bligh’s personal account of the famous mutiny on the Bounty (1790). £9,500;