Just revisited this article, it's prob a year old. I've tried to adjust my pricing, but I think It's all out of the window now anyway. I did tack on the 914 idea just now though, don't all rush at once.
I had a 912 in the early 90's but it wasn't good enough for me at the time, I loved it, but was always wishing the 12 was an 11. After a few months regrettably, I only had eyes for a used 964 from Merlin on Hayden Road In Nottingham. The 911 (964) was the dream car of my youth, which I think I'm still paying for. My Friend had a 944 turbo at the same time and we sometimes swapped cars for the weekend. The 944 turbo was the better car, when we did play my Carrera 2 was a match for the 944 off the mark but in third with the turbo spooled up not many cars could touch that black 944 turbo.
Quite simply I had the 912 too early in my car buying life, I checked the DVLA to see If It was still around but It isn't, testament to how they were valued back then I suppose.
The 911 (964) was stolen and then written off, nothing glamorous I'm afraid. Although I'll always have racing a Renault 5 GT Turbo around le périphérique driven by, well Alain Prost springs to mind, but that's another story.... pauliepaul

Ok I might be a little late with this one, you will have to work very fast...

The 911's older brother was a little bit more VW than Porsche. The most you got in the engine compartment was a 2.0 type 4 VW unit. This was still well under 100 bhp.

What you get today with a 912 though, is the older brother of the brother who has won gold! (911 values are through the roof!)
​And with the same Mum & Dad as the 911 it's time to recognise the 912's true purity of design.
Same looks, ( Fuchs alloy wheel's a bonus, most will have wheel trims) same quirks, better handling by far; Just not as fast, although the weight saving the flat four gives over the flat six makes for a glorious drive.

Whatever car you look at, If you do go alone, take it for a long long drive, try and get into a trafic jam and get It nice and hot, check the heater works, heat exchanges are expensive. Do a change down into 2nd gear when you don't need to to check the syncro. Do all this and if you still like it, offer him/her half of what they are asking. Just  don't buy someone else's headache - buy someone else's pride and joy/project. Having said that - If you have the cash and can afford It, buy the best!
Below is one for sale at a top price, he'll probably get It...or hang on a minute, I've just had a great idea....BUY A 914! 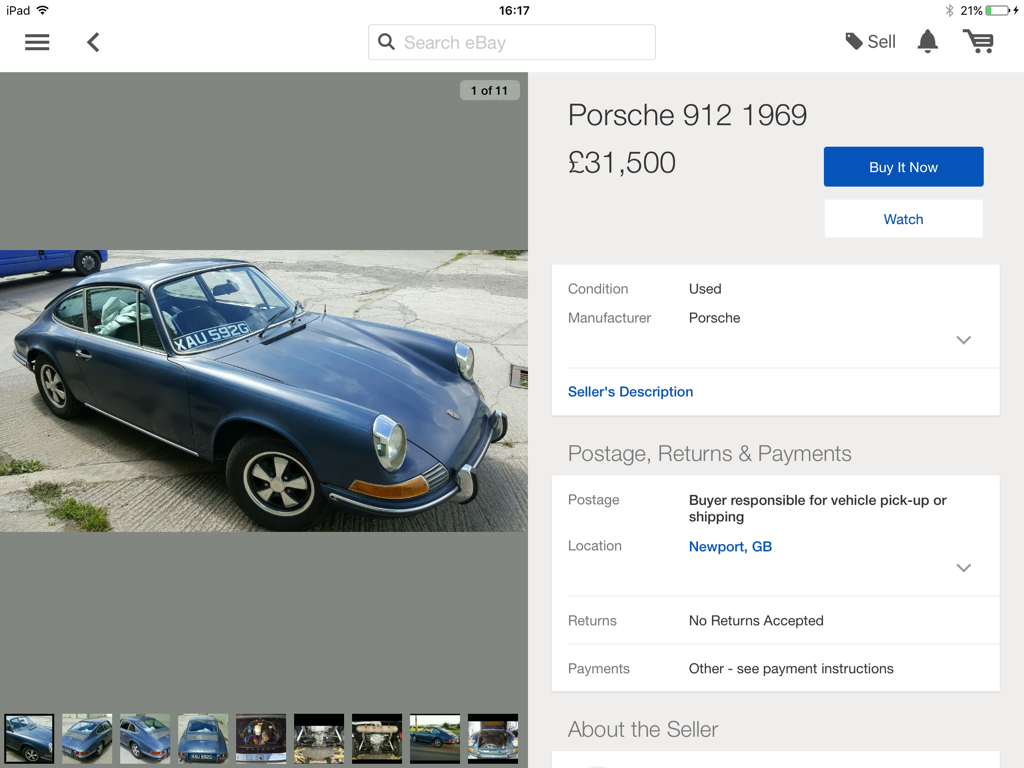