Sophie Sheehan was at The Royal Albert Hall to see Snarky Puppy for Phacemag.
​14th November 2019

Snarky Puppy.com
It’s a Thursday night and a huge crowd braves the cold and makes their way to the iconic Royal Albert Hall. They are here to see the Brooklyn-based band Snarky Puppy grace the stage. As I was soon to discover, Snarky Puppy, large in number, musical instruments, and presence, are eccentric to say the least.
Having not heard the band’s music before, and therefore not knowing what to expect, I am intrigued to see such a mixed audience pile into the venue. The audience was an eclectic mix of people of all ages and styles, and this rich variety certainly foreshadowed the new band, and sound, I was about to be formally introduced to.
As the performance starts, a seemingly endless queue of performers enter onto the stage. The result: two guitars, four keyboards, two drummers, one trumpet, one violin, two saxophones, and one bongo player. It’s quite a wonder how they all fitted on the RAH’s stage. Even more of a wonder, was how these sounds all mixed together. The performance that followed was… intense. With an assembly of such numerous and varying instruments, the majority of which came in (at least) pairs, the sounds that followed were mighty, and oftentimes fighting against each other. The internal – on-stage – sound battle was accompanied by a (somehow) consistently-sporadic musical body, and a light show that flooded your eyes with blinding rays of light each time a particularly intense note was played by a band member (which was a lot). Even for me – a lover of intensity, dramatic contrast, and impassioned music – this was far too much to experience in one go. - Cont below 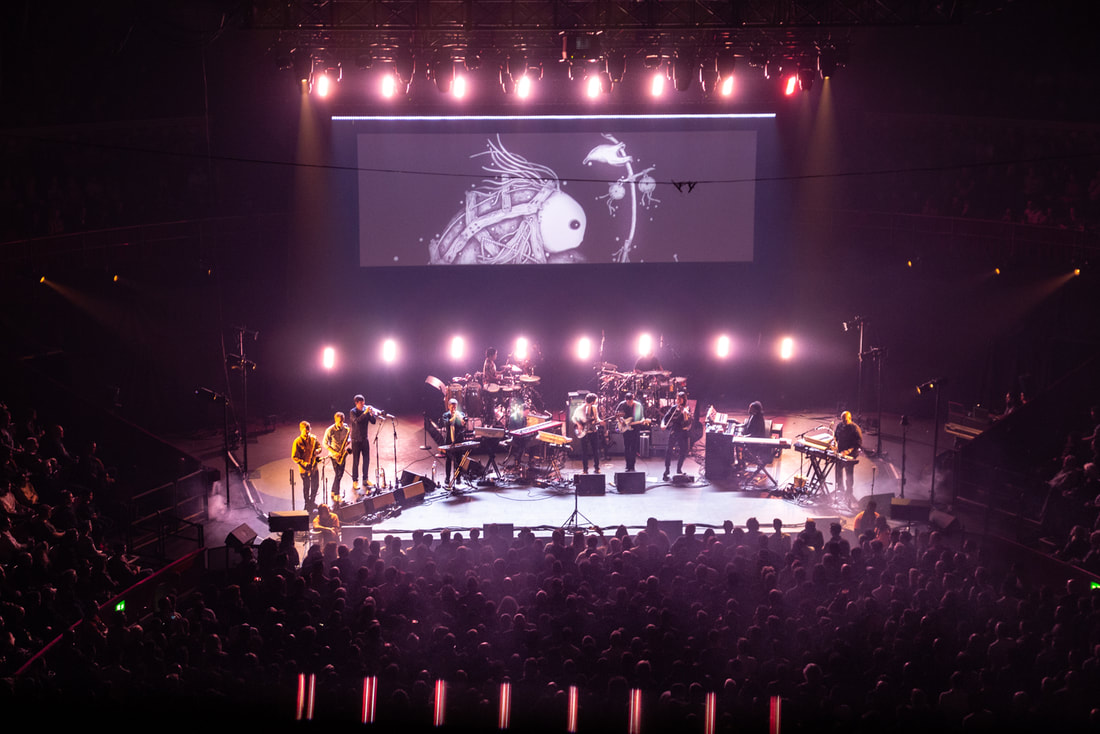 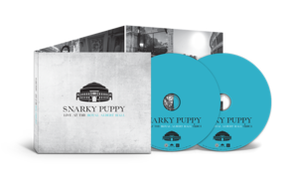 Pre Order Live Album
That being said, however, the audience members around me were loving it. The only way I could gage that one song had ended, and another was beginning, was by the mighty applause the audience erupted in each time. It seems then, that Snarky Puppy have a kind of cult-ish dedicated fanbase, the type band’s often have when their music is this unique, where one can be said to either ‘get’ or ‘not get’ their sound. This is of course true in their wider musical context, for they perhaps best belong to the genre of jazz, which is iconically controversial – the marmite of the musical world.
Whilst this kind of sound may not be for me, it was loved by their audience, and Snarky Puppy have received impressive critical acclaim, including 3 Grammy Awards. Whilst best-enjoyed by those with the acquired taste, their performance at the Royal Albert Hall certainly showcased an abundance of musical skill, with the majority of the band’s many performers being allowed to shine with spot-lit solo-moments. Furthermore, it was heart-warming to hear the band’s lead, Michael League, talk about their humble beginnings in the UK, being recognised by an English fan for the first time, and how their journey has led them to this moment: performing in one of the UK’s most iconic, beautiful, and treasured venues (with a 5,000 capacity!).
​Sophie Sheehan
share
google.com, pub-1336815800049544, DIRECT, f08c47fec0942fa0