Tess and The King of The Wildcats
The 7th Tess Adventure (awaiting illustration anyone?)
by pauliepaul 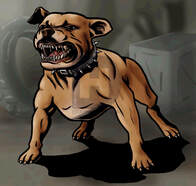 Spike One protecting Tess
As the Spikes heard Tess they were already facing down the wolves who were backed up against the wall of the cave opening, disarmed by the unnatural ferocity of the two fighting dogs. The Spikes were bred to be without fear and the wolves sensed this. They were wondering where on Earth these dogs had come from. They were half the size of a wolf but were as wide as they were tall, with the largest heads and muscled jaws that the wolves had ever seen on any dog.
​
Introducing the wolves into Scotland had been a controversial decision. Although they were originally native to the Highlands, it had been many years since they had become extinct, due mainly to the interference of man. The wolf pack that had been introduced into the wilds of the Scottish Highlands almost a year before also had problems. The pack had been raised in captivity, but had been living as wild animals in a reserve for almost two years before the transfer.
The leader of the wolf pack, who had been named Caesar, was a very experienced and intelligent animal. He was aware of the situation and with help of the animal council, which Owl, along with two others had headed, had tried to prepare the pack for the move. They had explained as much as they were able to, about what the wolves could expect in their new habitat. They had described it well and all the pack were looking forward to the move. Not just to the new life, but to living in one of the lost wolf habitats, having the chance to restore their species and work towards an equilibrium with nature, as nature had intended.
When everything was set for the move of the wolf pack, the animal council had provided Caesar with guidelines that they knew would be very important for their integration. One of these guidelines was stressed to the wolf pack by Caesar many times.
“We must NOT attempt to have any conflict with the Scottish Highlands’ indigenous predators. Namely the wild cats. These animals are trying to survive against all odds and we will live with them and hunt alongside them!”
This was the number one rule. The animal council had considered it the largest threat to the wolves’ success and every wolf had it imprinted in their mind, even the adolescent, boisterous male wolf named Natas, a vain pretender who looked at his reflection every day, longing for the time he would be the leader of the pack. Even Natas knew the importance of this rule.

​What then happened a day before the move could not have been foreseen by anyone? The one thing that was supposed to help the wolf pack leader. The veterinary care and quarantine of Caesar had failed and a stupid mistake meant that the powerful intelligent wolf pack leader had been infected with Canine Distemper. A cruel disease that killed dogs and foxes by the hundreds. But worse, three of Caesar’s most trusted and experienced wolf companions had also been affected.
Owl had called an emergency meeting of the animal council as soon as she had heard the terrible news.
Of course there was nothing they could do. The wolves would be rehomed as planned, the male wolves would find their position within the pack, without any trusted experienced leader and Caesar would re-join them as soon as he recovered from this life threatening disease…